Trump's relationship has frayed even with Rudy Giuliani, as he reportedly stiffs former mayor's legal fees 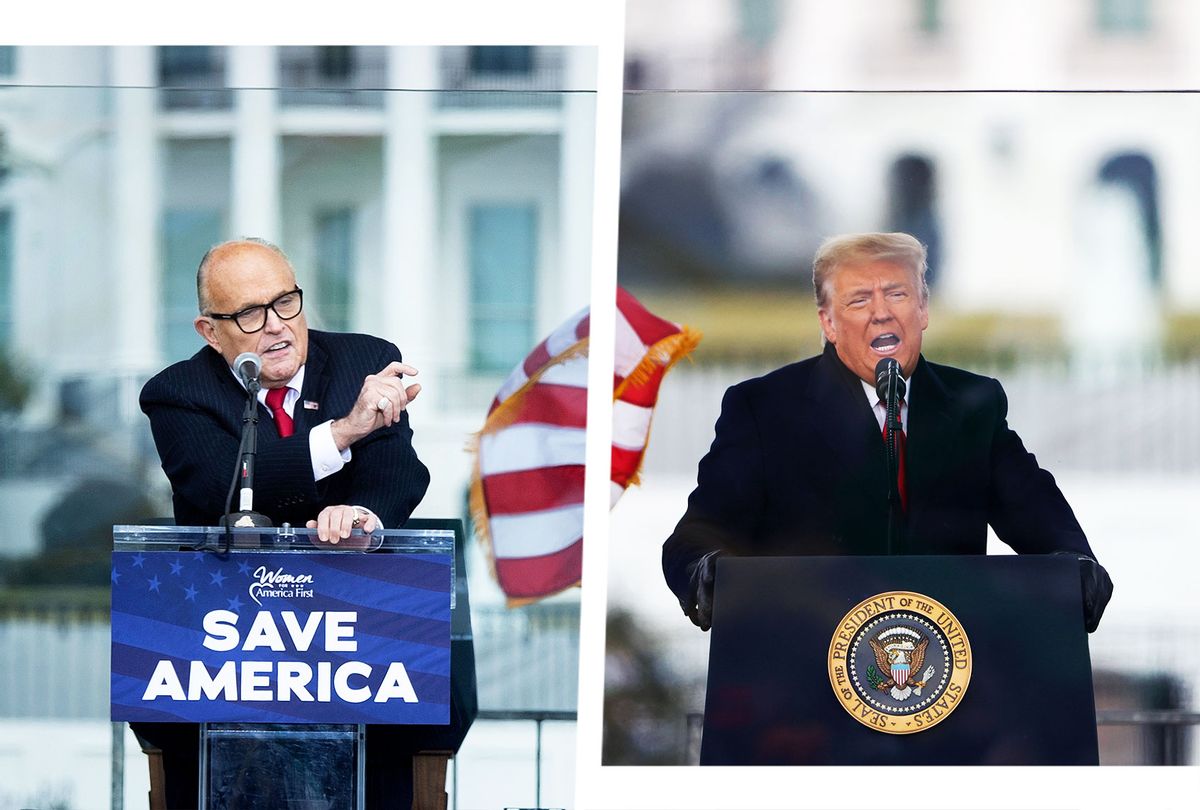 Minutes after the House of Representatives dealt President Donald Trump a staggering blow in his final days in office by impeaching him for the second time, he held a private White House ceremony to give the National Medal oof Arts to country music star Toby Keith. The moment was strikingly different from 13 months before, according to inside reports, as the outgoing president's support system of allies and friends has dissolved almost entirely amid his desperate election challenges and insurrectionist rhetoric. Some have abandoned him, and some he cut away himself, such as Vice President Mike Pence and former LifeLock spokesperson Rudy Giuliani, who has long been understood as be one of Trump's most loyal defenders.

Notably, Trump has also been deprived of his Twitter account, which throughout his term had served as both an outlet for his rage and a virtually bottomless source of validation. Even if he were still online, frankly, the tweets themselves would not be the same.

"100% Republican Vote. That's what people are talking about. The Republicans are united like never before!" he tweeted first thing in the morning on Dec. 20, 2019, after his first impeachment. He could not make that claim about Wednesday, when 10 Republican members of Congress, including third-ranking GOP leader Liz Cheney of Wyoming, voted against him on the charge of incitement to insurrection ahead of the attack on the Capitol last week.

Additionally, with less than a week left in his presidency, Trump's own inner circle has further tightened, and he has unleashed his anger on staff who have not yet bailed out on his administration, The Washington Post reported Wednesday night.

Last week, Trump blew up his relationship with Pence, who declined to carry the president's water on Jan. 6 as he had for the last four years, according to The New York Times. Trump's decades-long friendship with Giuliani has allegedly also frayed, despite the former New York mayor's loyal and rabid defense on his client's behalf.

Trump has reportedly directed staff members to stiff Giuliani for his legal fees, two officials told the Post, and ordered that he personally approve any reimbursements for his personal lawyer's expenses, which presumably were logged while traveling the country to make the president's baseless case in courts, state legislatures and the press. In fact, Trump has criticized some of Giuliani's decisions in that time, according to the Post, and bristles at the $20,000 daily rate that the former U.S. attorney reportedly requested, although Giuliani has made efforts to deny that. (Salon reported that the Trump campaign appears to have flown Giuliani from Washington to Philadelphia on Trump's private jet the day after the election, at a cost to donors of $16,000.)

Ahead of the electoral-vote ratification in Congress last Wednesday, Trump reportedly told Pence, "You can either go down in history as a patriot, or you can go down in history as a pussy." The president then blasted Pence in a bombastic speech, rousing a mob of supporters who then laid siege to the Capitol, chanting "Hang Mike Pence" and hunting the halls for the vice president as he tried to coordinate a military response, while his boss watched on TV from the West Wing.

On Wednesday, Pence was among a cadre of close advisers, including son-in-law and top aide Jared Kushner, who urged Trump to put out a video statement after the House vote, in which the president, while expressing no specific remorse, condemned the attack in much clearer terms than in the video he released the day of the riot, when he told the invaders, "We love you. You're very special." Still, officials told The Times, aides had to convince Trump it was the right decision after the message had posted.

Among the staff who crafted language for the video were White House counsel Pat Cipollone and Stephen Miller, Trump's top speechwriter and close adviser dating back to the early stages of his campaign.

In another sharp contrast from 2019, congressional leaders have enraged the president, including Senate Majority Leader Mitch McConnell, whose wife, former Transportation Secretary Elaine Chao, resigned after Pence took the 25th Amendment off the table. McConnell has reportedly told people he supported impeachment in the House, and may vote to convict Trump in the Senate. Trump has reportedly expressed even more anger for House Minority Leader Kevin McCarthy, who voted against impeachment but condemned the president from the House floor, and, after two months of prevarication finally stated that Trump had lost the election and that Joe Biden will become president next week.