In this history-based film Cassius Clay, Malcolm X, Jim Brown and Sam Cooke hung out one night and made magic 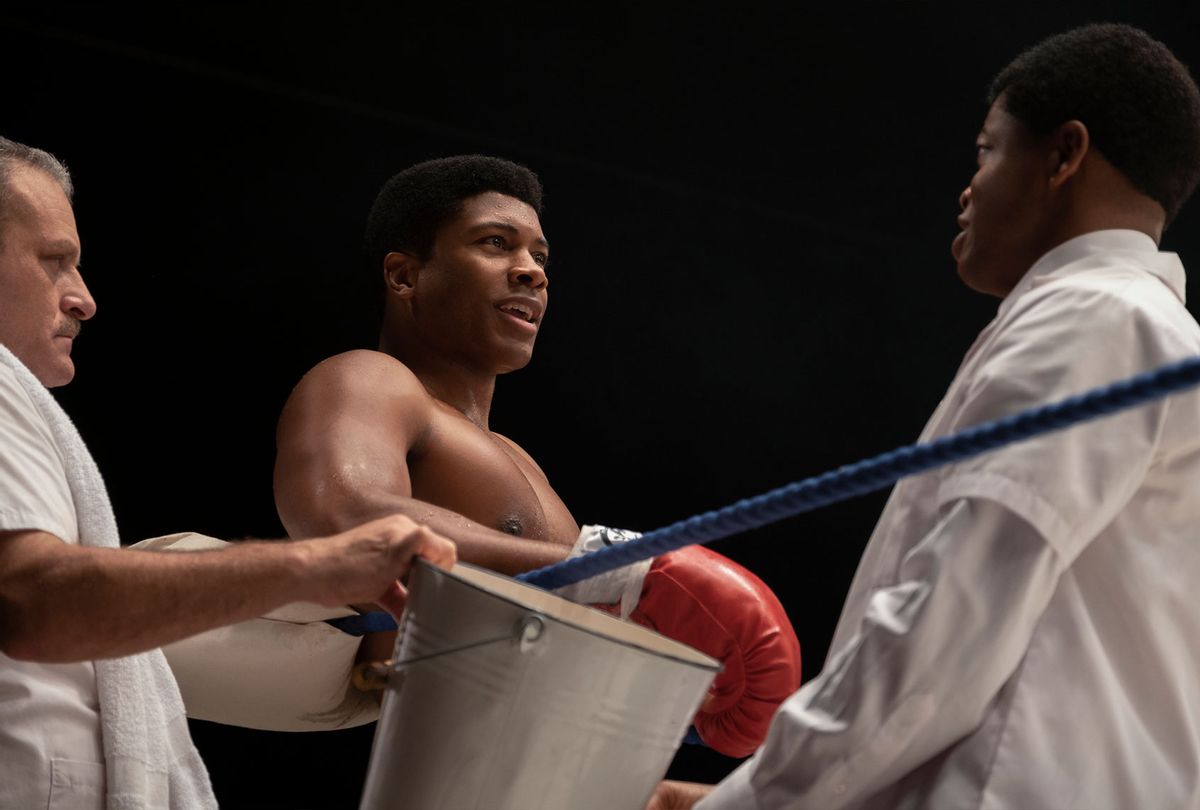 Eli Goree as Cassius Clay in "One Night in Miami" (Amazon)
--

In "One Night in Miami," director Regina King imagined version of the February 25, 1964 encounter between four icons, Cassius Clay (Eli Goree) and soul legend Sam Cooke (Leslie Odom Jr.) head out to a local liquor store to grab a bottle. It's a clear night, and they encounter a pair of young men who first ogle Cooke's stunning sports car before exploding with glee at recognizing the boxer off of his first world championship win.

Cooke sends the boys off with cash to buy something for themselves, and the pair sit for a moment in Cooke's fancy ride and process what waits for them back in the hotel room where their two other companions Jim Brown (Aldis Hodge) and Malcolm X (Kingsley Ben-Adir) are waiting.

Malcolm and Cooke are fresh off of an intense argument, with the firebrand accusing the crossover singer of failing to use his success to help the civil rights cause. The liquor store run is Cooke's way of retreating; back in his car expresses his frustration to Clay.

Playing the role of a wise corner man to Cooke's fighter, Clay tells the singer to shrug it off. "We have to be there for each other. Because can't nobody else understand what it's like being one of us," Clay says, "You know: Young, Black, righteous, famous, unapologetic."

Scenes and moments like these make it easy to understand why Regina King chose Kemp Powers' stage play as her directorial debut. King might as well be the embodiment of that truth, a multiple Emmy, Golden Globe and Oscar winner who found her wings by way of projects that tell the world about itself past, present and future.

Here King lets narrative ingenuity permeate each frame as she remains behind the camera, drawing us inside this circle of legends, each of whom represents distinct aspects of Black identity and struggle.

"One Night in Miami" is expressly about these men, and it is not the first work about three out of four of them. But it may be the first one that lets us know them in ways previously not revealed both despite and because Kemp stakes his vision between entry and exit points that are confirmed history.

The story is based on the night following Clay's unexpected victory over reigning heavyweight champion Sonny Liston in February 1964, a bout that drew Brown, Cooke and Malcolm to Miami, Florida to cheer him on. The next morning Clay confirmed his conversation to Islam at a press conference, reintroducing himself as Cassius X. (He wouldn't officially be known as Muhammad Ali until some time later.) As for what transpired during the time they spent together in the interim, no recordings exist.

But Kemp's conjecture comes from a place of profound understanding about the burden of greatness and the unique exertion bearing it presents to a Black man, even legends in the making like them. Kemp writes this thesis for their individual personalities, and King shapes them for the screen not as icons but as men.

Cassius Clay's win is only one significant moment linked to that gathering, which Kemp presents as an unsung point where multiple histories converge.

With the majority of the action in its 114 minute runtime taking place in a modest motel room, King and cinematographer Tami Reiker cannot help but emphasize the physical and spiritual closeness of these men, with Malcolm's passion serving as a binding, strengthening tie in some scenes and divider in others. Simple though the setting may be, Reiker films the interior with a glow and the exterior with a buoyancy to which the figures escape, as Clay and Cooke do, or regroup.

Malcolm would make his pilgrimage to Mecca and publish his memoirs shortly afterward, and a year after their meeting he'd be assassinated. Jim Brown's first starring role in a movie happened that same year, launching an acting career that carried him through several decades during and after his professional football career ended. Sam Cooke was already a successful hitmaker who would release "A Change Is Gonna Come" that same year 1964 . . . and sadly, be killed by a motel manager in December.

Kemp uses the fact that Brown's movie debut and Cooke's stirring social justice piece also came out in 1964 to inspire the tense direction in which several conversations head.

Malcolm knows he's being followed. Sam is wealthy and famous, and can't even book his own room at the fancy hotel where he's staying. Brown is a record holder in the NFL and the pride of his hometown, according to a white supposed friend of the family who he visits as the film starts. The man, played by Beau Bridges, is gracious and smiles broadly as he showers the athlete with laurels, and he sounds equally polite when he refuses to let him in his home, using a dehumanizing epithet that rolls of his tongue sweetly as peach nectar.

Hodge, it must be said, showcases his astonishing talent for blaring his character's emotion through his eyes and face even as he's quietly speaking his lines. That silent expressiveness consistently powers all of best performances, and in this he pours a heat and a stoic fortitude into it that draws your attention whenever he's featured.

The personal nature of these talks, even at their harshest, always return to the timeless question of what the successful and famous owe to those who are struggling without the benefit of fame. This is a film that's careful to point out that celebrity only liberates Black stars to a limited degree and, in some cases, makes the target on their backs even brighter.

By virtue of its premise, "One Night in Miami" is a showcase for its cast. Where most historical fictions tend to expand upon documentation to tell a story, and where the actors might consult photos or video footage to sculpt their portrayals, this film finds life in guesswork at what transpires away from the public, from cameras, where there's no need to put on a show.

In doing this the actors, writer and director prioritize the humanity in these men as opposed to presenting yet another impersonation of an icon.

This approach is most apparent in Goree's take on Clay and Ben-Adir's recreation of Malcolm, two figures played by two of the Hollywood's biggest Black stars. The actors retain enough of each man's distinct idiolect for us to recognize their individual manners of speaking, but they also expand upon the familiar curve and edges in common impersonations to convey a sense of who they were and how they may have behaved in quieter moments.

Goree is playing a version of the boxing legend that is newly famous yet still humorously devoid of humility. Ben-Adir, who recently played Barack Obama in Showtime's "The Comey Rule," contrasts this with a version of Malcolm aware of his mortality and the danger he has courted by speaking the truth to white America. This lends a gentle approach to his performance, showing Malcolm as a father and a husband worried about the direction the struggle was headed in and the danger.

But here the actor steers into the gentle passion of Malcolm instead of drawing inspiration from the grim-set face popularized by history book photos, and this enriches the character in fresh ways.

Odom, however, steals the spotlight in a moment when it seems as if Malcolm is set on pounding him into the dirt. When Malcolm follows up a blistering dismissal of his greatest hits by playing Bob Dylan's "Blowin' In the Wind" and asking him why a white man is writing lyrics that do a better job of speaking to Black folks than he does, Odom launches Cooke out of the chair where he's been taking it and turns it around: Why can't Malcolm respect his focus on business investment, ownership and expansion? And isn't that as crucial to uplifting Black Americans as words and songs? Odom recites this with the energy of a swordsman dueling to the death, and it's incredible to watch.

Conflict makes up only a small part of "One Night in Miami," yet another blessing King gives us in making this film. There are so many Black movies inspired by history that are colored by pain and so few that rest easily and securely in celebration, leaving the viewer with a sense of blossoming joy and pride.

At one point, one of them observes that Black power, a phrase white Americans grow to fear, is not offensive or aggressive. Power just means a world where we're safe to be ourselves, he says. This is King tapping into her power as a director for the first time, and what we've seen makes us excited to plug in to future efforts.

"One Night in Miami" is currently streaming on Amazon.