Who loves America? Inciting a riot to sack the Capitol gives us the answer 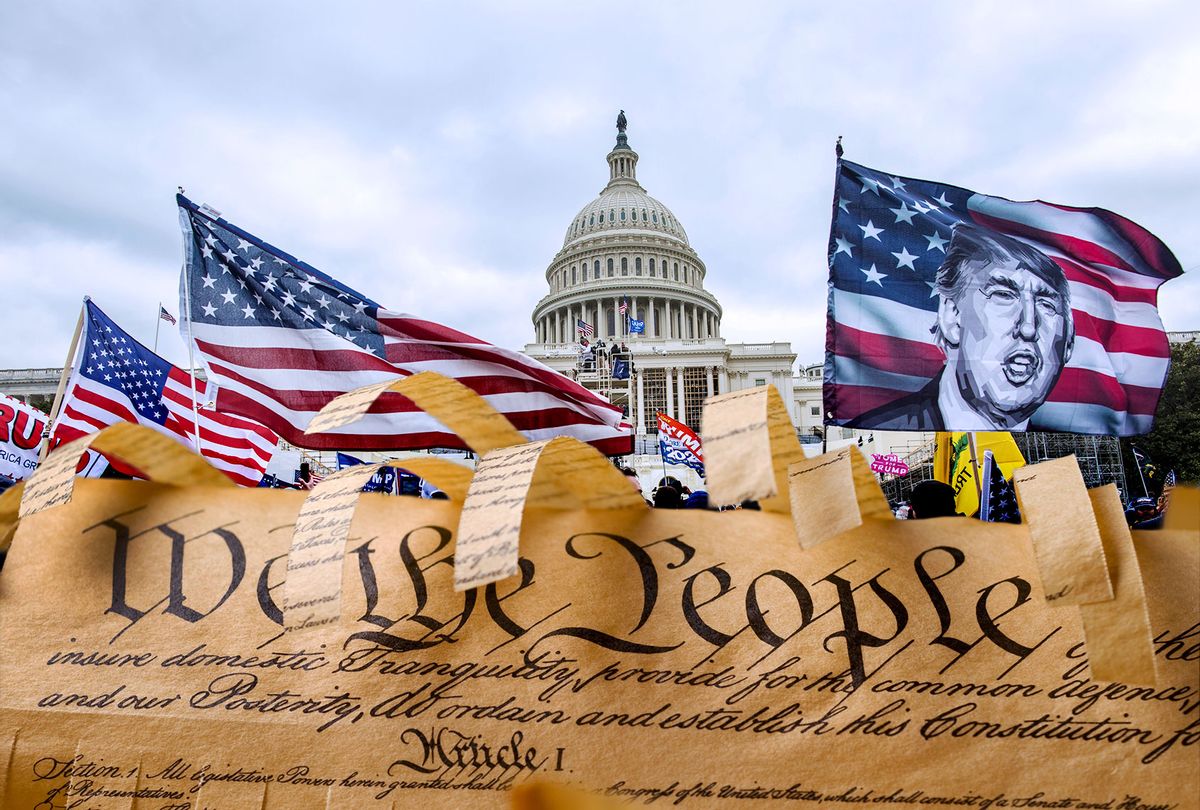 At its core, the Constitution of the United States sets forth the rules for attaining power, limiting power, sharing power and transferring power. With his speech on the Ellipse on Jan. 6, Donald Trump violated every one of them. A man obsessed with power and panicked about losing it threw away his oath to protect and defend the Constitution and incited a mob to violate his oath alongside him. With the same lies he used to get elected president in the first place — the lies of racism and white supremacy, and fealty not to country but to tribe — he whipped his crowd of followers into a frenzy and set them upon his enemies in the Congress, the body which was at that moment certifying the election of his opponent, Joe Biden, as president. He told them Biden's election was illegitimate. His presidency was being stolen from him. His followers were to "stop the steal" by stopping the count of the legitimate votes of state electors in the Electoral College. He encouraged his mob, nearly every one of them white, to steal back the election from Biden and return him to the White House.

If you hate democracy and the democratic process, you cannot love the country founded on those principles. Donald Trump hates America, and he has managed over four years to turn the Republican Party into a party that hates America along with him. Here's the beauty part. They are guilty of the very thing they accuse their opponents of every day: That quarterback over there taking a knee during the National Anthem? He hates America. Those Black Lives Matter protesters against police brutality and the killing of unarmed Black people in the streets? They hate America. Those doctors in that Planned Parenthood clinic providing safe and legal medical procedures to women, everything from pap smears to abortions? They hate America. Those brown mothers and fathers and their babies at the border seeking asylum in this country, protection from killings and persecution at home? Amazingly, they hate America, the very country in which they seek shelter and want to join by becoming its citizens.

You want to talk about turning logic upside down on his own head? Looking at a blue sky and declaring it is black? Ladies and gentlemen, I give you Donald Trump's Republican Party. He has remade it in his own image. He has turned the party of Lincoln into the party of George Lincoln Rockwell. He has brought the Confederate flag into the hallowed halls of the Union. He re-fought the Civil War, and having lost yet again, he has created a new Lost Cause: today's Republican Party.

The 149 Republican members of Congress who within hours of the sacking of the Capitol voted against certifying the electoral ballots of Arizona and Pennsylvania — in effect, to steal the votes of citizens and throw them away — they think they don't hate America. But they voted against democracy immediately after a howling mob of insurrectionists had been driven from the halls of the Capitol. With their votes, the new Republican Party pledged allegiance not to America, but to Donald Trump.

This is where we are, folks. Remember the two-party system? It's over. One of our political parties, the Republican Party, has allowed itself to be taken over by revolutionaries and insurrectionists. We now have one political party and a mob.

The Republicans have also sought to tear apart the system of checks and balances established in the Constitution by seeking to turn one branch, the judiciary, into an outpost of their party. They have packed the courts with factotums loyal not to America, but to them. They made no bones about what they were doing. They even went so far as to establish a mechanism for the destruction of the judiciary, an association from which they drew judicial candidates who would rule not impartially, not loyal to their oaths or the Constitution or the rule of law, but to the party that put them on the bench. Not satisfied with disabusing logic and law, they turned language upside down by naming their authoritarian club the Federalist Society. You can almost hear them chortling every time they meet in one of their little conclaves to dine and lift toasts to their anti-democratic goals.

That's why the assault on the Capitol last week was more than a mob scene of trespassing and looting and destruction and desecration. It was an attack not on a building but on the Constitution itself, on the principles the country was founded on. Sure, they displayed Confederate flags and broke doors and windows and attempted to locate and kidnap congressional leaders and the vice president. They violated numerous laws, which are now listed in the indictments being handed down against them. And much has been made of the hypocrisy of people who carried flags displaying the thin blue line of "Blue lives matter" battering and even killing the police officers who tried to defend the Capitol.

But the real crime of the mob was not loving the country which has given them a place to prosper in good times and succor in times of loss and distress. Many of them wore military-style camouflage clothing and Kevlar helmets and vests, but few of them actually served their country as soldiers. The "patriotic" slogans they shouted marked not only the death of irony, but the death of democracy itself. Like husbands who batter their wives and children, when they're caught they claim they love what they sought to destroy. Their protestations don't merely ring hollow, they are a mark of the system of oppression they represent.

Wednesday, Jan. 6, 2020, was Donald Trump's America writ large. On display was the inverse of the country we have always seen ourselves as, the country that told the rest of the world, "Give me your tired, your poor, your huddled masses yearning to breathe free, the wretched refuse of your teeming shore," and we will welcome them and give them warmth.

Donald Trump's Republican Party took those words and laughed at them and threw them in the trash. They will continue in their campaign of hate and destruction. If we let them, we won't have a country to love anymore, because they will have hated it out of existence. It's our choice.