Treating public schools like businesses is only making them worse

Schools have come to resemble businesses, with corporate metrics for measuring success and worse outcomes for kids 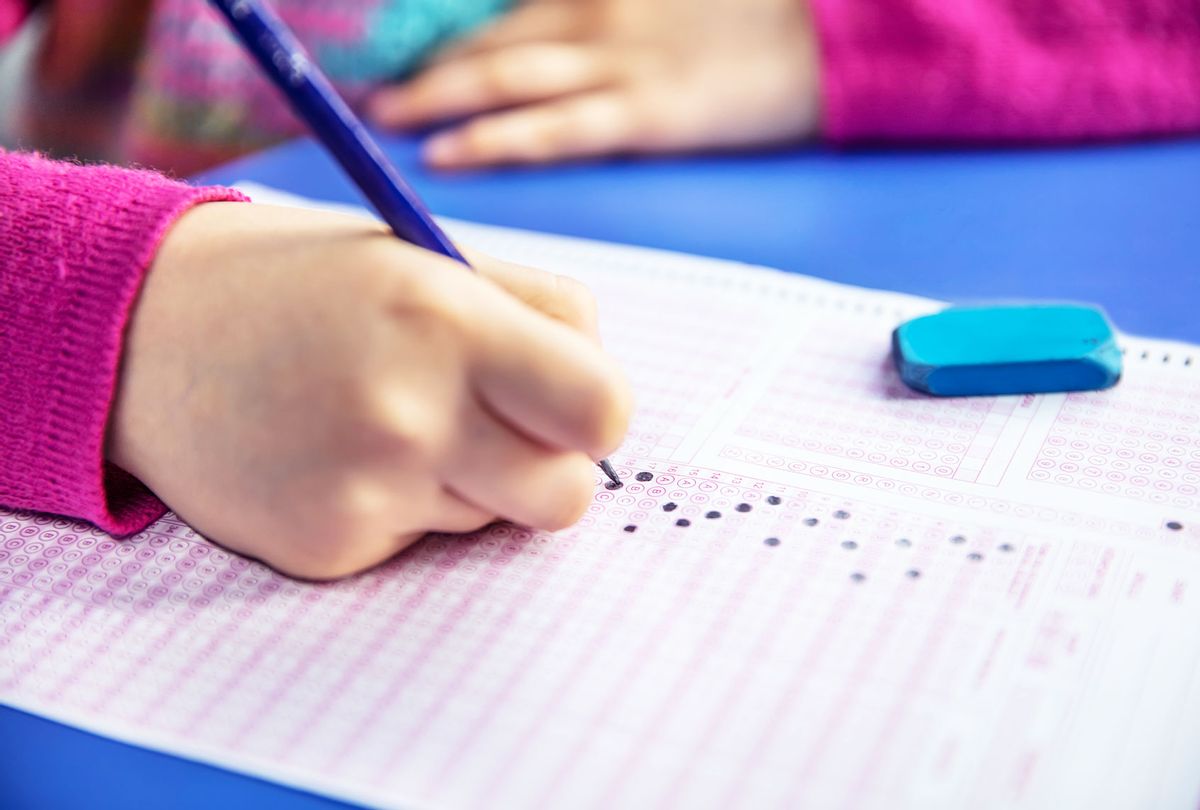 A student filling out a testing sheet (Getty Images)
--

In the early 2000s, the U.S. adopted a model of education that promised to jumpstart the performance of failing students and hold teachers and administrators accountable. While well-intended, the means they employed were rooted in a market-based strategy that didn't recognize, much less address, the profound structural causes of school and student underperformance.  The three most formative pieces of education legislation of this era were the No Child Left Behind Act (NCLB) of 2001; the Race to the Top Act (RTTT), signed in 2009 by President Obama; and the Every Student Succeeds Act (ESSA) of 2015, also signed into law by Obama. Each one doubled down on a pay-for-performance model that robs teachers of their ability to be creative and dehumanizes students.

In a recent chapter in education legislation, President Trump signed an Executive Order authorizing the use of funds from the Community Services Block Grant by students who are denied in-person learning. The order permits the use of money for a wide range of private school opportunities. This may appeal to some who are frustrated with the state of education, but it risks further draining funds from the public school system and harming the common good that is public education.

No Child Left Behind was signed into law in 2002 and used student test scores to gauge which schools were performing at acceptable levels. The concept of "teaching to the test" was born. And later on, Race to the Top (RTTT) was a competitive grant implemented by the Obama administration, in 2009-2010 only, as part of the American Recovery and Reinvestment Act. RTTT solidified the reliance upon student test scores as a condition for increased funding. While these flagship pieces of legislation relied on components of a capitalist market supply and demand model to produce innovation, they ultimately fostered a climate of toxic competitiveness and anxiety. Sadly, in 2015 NCLB was re-authorized for 50 years as the Every Student Succeeds Act (ESSA), further cementing an educational climate of test and punish with regards to funding.

The incoming Biden administration is facing unrivaled crises of humanity. It needs to examine the legacies of NCLB, RTTT, and ESSA, and make course corrections before it's too late.

The Organisation for Economic Co-Operation and Development (OECD) is a global coordinated effort to measure human development. It tests literacy of students aged 15 years old, randomly selected from 25 countries, through the Programme for International Student Assessment (PISA.) No Child Left Behind reflected a time (in 2000) when the US ranked 15th in global literacy scores, and last in student engagement in reading, compared to 24 other countries. NCLB effectively responded to these results by recognizing American students were not being prepared to compete in the global marketplace. Moreover, PISA results suggested that the US was lagging behind in the development of human capital and the future workforce.

Not very coincidentally, this is when the Bill & Melinda Gates Foundation was founded, with education among their top 3 priorities. There was an infusion of capital into private, commercial education spaces as a means of creating competition to traditional public and private schools. The result was Common Core State Standards that satisfied NCLB. It set out to:

With No Child Left Behind, schools evolved into businesses and adopted corporate metrics for measuring success. The Department of Education was determined to measure the effectiveness of schools through standardized testing and hinged funding on all-important scores. Specific tests were adopted by states in order to comply with accountability demands in NCLB. Schools that failed to show improvement, and struggled, were punished with less funding. Clearly, this approach is counterintuitive to solving human-centered problems and, perhaps unsurprisingly, ultimately contributed to further inequities in lower income communities.

The stress placed on schools, administrators, teachers, students, parents, and families around testing became the focal point of curricula and student activities. The adoption of Common Core State Standards was funded by a $200 million dollar grant from the Bill and Melinda Gates Foundation. With this financial package came a critical turning point in education history. A rigid, formal, and consistent testing structure was replicated in diverse communities all over the US. It intended to increase critical thinking skills by increasing complexity — yet it has had negative results. With metrics hinging upon testing — and the resulting boost or decrease in funding — education professionals and students are put in an impossible position, where authentic learning gets shelved in pursuit of test scores and funds. Even the U.S. Department of Education admitted that No Child Left Behind's "prescriptive requirements" have "become increasing unworkable for educators."

NCLB is the legal mechanism that required schools to treat students as receptacles of information, much like computers, to be trained in regurgitating information. Input and output became the guiding dynamic of the classroom. NCLB increased the level of sorting, segregating, and ranking of students by tying test scores to funding.

This method of classifying people has an ugly history in eugenics and has historically been used in advancing a white supremacist agenda. NCLB further established the American education system as a factory Unfortunately, its main product has proven to be what I call Educational Trauma.

Race to the Top was a one-year competitive grant that increased the demands on states to produce innovation in education, improve data collection, enhance standards and assessments, increase teacher efficacy, and revive underperforming schools. Bold in ambition, RTTT further cemented the use of standardized tests with all the racist and classist history it thrives upon. Yet the beneficiaries of the most funds from RTTT were California, New York, Texas, and Florida. In other words, tying student performance on tests to funding promoted competition for funding, and then restricted the bulk of it to just 4 states.

This is not the goal of education as a common good in a democracy, and solidifies the US as a country that actively supports movements that punish the poor and marginalized while benefitting the wealthiest, whitest, and most powerful. This is a perfect example of the Matthew Effect in action: Race to the Top happened over 10 years ago, and yet the effects are seen vividly in the present moment.

The 50-year re-authorization of NCLB in 2015, as ESSA, seemed like the nail-in-the coffin for tying funding to test scores until President Trump signed an Executive Order in December 2020. Until now, this re-authorization gave states more power, with less demands from the federal government. Ultimately, it continued to tie student test scores to funding, despite the vast amount of research revealing how flawed this method actually is.

The impact of legislative demands for student test scores as a condition of school funding is both undemocratic and a source of educational trauma. Students, teachers, parents, administrators, and communities are unintentionally harmed by ongoing practices in education. Doing harm to students while thinking it is for their benefit is the definition of "poisonous pedagogy," a term coined by theorist Alice Miller. Taken together NCLB, RTTT, and ESSA reflect bipartisan support for poisonous pedagogies, setting up future generations for underachievement and increased mental health problems.

Test-obsessed educational cultures and standards-only curricula are forms of educational trauma that result in heightened levels of stress, anxiety, and depression. It's a well-accepted fact that educational methods emphasizing standardized tests are maladaptive and contribute to mental health problems. And yet it's the law. This places the US in an unenviable position compared to other countries, and may symbolize how American children are not protected and cared for in this culture. For instance, as of 2015 the US is the only country that has not ratified the United Nations Convention on the Rights of the Child.

What is the solution? Well, the recently signed Executive Order could be of value in solving educational problems. Unfortunately, we may never see it because there is little time to implement application, selection, and disbursement criteria. Furthermore, while it could serve to mitigate educational trauma, it is intended to use public funds for religious, private, and other schools that have more latitude around selection and exclusion. It could solidify discriminatory practices in education, while also depleting public schools of necessary funding.

In the meantime, there are pedagogies that utilize multi-disciplinary approaches to solving human-centered problems with empathy—something our age cries out for. One of the most exciting is known as Design Thinking, and it has moved into educational spaces as a modern form of pedagogy that can build critical thinking skills organically, naturally capitalizing on the power of collaboration, creativity, and innovation. Design Thinking challenges students to address problems in a creative, empathic, and cooperative manner. Along the way, they can develop the practical and intellectual skills to act effectively in a complex world.

There's also the pedagogy of "democratic schools," which give power to students in the form of self-directed learning and participation in school governance. This method prepares students for engagement in the democratic process, as adults, and is very different from the testing-focused culture perpetuated by NCLB, RTTT, and ESSA. Schools such as Summerhill in the U.K. have been operating as a democracy for over a century. In the U.S., the Sudbury Valley School, which took inspiration from Summerhill, was launched in 1968 in Framingham, MA. Others like it have followed.

In 2014-15, I experimented with both of these pedagogies and applied it in a community-based school setting. Students cultivated their gifts and talents, while learning about history, art, science, math, literature, social studies, and developing critical thinking.

At their core, these pedagogies challenge the pay-for-performance model that has held sway for the last two decades by soundly rejecting the notion of education as a product or a commodity. Students are not cogs, schools are not corporations, and education cannot be reduced to numbers. The new administration would do well to remember this.

Lee-Anne Gray, Psy.D., is a psychologist, educator, author, and national speaker. She is the author of "Educational Trauma: Examples from Testing to the School-to-Prison Pipeline."