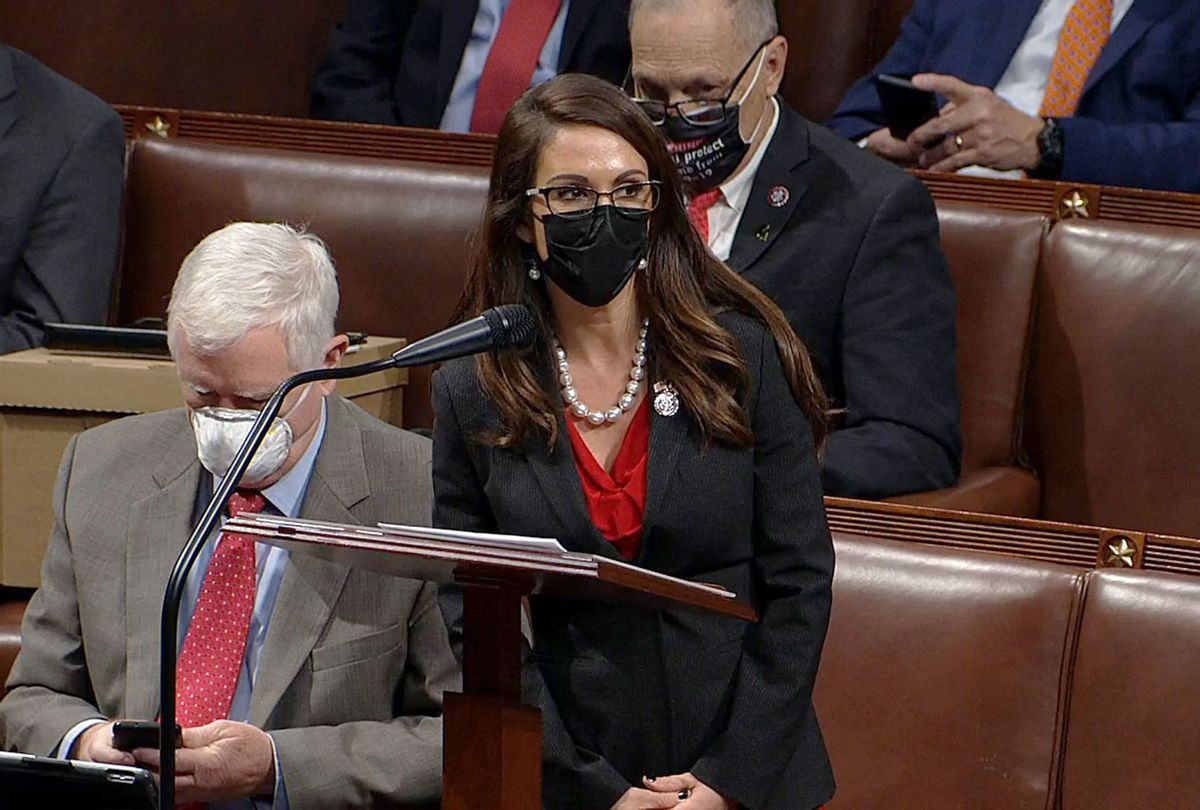 Rep. Steve Cohen, D-Tenn., alleged on Monday that freshman Rep. Lauren Boebert, R-Colo., gave a Capitol tour to a "large" group ahead of the Jan. 6 Capitol riot, which she adamantly denied.

Cohen told CNN that he and House Budget Committee chairman John Yarmuth, D-Ky., saw Boebert leading the group in the Cannon House Office Building tunnel prior to the siege, which left five dead. Cohen's comments came after Rep. Mikie Sherrill, D-N.J., alleged that members of Congress took groups on "reconnaissance" tours the day before the riot and 34 House Democrats have called for a probe into the "suspicious behavior" leading up to the insurrection. The House members noted that the tours were "unusual" because the Capitol has been closed to public tours due to the coronavirus pandemic since last March and said that some of the visitors "appeared to be associated with the rally" that preceded the riot.

"Congressman Yarmuth refreshed my recollection yesterday," Cohen said. "We saw Boebert taking a group of people for a tour sometime after the 3rd and before the 6th. I don't remember the day. We were walking in a tunnel and we saw her and commented who she was and she had a large group with her. Now, whether these people were people that were involved in the insurrection or not, I do not know."

Cohen acknowledged that he had no evidence that members of the group were involved in the riot but noted that Boebert was involved in the House GOP objections to the Electoral College results based on baseless allegations that the election was stolen, and had previously referred to Jan. 6 as a "1776" moment.

"She was a freshman, she might have had a large number of people coming to be with her on this historic occasion and just wanting to give them the opportunity to have a tour," he said. "But it is pretty clear that her team is the team — she's not on the home team. She was with the visitors."

Christopher Schuler, a spokesman for Yarmuth, told the Washington Post that the congressman saw Boebert and a large group on Jan. 3 or 4, but could not say for sure whether the group was with Boebert.

"While Congressman Yarmuth remembers there was a group of people around Congresswoman Boebert, he has no knowledge of who they were or if they were with her," he told the outlet. "He simply exchanged greetings with a new colleague and continued on his way."

Boebert was sworn in on Jan. 3 at the Capitol with all other members of the new Congress, where she was photographed with her husband and four children.

Boebert, who has demanded the right to carry her gun in the Capitol and has publicly supported the QAnon movement, which has been labeled by the military as an "extremist group," denied Cohen's allegation and accused the congressman of slandering her.

"During your interview on CNN today, you made false, slanderous statements that have threatened the safety of my family, my staff and me," she said in a letter that she published on Twitter.

"In the future, if you have concerns about my actions, as a fellow Member of Congress, please speak with me before making baseless and dangerous allegations," the letter said. "This basic professional courtesy would have allowed you to avoid the embarrassment of being caught in a dangerous lie that has compromised the safety of a Congresswoman, her family, and her staff."

Boebert said in a separate statement that she did not give tours to anyone except family members.

"Representative Cohen's claim that he saw me give a reconnaissance tour with people not on the team is 100% false," she said. "I have never given any tours of the U.S. Capitol in the 117th Congress to anyone besides family members in town for my swearing in. As Members of Congress, we have a duty to elevate the discourse and unify during times of crisis. Unfortunately, Rep. Cohen instead chose to go on CNN today to repeat irresponsible lies in order to elevate his own political relevance and to further fuel the division of our country."

Boebert, who has come under criticism for tweeting about House Speaker Nancy Pelosi's, D-Calif., location during the riot, voted to object to the Electoral College results hours after supporters of President Trump attacked Capitol police and overran the halls of Congress. She has come under heavy scrutiny for her links to militia groups and her role in spreading fraudulent election-rigging claims. She later refused to comply with new security measures installed in the Capitol. Some prominent donors have called on her to return their contributions following the riot and her communications director quit in response to the riot after less than two weeks on the job. Dozens of Colorado lawmakers have called for her to resign and for House officials to investigate her conduct surrounding the riot.

Cohen is the only member of Congress so far to directly suggest that Boebert was involved in the alleged tours. Sherrill did not mention any names when she alleged that members had given "reconnaissance" tours to riot participants on Jan. 5. Sherrill and 33 other House Democrats later sent a letter to top Capitol security officials calling on them to investigate the allegation and why the rioters "seemed to have an unusually detailed knowledge of the layout of the Capitol Complex." Rep. Jim Clyburn, D-S.C., who did not sign the letter, has separately questioned how rioters found his unmarked office but avoided his main office which bore his name on the front. The chief of staff for Rep. Ayanna Pressley, D-Mass., has said that the panic buttons in her office had been inexplicably ripped out prior to the lockdown.

Rep. Sean Patrick Maloney, D-N.Y., confirmed on MSNBC that House members had witnessed a tour group, but said he had no firsthand knowledge about it. Though he never mentioned Boebert or any other member by name, the congresswoman claimed in a letter that he "implied I was that Member of Congress" who gave Capitol tours to "insurrectionists."

Boebert has remained unrelenting since the riot, accusing Democrats of "encouraging and normalizing violence" when discussing last summer's widespread protests over racial injustice. She has refused to go through the newly-installed metal detectors in the House chamber, which were installed after House Democrats expressed concerns that "members who were in league with the insurrectionists who love to carry their guns" might aid in a potential future attack. Rep. Alexandria Ocasio-Cortez, D-N.Y., said last week that she worried "there were QAnon and white supremacist sympathizers, and, frankly, white supremacist members of Congress" that "I have felt would disclose my location and would create opportunities to allow me to be hurt, kidnapped, et cetera" during the lockdown.

"So I didn't even feel safe around other members of Congress."