Will 2021 be the year offshore wind power finally takes off? 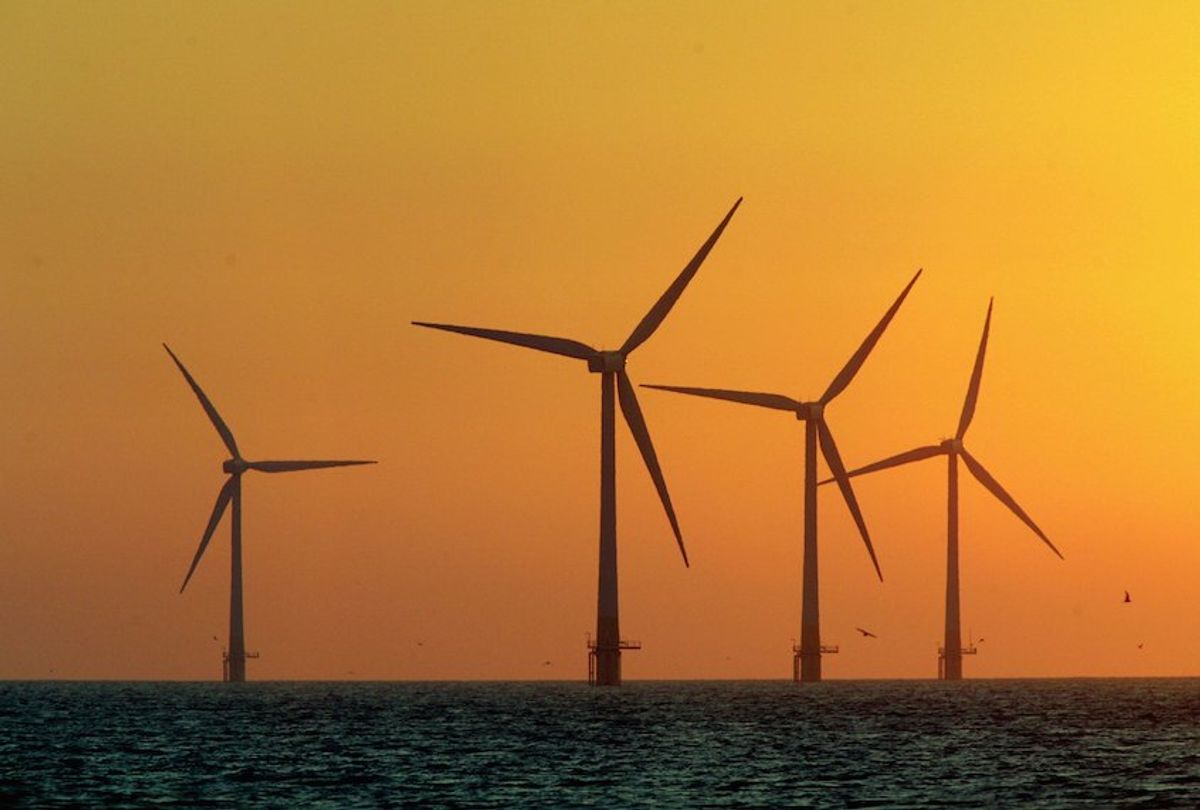 Five lonely wind turbines spin in the state waters off the coast of Rhode Island. They're the entirety of the Block Island Wind Farm, the United States' only commercial-scale offshore wind facility currently in service, with an installed capacity of just 30 megawatts.

By contrast, on-land renewables are growing. We've installed more than 100 gigawatts of onshore wind capacity and 89 gigawatts of solar.

The Block Island project, completed in 2016, remains a monument to possibility, though. And it's one that's about to be realized.

Admittedly, no new commercial-scale offshore wind energy projects will break water this year in the United States. Despite that, the industry is poised for a big year. And we desperately need it, experts say.

"If we're thinking about powering the nation in line with global climate science assessments, we need serious investment in renewable energy and serious deployment," says John Rogers, senior energy analyst for the Union of Concerned Scientists. "And that includes large-scale offshore wind."

Coastal states account for 80% of U.S. electricity demand and the federal government has estimated that offshore wind has the technical potential to supply more than double the country's demand.

In the next decade our existing five turbines could be joined by 2,000 more — a fleet of projects capable of generating 22 gigawatts of energy.

Those projects would be the result of years of work, efforts which experts say could begin to pay off this year. East Coast states have set ambitious procurement targets for offshore wind, technological advances have made costs competitive and European companies have brought their experience stateside. A White House that will soon look a whole lot greener is likely to be a big bonus.

Europe already has 22 gigawatts of installed capacity, and the European Union hopes to increase that number by 25-fold in the next three decades. Offshore wind's slow start in the United States has much to do with a climate of regulatory uncertainty and the slow pace of federal permitting — the domain of the Interior Department's Bureau of Ocean Energy Management (BOEM). But there are signs that's changing, too.

"This year I think we will break the logjam on project approvals," says Jeremy Firestone, the director of the Center for Research in Wind at the University of Delaware. "We might consider that to be the beginning of pretty large and steep buildup."

Still, it's not all smooth sailing ahead.

In federal waters along the Atlantic coast there are already 15 active leases for offshore wind projects. Developers for 10 of those that have submitted their construction and operations plans for the federal environmental review and permitting process.

But the fate of the project that had been at the front of the line — Vineyard Wind — could influence the rest.

The 800-megawatt project of Copenhagen Infrastructure Partners and Avangrid Renewables was set to be the first utility-scale wind development in federal waters. If approved, it would be built 15 miles south of Martha's Vineyard and could generate enough electricity to power 400,000 homes.

Vineyard Wind initially expected a federal permitting decision from BOEM in August 2019. But Interior Secretary David Bernhardt unexpectedly announced his agency would instead require a supplemental study to examine the cumulative impacts of all the other offshore wind projects planned in Northeast and mid-Atlantic waters.

The move came after the commercial fishing industry raised concerns that the turbines would interfere with its operations.

The decision also sparked worry among some that it was an intentional delay from President Trump, who's been outspoken about his dislike of wind energy, even falsely claiming that turbines cause cancer.

"I think it's important to look closely at projects — and at suites of projects — but that process would have been easier to take if it had been a little bit more predictable and if there was less suspicion that some things were be done just to throw monkey wrenches in the progress of particular projects," says Rogers.

That supplement to the Draft Environmental Impact Statement was published in June 2020, with the final EIS expected this past December. But then the decision was delayed again. This time until January 15 — just five days before Trump leaves office.

In response, Vineyard Wind added its own speed bump to the process.

The developers announced at the start of December that they wanted to hit pause and were temporarily withdrawing the construction and operations plan so they could update their project with the most recent technology. Replacing the planned 12-megawatt GE Haliade-X wind turbine with a new 13-megawatt turbine would enable the project to trim its 84 turbines to 62, while still producing the same amount of power.

Despite the benefits of a smaller price tag and footprint, experts speculated that the decision was a political calculation and Vineyard Wind wanted to push off a decision on its project until the Biden administration took the helm.

But Trump's Interior Department responded by declaring that the Vineyard Wind application was being terminated and its developers would need to restart the application process for a federal permit.

What that means to the timeline of the project, and the other developments waiting in the permitting line behind it, is unclear. Years of scientific inquiry and project planning have already been completed, so in theory, restarting the process wouldn't be starting from square one.

"BOEM already knows a lot and they will still know a lot come Jan. 21," says Rogers. "One could imagine that they should remember what they know and, assuming that the science is solid, they could proceed quickly."

If Vineyard Wind does get its eventual go-ahead from BOEM, the hope is that the completed cumulative environmental impact statement could help speed up the process for other projects in the pipeline.

"And that will give some needed confidence to the industry and their investors that these projects are going to move forward," says Firestone.

It's also likely that another project will leapfrog Vineyard Wind. A 132-megawatt project in New York by Ørsted and Eversource Energy is now next in the queue.

The federal approval process is paramount, but we wouldn't be standing on this precipice without a few other factors, too. One of the biggest is the push from state governments to mandate offshore wind procurement in the mix of clean energy solutions being employed.

States from North Carolina to Maine have used the legislative or regulatory process to call for upwards of 30 gigawatts of offshore wind by 2035. Rogers predicts that offshore wind along the eastern seaboard "is going to be the dominant piece of the expected power mix as we look to fully decarbonize."

Virginia, which is looking to procure 5,200 megawatts by 2034, is already off to the races. In 2020 Dominion Energy built a two-turbine pilot project off the state's coast. Following successful reliability testing, the company has just submitted plans for its full 2,640-megawatt project — the largest thus far in the pipeline.

And while East coast states are leading the charge, there's offshore wind potential in other coastal waters, too.

The Gulf Coast, now home to the oil and gas industry, is readying for wind development. In November, Louisiana Gov. John Bel Edwards called on BOEM to start a task force to coordinate leasing in federal waters in the Gulf.

On the West Coast, California is studying where offshore wind power could best be sited. Because of the depth of the waters, wind developments will likely be floating arrays — a technology that's been used in Europe and soon in Maine.

Even lakes are in play. In the Midwest, Icebreaker Wind is nearing approval for a plan to construct North America's first freshwater offshore wind development on Lake Erie.

Like the rest of the clean energy industry, offshore wind has seen technology growing by leaps and costs falling. The most noticeable difference is the size of turbines, which have gotten bigger and more efficient.

These advances mean that fewer structures need to be constructed in the ocean to generate the same amount of power and they can be farther apart. A decade ago, the thinking was that turbines need to be spaced about 0.6 nautical miles apart. Now the industry says it can make do at 1 nautical mile — which creates a bigger pathway for fishing boats, search and rescue, and other marine vessels.

How the proliferation of wind development along the Atlantic coast will affect wildlife — particularly marine mammals, like endangered North Atlantic right whales, and birds — is still being studied and best practices developed.

From a climate change perspective, the impending build out of offshore wind energy is good, says Shilo Felton, the field manager of Audubon's Clean Energy Initiative. But there are potential harms to birds that include collisions with turbines, or the development displacing birds from foraging or roosting sites, or migratory pathways.

"We don't really know to what degree the species that we have off the coast of the United States will experience these effects," she says. "It could be very minimal, but we still want to know."

The threats to marine mammals are greatest during construction, and some animals could be bothered by noise from the turbines after they're operational, but experts say there are existing and emerging technologies that could help to avoid or minimize the impact.

"We believe that offshore wind can absolutely be developed in an environmentally responsible manner," says Francine Kershaw, staff scientist at NRDC. "But it requires a collaborative effort between developers, agencies and other stakeholders."

As 2020 came to a close, the wind industry scored wins with the end-of-the-year COVID relief and government spending bill, including a five-year extension for offshore wind tax credits. And with the Biden-Harris administration soon taking up the reins, the political landscape for offshore wind development looks more certain.

"We'll shortly leave behind an administration that has been at best ambiguous and at worst downright hostile to clean energy and maybe especially offshore wind," says Rogers. "And there's no question that the incoming [Biden] administration will be a whole new ballgame when it comes to the importance of addressing climate change, cleaning up the power sector and embracing clean energy."

As the administration looks to tackle climate change and shore up an economy struggling with the pandemic, offshore wind could boost both, its backers say. The offshore wind industry could add 83,000 the U.S. economy in the next 10 years, according to the American Clean Power Association.

"Continued efforts by the states to build out offshore wind supply chains, port infrastructure and local workforces will be key as the industry develops," says Laura Morton, senior director of policy and regulatory affairs for the group.

The industry and environmental organizations have their own wishlists from the administration, but University of Delaware's Firestone says one helpful immediate change would be a budget increase for BOEM.

"It needs to staff up greatly to handle the 30 gigawatts of presently planned offshore wind," he says. "They need a lot more people in order to review those plans if the projects are to be built in a timely fashion."

Rogers is optimistic that the new administration, and the years of work that have come before, could result in a breakout year for the industry.