With U.S. on edge and Trump still in power, state capitals on guard against far-right "shock troops"

"The Capitol siege has provided far-right extremists with significant momentum," warned one expert 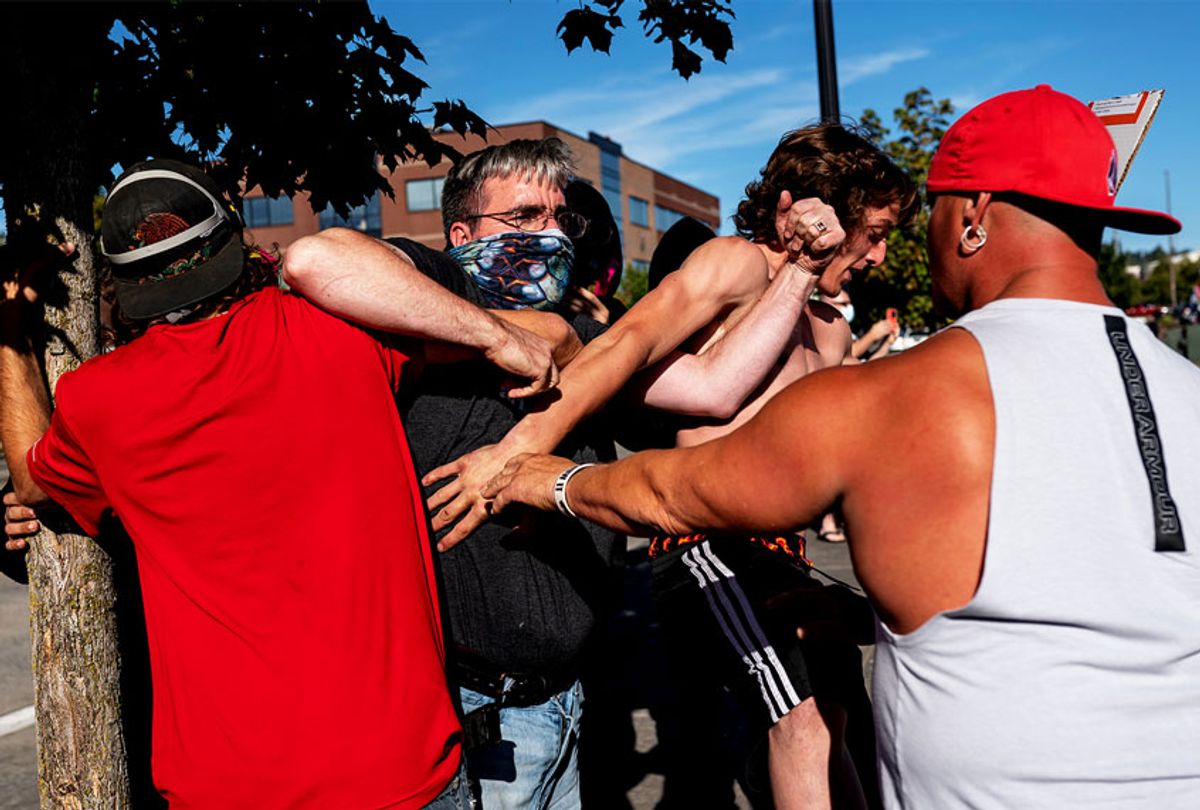 A black Lives Matter protester scuffles with attendees of a pro-Trump rally during an event held to show support for the president on August 29, 2020 in Clackamas, Oregon. Far left counter-protesters and pro-Trump supporters clashed Saturday afternoon as a parade of cars carrying right wing supporters made their way from nearby Clackamas to Portland. (Nathan Howard/Getty Images)
--

With less than a week until President-elect Joe Biden's inauguration—which will come in the wake of outgoing President Donald Trump's historic second impeachment for inciting an insurrection at the U.S. Capitol—Washington, D.C. and communities across the country are heeding the FBI's recent warning and bracing for more violence.

While, according to Military Times, Army Secretary Ryan McCarthy has authorized up to 21,000 National Guard members from throughout the United States to help provide security for next Wednesday's inauguration, the FBI earlier this week warned that right-wing groups are also planning armed insurrections in state capitals nationwide.

"The biggest threat posed by right-wing extremists is not in Washington, D.C., but in state capitals, according to interviews with more than a dozen current and former law-enforcement officials, local authorities, and domestic-extremism experts," TIMEreported Thursday. "For years, local law enforcement officials have largely failed to keep pace with the growing menace of right-wing violence and are ill-equipped to track the network of extremists operating in their jurisdictions."

"If you have people showing up to state capitals with weapons, even if they don't have the intent of launching an attack, the prospects for confusion or miscommunication are much higher," Colin Clarke, senior research fellow at the Soufan Center, told TIME. "That's what I'm concerned about—Lansing, Michigan, and Harrisburg, Pennsylvania, and Richmond, Virginia, and the Pacific Northwest in the coming days and weeks."

According to The Philadelphia Inquirer:

Officials in Pennsylvania haven't identified specific threats to Harrisburg, but Gov. Tom Wolf is ordering the Capitol to close Tuesday, when three statewide officials are to be sworn in, and Wednesday, Biden's inauguration. The Capitol complex has been generally closed to the public amid the pandemic, and the state Senate said its offices would close Saturday through Wednesday.

The administration activated 450 members of the Pennsylvania National Guard to assist State Police, Capitol Police, and Harrisburg Police in securing government buildings and other potential targets across the commonwealth. Police plan to close streets around the Capitol ahead of any demonstrations, and State Police are providing aviation support in the form of helicopters and drones.

Clarke told the newspaper that securing the U.S. Capitol is essential but he also worries that as it becomes more "hardened" thanks to the flood of National Guard troops pouring into D.C., state capitals will become bigger targets, particularly states such as Pennsylvania and Michigan, with established militias.

At the Wisconsin statehouse in Madison, for example, the lower-floor windows have already been boarded up in preparation for possible violence on Sunday, January 17—a date that has been reported as a focus for some right-wing, pro-Trump elements.

In April 2020—just days after Trump tweeted, "LIBERATE MICHIGAN!"—armed gunmen stormed the statehouse, demanding an end to public health measures related to the coronavirus pandemic, including Gov. Gretchen Whitmer's stay-at-home order. In October, federal and state officials announced terrorism, conspiracy, and weapons charges against 13 men accused of plotting to kidnap Whitmer as well as an attack on the Michigan State Capitol.

The Michigan Capitol Commission on Monday voted unanimously to ban the open carry of guns inside the building, after resisting such a move for years. According to the Detroit Free Press, "Critics say the ban does not go far enough and the commission should ban all firearms inside the Capitol, whether they are carried openly or concealed, by anyone who is not law enforcement."

Other states are also boosting security around government buildings, from California to Georgia to Texas to Washington state, NPR noted Wednesday.

Amnesty International USA wrote in an open letter to U.S. mayors, governors, and state attorneys general on Wednesday that it "is deeply concerned by reports that armed white supremacist groups and individuals are planning further disruption" and urges local and state leaders "to do everything in your power and within human rights standards and obligations to protect people from violence by these armed groups and individuals, and to condemn white supremacy."

In a statement Wednesday afternoon, Trump—who was banned from various online platforms after the deadly siege of the U.S. Capitol—said: "In light of reports of more demonstrations, I urge that there must be NO violence, NO lawbreaking, and NO vandalism of any kind. That is not what I stand for, and it is not what America stands for. I call on ALL Americans to help ease tensions and calm tempers. Thank You."

After the Democrat-controlled U.S. House impeached the president an unprecedented second time later Wednesday—noting that at a rally before the attack, he repeated lies about the November election and urged the crowd to march to the U.S. Capitol—Trump released a video with similar remarks discouraging violence.

However, some experts worry that even if Trump sticks to those talking points in the days ahead and leaves office because Biden is sworn in—rather than being removed via the 25th Amendment or a Senate vote before the inauguration—violence from right-wing groups will continue across the country.

"There's more threats now and the online chatter feels more violent and energized than at any point in the past four years," Clarke told the Inquirer. "The Capitol siege has provided far-right extremists with significant momentum."

As TIME put it:

The forces that converged to cause chaos in D.C. have been building across the country for years, from the "Unite the Right" rally in Charlottesville in 2017 to armed demonstrators who overcame police and stormed the Michigan and Idaho statehouses this summer. While it was Trump's election loss that galvanized them to act on January 6, their far-right, anti-government, white supremacist, and other causes won't end with his time in the White House. Now, newly emboldened by what they view as a successful siege on January 6, they have dispersed back into their communities, preparing for the next round of armed demonstrations, not just timed to President-elect Joe Biden's inauguration but in the future.

Michael German, a retired FBI special agent who is now a fellow with the Liberty & National Security Program at New York University Law School's Brennan Center for Justice, told the outlet that "it has created a real nightmare here."

"Many of the people committing violence at these rallies have been conditioned to believe that law enforcement will allow it to happen," he explained. "They believe they're the shock troops of the United States. Not just organized groups, but a lot of people you have taught that acting violently against their political enemies is okay. It's hard to put that back into the bottle."