Trump is gone. Now we face the real question: Does Biden have what it takes to save us?

Biden's inauguration is low on fun and heavy on grim determination, but that's what a country deep in crisis needs 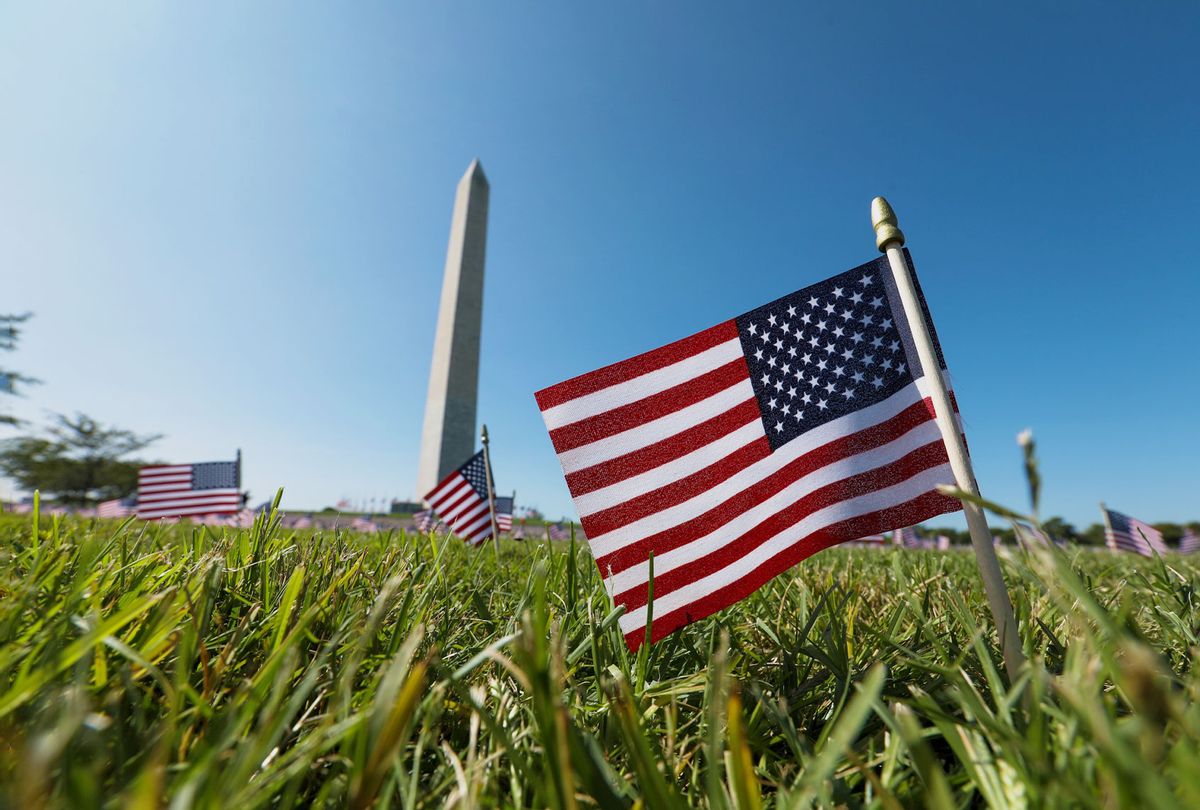 American flags placed on the National Mall by the Covid Memorial Project to represent the 200,000 Americans that have lost their lives due to the coronavirus (COVID-19) pandemic, in Washington, DC, USA on September 22, 2020. (Yasin Ozturk/Anadolu Agency via Getty Images)
--

Even before he was sworn in at noon on Wednesday, Joe Biden stepped into the role of president, filling the vacuum left by Donald Trump, who was too occupied staging his failed coup to bother with many of the basic duties of the job. On the eve of his inauguration, Biden and Kamala Harris held a ceremony at the Lincoln Memorial Reflecting Pool to honor the 400,000 who have died so far from the coronavirus pandemic, in which Biden cautioned that while it's "hard," that to "heal we must remember."

It's the basic sort of presidential leadership that Trump, ever the malignant narcissist, avoided even as the death tally climbed, certain as he often seemed that people were dying just to make him look bad. It was the culmination of Biden's transitional period, where he repeatedly rose to the occasion as Trump failed, showing leadership on important issues.

It was Biden, not Trump, who made an emergency speech denouncing the Capitol riot. (Trump, of course, was busy supporting the insurrection, and largely focused on praising the insurrectionists by saying, "We love you.") It was Biden who took the lead on public communications regarding the latest spike in the pandemic, while Trump's administration not only failed to deliver on promises on vaccines but was caught lying about the state of the nation's vaccine reserve.

Now, in a true pinch-yourself-this-is-real moment, Trump is finally gone and Biden has been sworn in, vowing, "We'll press forward with speed and urgency for we have much to do in this winter of peril and significant possibilities. Much to repair, much to restore, much to heal, much to build, and much to gain."

And the real question for so many who have spent years resisting the tumorous Trump presidency is finally here: Now what?

Despite fears that Biden's speech would paper over recent events, he leaned into the realities of the moment by denouncing the "uncivil war" and the violence that "sought to shake the Capitol's very foundation."

"Yet hear me clearly, disagreement must not lead to disunion," he continued, adding, "To overcome these challenges, to restore the soul and secure the future of America, requires so much more than words and requires the most elusive of all things in a democracy: unity."

The task of getting rid of Trump was so all-consuming that it often distracted from the real mess he left the country in, which is much worse in many ways than what even the worst doom-sayers predicted when Trump won in 2016. There's a pandemic raging across the land, infecting hundreds of thousands every week and killing thousands every day. The economic outlook is dire, especially without a much more robust relief package than the one that was belatedly passed by the Republican-controlled Senate in December. Despite initial hopes that the crisis would be ended soon by a vaccine, the slow rollout has made it clear that things are going to stay terrible for a long time still. We'd be lucky if this situation was over by next fall.

And that's just the immediate and most pressing problems. The damage left in Trump's wake is so immense that it's hard to wrap one's mind around it at times. Trump broke up families and wreaked havoc in the lives of countless people with his anti-LGBTQ and anti-immigration policies. He rolled back environmental regulations, even as the problems of climate change started to manifest in real-time. He broke the U.S.'s standing on the world stage, and it remains unclear that even someone as widely respected as Biden will be able to claw that back.

Then there's the issue of the body politic. The insurrection is just the most dramatic symptom of a larger problem of Republican voters, bitter about their declining numbers, increasingly rejecting democracy and casting for a way to entrench minority rule. Trump didn't cause that problem, but he dramatically accelerated it. Biden comes into office with a large plurality of voters refusing to accept that he is even the legitimate president. Huge numbers of Americans are swimming in increasingly bizarre and racist conspiracy theories to justify this attitude.

Biden won the primary by presenting himself as a "safe" option, the non-Trump centrist white guy who primary voters believed would be less threatening to fairweather voters than someone with a more ambitious platform, such as Sen. Elizabeth Warren of Massachusetts or Sen. Bernie Sanders of Vermont. Biden secured his primary victory right as the seriousness of the pandemic was dawning when voters were hyper-focused on nominating the guy who seemed hardest for Trump to beat. Biden's centrism was a selling point of this loss-aversion style of campaigning.

In the months since, however, the reality has set in that the nation is going to need more — a lot more — than a replacement-level Democrat whose main selling point is that he's not Trump. Our problems are enormous and the person needed to fix them needs to have the guts and ambition to take dramatic action to solve them. Biden himself seems to get this.

"I think it's probably the biggest challenge in modern history, quite frankly. I think it may not dwarf but eclipse what FDR faced," Biden told Chris Cuomo of CNN last April.

Trump's legacy is a grotesque mix of the economic ruin of Herbert Hoover, the racist legacy of Andrew Johnson, and the corrupt legacy of Richard Nixon. His successor needs to be more than a Jimmy Carter figure, someone who is nice enough but too modest and conservative in his goals. Biden needs to be a figure more like, well, FDR — someone with the imagination and courage to tackle what needs to be a massive overhaul of our political system.

No one a year ago would have flagged Biden as the next FDR. And there's still good reason to be concerned that his instincts — he loves to talk about bipartisanship, for instance — are too moderate and compromising, and will lead to Senate Republicans derailing his efforts with phony "talks" where they pretend they're willing to negotiate in order to run out the clock. But there are also promising signs that Biden understands that seriousness of the moment and, as David Roberts at Vox advised in December, is willing to focus on "doing as much good on as many fronts as fast as possible" instead of getting bogged down with the GOP's derailing tactics.

Biden just announced the first in what will hopefully be an all-out blitz of activity from the new administration: Seventeen executive actions aimed at undoing much of the damage Trump has done, as well as starting the immense projects of fighting the pandemic and tackling racial justice issues raised over the last year of protests. The previous four presidents limited themselves to one or none. Biden's team also promises to roll out a series of more over the next ten days, while also introducing major legislation — including a $1.9 trillion coronavirus relief package — to help turn the nation around.

The question is whether he can keep it up, or whether he'll be vulnerable, as he has been in the past, to the usual strategies Republicans use to slow things down.

Certainly, the inauguration itself is a solemn reminder of the enormity of this moment. It's unlikely that Biden, who has had presidential ambitions since at least the 1980s, imagined his inauguration would be this way. He'll attend no inaugural ball, there'll be no massive crowd of well-wishers, just a relatively small and subdued group of masked people sitting six feet apart from each other and surrounded by thousands of National Guard to protect the proceedings from more violent insurrectionists. The Biden inaugural committee has made a dramatic gesture towards the sadness that hangs over the event with not just Tuesday night's memorial but also the sea of flags replacing the usual warm human bodies that would fill the National Mall for this occasion.

This muted celebration and the focus on getting to work is what is needed for our time.

The inauguration of Barack Obama was a joyous occasion, feeling as it did like turning a new page in American history. Twelve years later, we are all bruised and battered and a little wiser, realizing that it will take more than a dashing president and a sense of optimism to fix what's wrong with this country. Today may be a new beginning but of a journey that will be arduous and uncertain, requiring grim determination if there is to be any hope of a better day.