Can Democrats hold the line? Schumer may rebuff McConnell on filibuster in first power-sharing salvo

Schumer: Dems to introduce a new bill to “renew democracy” 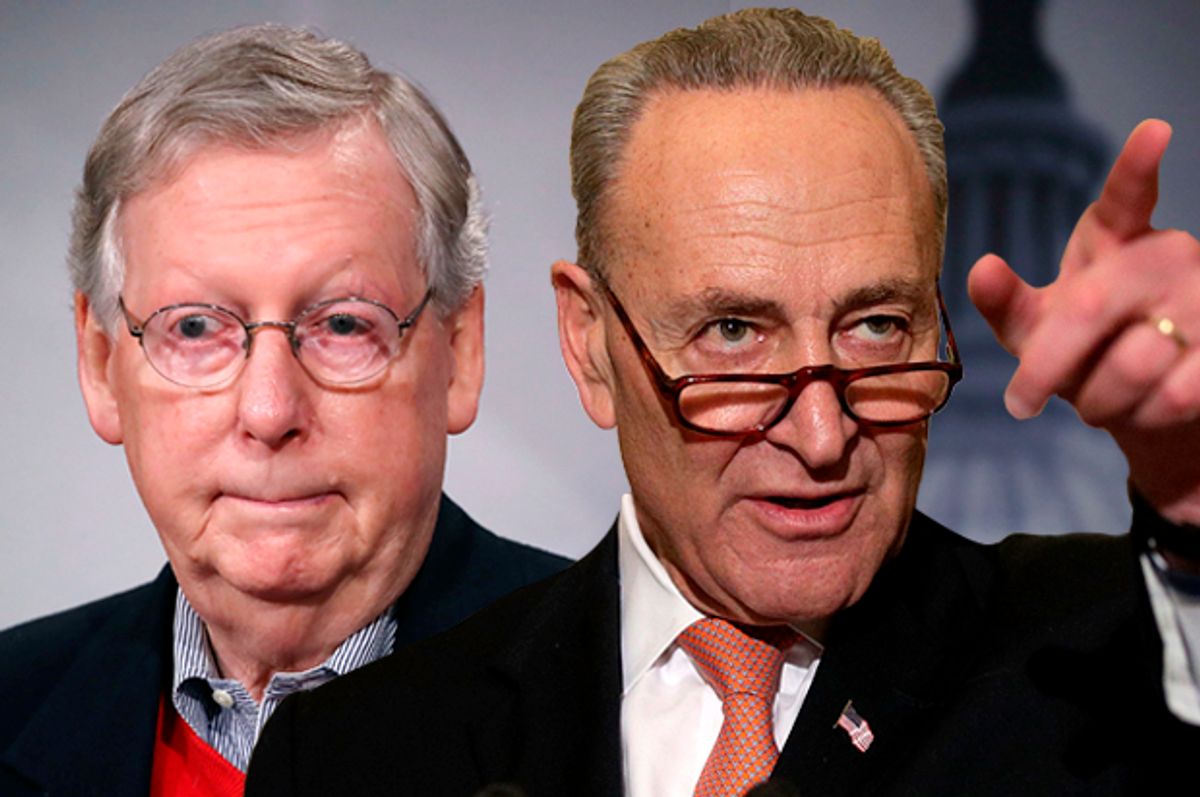 Now that the Democrats have taken their narrow hold on the Senate majority, Republican Majority Leader Mitch McConnell, R-Ky., is pushing to keep the filibuster — a tool that will undoubtedly be used to hobble any Democratic agenda. So far, however, all indications are that Senate Democrats are prepared to explore the "nuclear option" of suspending or even ending the filibuster –– which might expedite Senate Majority Leader Chuck Schumer's top legislative priority.

"From a violent insurrection to countless attempts to suppress votes," Schumer said, "Attacks on democracy have come in many forms." The Senator added, "The first bill the @SenateDems majority will introduce will be the #ForThePeople Act to renew democracy, end big money in politics, and tackle corruption." With support from several civil rights groups and public policy organizations, including the Leadership Conference on Civil and Human Rights, Common Cause, the Center for American Progress, the "For the People Act" seeks to crack down on "rampant voter suppression, gerrymandering, and a torrent of special interest dark money."

The first iteration of the "For The People Act" (H.R. 1) was passed in the House back in 2019 before it was inevitably killed by the Republican-majority Senate. The bill –– which The New York Times called "the Democrats' signature piece of legislation" –– originally set out to expand voting rights, improve government ethics, and enact sweeping campaign finance reform, even demanding a constitutional amendment to reverse Citizens United.

The bill also promised to institute a formal code of ethics for Supreme Court judges, reform redistricting, and give D.C. formal statehood. McConnell condemned it, at the time, as a "one-sided power grab" by the Democratic lawmakers.

Schumer has been open to working across the aisle given the Senate's virtually even split, but his efforts to broker a power-sharing agreement with McConnell look to have run into a wall after McConnell demanded he be able to still utilize the only procedural mechanism that could help maintain his control even while in the Senate minority. "The legislative filibuster is a crucial part of the Senate," he declared on Thursday.

"It's too soon to say how we'll pursue this," said Sen. Ed Markey, D-MA, who sponsored the bill with Schumer, "Every American has received a message that the integrity of our elections is incredibly important and so in terms of accountability for the events of this past year there's probably nothing more important than passing the For the People Act."

The No. 2 Democrat in the Senate, Democratic Whip Dick Durbin of Illinois insisted, "We're not going to give [McConnell] what he wishes. If you did that then there would be just unbridled use of it. I mean nothing holding him back."

"Chuck Schumer is the majority leader and he should be treated like majority leader. We can get shit done around here and we ought to be focused on getting stuff done," said Sen. Jon Tester, D-Mont. "If we don't, the inmates are going to be running this ship.

Even West Virginia Democratic Sen. Joe Manchin, who opposes such institutional changes, said of Schumer's refusal to back down from the filibuster fight: "Chuck is right to do that, he's the leader. I'm in the minority of the caucus on this. He has the right to use that to leverage in whatever he wants to do."

In the meantime, McConnell is also reportedly asking Schumer to hold off an impeachment trial until February to give Donald Trump's legal defense at least two weeks to prepare.