The meaning of "religion" has changed, and the modern-day concept may have nothing to do with the word's origins 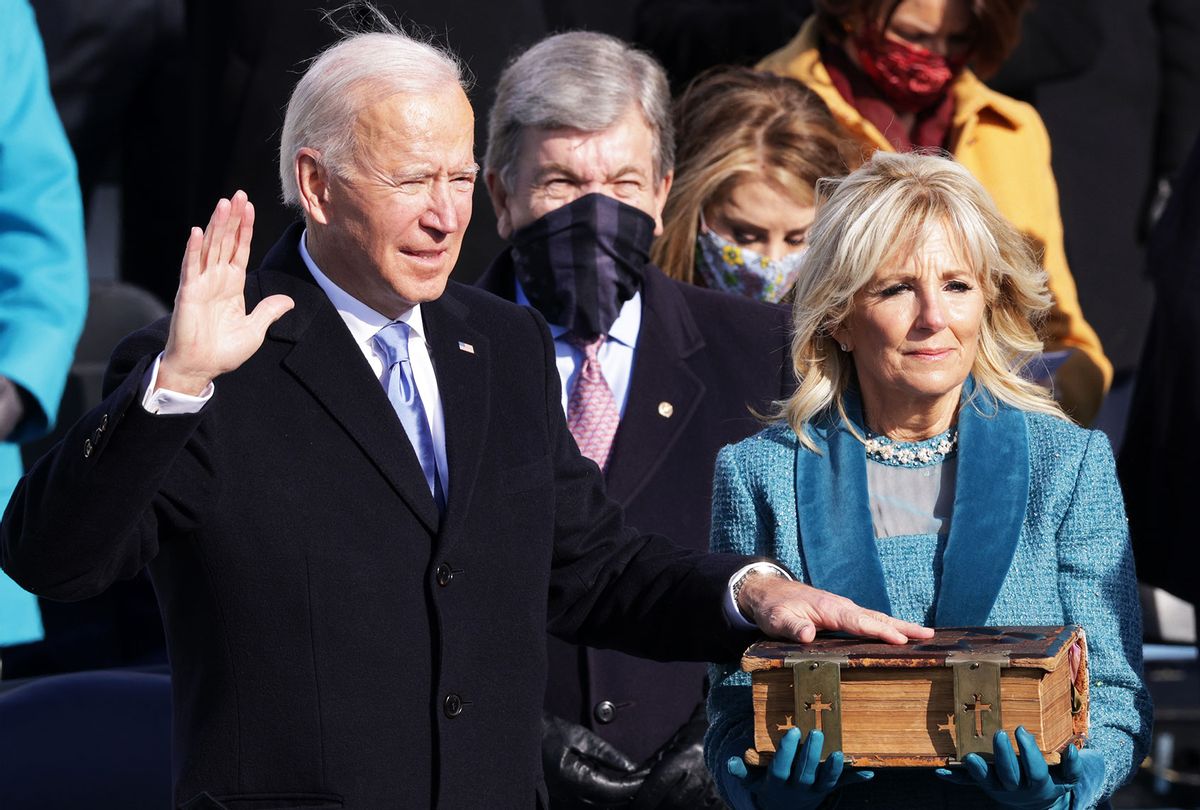 Joe Biden is sworn in as U.S. President during his inauguration on the West Front of the U.S. Capitol on January 20, 2021 in Washington, DC. During today's inauguration ceremony Joe Biden becomes the 46th president of the United States. (Alex Wong/Getty Images)
--

The Bible featured prominently in the inauguration. In fact, three were used in the swearing-in ceremonies – Kamala Harris used both Thurgood Marshall's and one belonging to a friend; Joseph Biden used a 128-year-old family Bible.

About two weeks earlier, on Jan. 6, rioters who stormed the U.S. Capitol also held Bibles as a nod to the apparent religious motivations for their actions. The mob took with them flags saturated with Christian nationalist ideology, such as banners with "Jesus Saves" written on them accompanied by chants that "Christ is king, Trump is president."

These and other religious symbols, used both in the service of the presidential transfer of power and also violent protests, demonstrate how deeply religion can motivate people in society and influence their actions politically.

Yet the way people think about religion these days, often as a set of beliefs, has evolved across time and cultures.

Religion in ancient Near East

As a scholar of the Bible and the ancient Near East, I study the role of religion in history and how this term originated and came to be understood over the centuries.

For most cultures in the ancient world, such as Egypt, Assyria and Babylon, until the second century B.C., there was no word for "religion" as a singular, abstract concept.

While these cultures had rituals and rites for worshiping gods and goddesses, there was not a singular word in these languages that refers to "religion" in the modern sense. For example, the Assyrians had a unique blend of religious devotion to their chief god Assur and a belief in a divine mandate to spread their empire, but they did not have one word to cover all such practices and beliefs.

The same is true for the Old Testament, written in Hebrew and Aramaic from approximately the ninth century B.C. to the second century B.C. There is no word that can really be translated as "religion" in the modern sense in the Old Testament, even if there were religious concepts, such as prayers and acts of piety toward the god of Israel.

The evidence from the ancient Near East and the Old Testament points to a complex set of practices that defy a singular notion of religion, such as a creed of faith or spirituality in distinction from other realms of society such as politics or economics.

A similar complexity appears in the history of early Christianity in how religion functioned, both in terms of rituals and in the use of the Latin term it derives from.

The word "religion" in English originates from the Latin "religio." One of its earliest appearances is in works such as the plays of second-century B.C. writer Plautus.

According to the classicist Niall Slater, the word defies "a theologically rigorous definition" in Plautus. It means something like "awe" in one passage, as well as reserve, in the often ironic sense of characters who find themselves in situations in which they display restraints from certain impulses. For example, in one scene in Plautus' "Asinaria," a woman is bound by a contract from following other male lovers, including gods, a restraint called "religiosa."

By the first century B.C., the word began to be associated with devotion to the divine realm. As seen in the writings of the orator and politician Cicero, one conception of the Latin religio that became frequent in Roman texts was the specific rituals and rites that were a part of worship of the gods and goddesses.

According to the classicist Clifford Ando and scholar of religion Brent Nongbri, for Cicero each ritual could be a religio, and, at the same time, when Romans performed all such rituals they could together be referred to as a "single, Roman, religio."

However, Roman thinkers did not use this term for Christianity in its earliest phases. In the second century A.D., Roman writers such as Pliny, Tacitus and Suetonius labeled Christianity not a religio but rather a superstitio, or a "superstition," a term usually applied to non-Roman, foreign practices.

Eventually Galen, a physician and philosopher who died in A.D. 210 in Rome, would call Christianity a "philosophical school," elevating the status of the movement.

Early Christians who wrote in Latin, beginning with Tertullian in the second century A.D., often used the word religio to refer to their own rituals and rites, though other uses appeared as well, which were inherited from the variety of definitions employed by earlier Latin writers.

The ancient Latin translations of the New Testament, which was originally written in Greek, use religio when rendering passages such as James 1:26-27, which described true religion as care for orphans and widows and keeping oneself unstained from worldly pollution, or sin.

So how did the modern interpretation of religion come about?

If, according to 19th-century German philosopher Ludwig Feuerbach, humans are prone to imagining God in their own image, then according to the scholar of religion Brent Nongbri people are often tempted to do the same with our understanding of the word "religion."

As Nongbri observes, people need to be aware that when they encounter the word "religion" in English translations of ancient sources, it is not the same as spirituality or belief in the sense of an abstract set of convictions.

Often religion is thought of as referring to some inner disposition or abstract belief, such as privately held convictions about salvation separate from politics. The 17th-century thinker John Locke argued this point in his book, "A Letter Concerning Toleration."

Indeed, the inner, spiritual and privatized nature of what many think of as religion is more a reflection of modern Protestant Christian developments and has little to do with the origins of the term.