The FBI, terrorism and the progressive left: This is a job for Kamala Harris

The FBI remains obsessed with progressives, when right-wing violence is the immediate threat. Harris can help 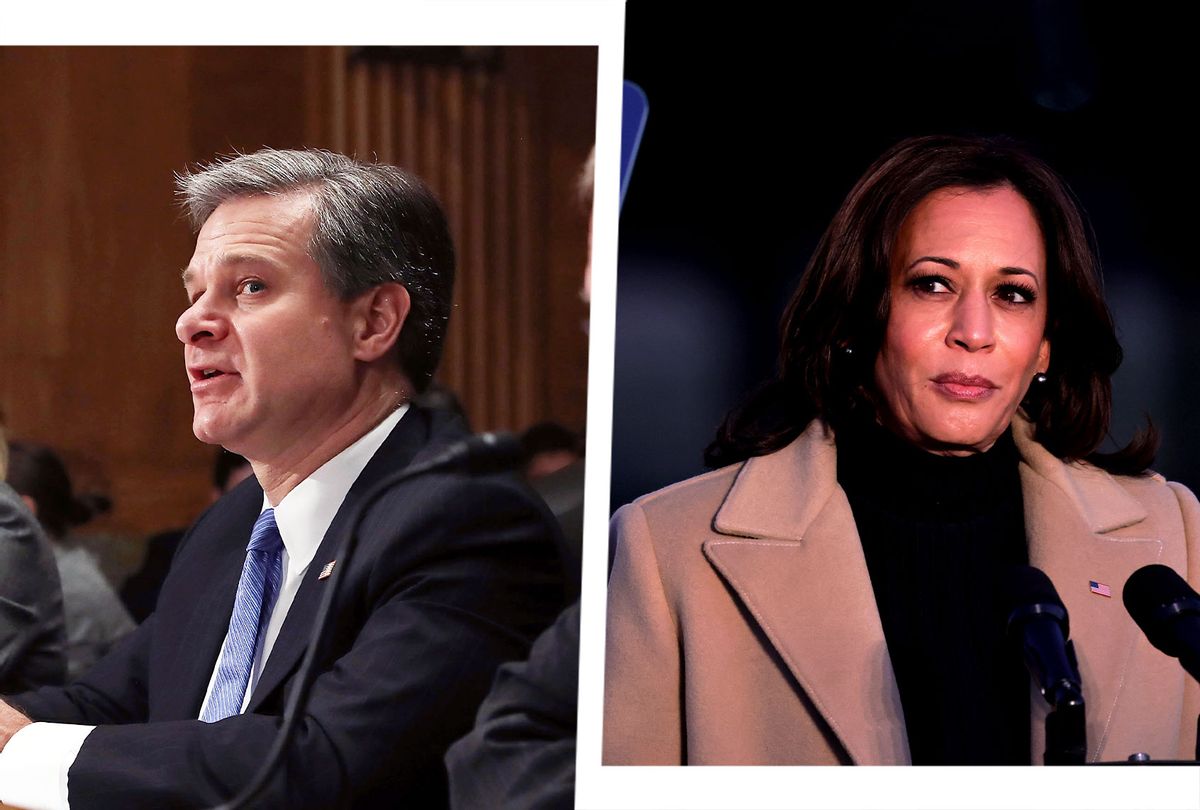 As Joe Biden and Kamala Harris took their oaths of office last week, it was revealed that FBI Deputy Director David Bowdich will be retiring soon. Paul Abbate, the FBI No. 3, will be promoted from associate deputy director to Bowdich's post.

At least for the moment, Joe Biden has left Christopher Wray as FBI chief — partly in deference to the bureau's supposed independence, and also because on the face of it Wray doesn't look like a Trump guy. Both before and after the election, Donald Trump was said many times to be on the verge of firing Wray. But that was only because the FBI director did not yield to the outgoing president's most extreme, extravagant and baseless requests — such as indicting Barack Obama and Biden over absolutely nothing — and doesn't mean Wray should stay on.

Bowdich's early retirement and departure is likely linked to the Capitol events and the perception of FBI inaction toward far-right terrorism, an issue I have raised in more general terms in a previous Salon article. A lapse as grievous as we saw on Jan. 6 is hardly due to incompetence at that level. We are most likely talking about bias.

This is why, as a top priority, Vice President Harris should put her lawyer hat on once again and lead, together with Congress, a reform of the FBI legal standards on terrorism, as they are applied to the progressive left and the far right.

The Capitol attack was not an unpredictable, once-in-a-lifetime "black swan" event. It was part of a pattern. It's not like a meteor hit Washington out of nowhere. These right-wing groups are well known, and closely followed by the FBI.

Ahead of the elections, FBI agents themselves competently and timely foiled the plot by far-right militias to kidnap and assassinate Michigan Gov. Gretchen Whitmer. The FBI agents that did that did not need a publicly organized event that was all over the media and Twitter to tell them what might happen. This indicates that FBI agents and analysts in the field get it right — when the top leadership doesn't put the brakes on them, that is. The people who entered the Capitol had similar plans for any number of politicians and lawmakers. There is evidence appearing now through the courts that the Trump mob indeed intended to capture and assassinate members of Congress, as detailed in a recent court filing by federal prosecutors. The FBI knows these groups and their intentions.

In a press conference several days after the events, FBI officials informed the public that they needed to differentiate between "keyboard bravado" and actual intentions. Keyboard bravado is the new "locker-room talk." The FBI gave terrorism practices and terrorism preparations par excellence the benefit of the doubt, but have a pronounced tendency to crack down on practices which are far away from terrorism when it comes to the progressive left.

The FBI has traditionally been known for its repression of left or progressive activis,, as an Intercept article explores and as a new documentary film about the FBI's treatment of the Rev. Martin Luther King Jr. shows.

In the spring of last year, when I was a candidate for the office of UN special rapporteur on freedom of speech, Bowdich was quoted, in a memo leaked to the New York Times, reacting to the nationwide wave of Black Lives Matters protests. Bowdich maintained that the protesters should be arrested under an outdated racketeering law from the 1940s. The leaked memo showed that Bowdich considered the social justice movement "a national crisis" comparable to 9/11. The hundreds of thousands of people mourning and marching across the country, unified by the simple concept that no life should be taken lightly, were seen by the FBI's deputy director as similar to terrorists or members of organized crime operations.

To say that protesters who clash with the police are like terrorists is like saying that a car crash at the traffic light is a suicide bombing. Recently I wondered why Bowdich won't speak about 9/11 now, when we face the threat of actual far-right terrorism, including plans to blow up buildings and assassinate lawmakers.

The FBI remains obsessed with dissident or radical voices on the left, while largely ignoring the violent extremists and the real terrorism threat on the far right, as recently revealed by an Intercept investigation that found "glaring disparities between law enforcement's depiction of groups on the right and the left."

When it came to analysis of left-wing groups, "law enforcement intelligence was often vague, mixed up in online conspiracy theories or untethered to evidence of suspected criminal activity". When it comes to the right, on the other hand, the documents showed "law enforcement agencies across the country sharing detailed and specific information on the mobilization of armed groups looking to use the unrest as cover to attack law enforcement and protesters and set off a civil war."

Harris, together with Congress, should lead a review and reform of the legal standards the FBI uses in opening terrorism investigations on progressives, Black activists, pro-bono lawyers, intellectuals and left-wing journalists, and review the standards for evidence of what constitutes suspicious criminal behavior, the thresholds for warrants, and other legal procedures. How easy is it to open terrorism investigations on progressives or leftists who have no prior criminal record and no suspicious criminal-group memberships?

It is past time to get to the bottom of this. As recent events should make clear, the progressive left is not the national security enemy.