"We’ve never seen a threat to democracy like this" 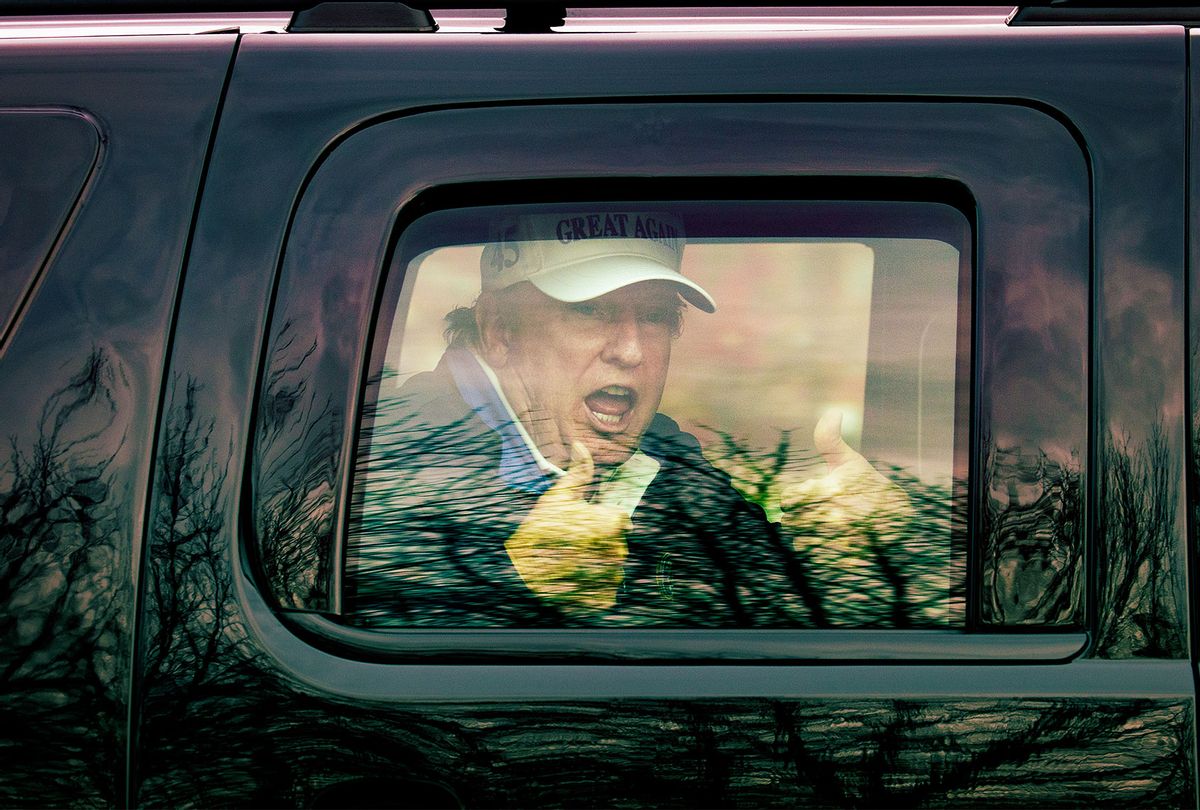 U.S. President Donald Trump gives thumbs up to supporters from this motorcade after he golfed at Trump National Golf Club on November 22, 2020 in Sterling, Virginia. The previous day President Donald Trump left the G20 summit virtual event “Pandemic Preparedness” to visit one of his golf clubs as the virus has now killed more than 250,000 Americans. (Tasos Katopodis/Getty Images)
--

Erwin Chemerinsky watched the emotional debate in the House of Representatives impeachment proceedings yesterday with an eye to the past and the future. At stake was whether our Constitution, the foundational document of our democracy, would survive. While most of his scholarly work concerns constitutional law, the University of California, Berkeley, Law School dean has also helped shape many public and private institutions.

As a USC law professor and later dean of the University of California, Irvine, Law School, Chemerinsky was a regular contributor to the Los Angeles Times editorial pages and served on the board of directors of the American Civil Liberties Union of Southern California.

Shortly after Donald Trump was elected president, Chemerinsky, attorney and author Zephyr Teachout and Harvard professor Laurence Tribe joined together to sue the president for violating the emoluments clause of the United States Constitution.

Chemerinsky talked to Capital & Main on January 13, minutes after the House of Representatives impeached President Trump for the second time, just seven days before his term ends.

Erwin Chemerinsky: It is a constitutional crisis. I think it is the most serious threat American democracy has faced. We came very close to having an election subverted, and that would really have been the end of democracy as we know it.

The Fourteenth Amendment was ratified in 1868, soon after the end of the Civil War. Section three says that anyone who holds a position in government who engaged in insurrection is disqualified from holding future office. This obviously was meant to deal with those who fought for the rebels during the Civil War. I don't think anyone imagined that someday it would be the president of the United States who had incited insurrection.

The language of the congressional articles of impeachment says that Trump is being impeached because "in context" his statements were a clear incitement to invade the Capitol. Is it clear to you that what he said and did was a violation of the Constitution?

I think that Donald Trump did incite insurrection as the articles of impeachment say. Obviously, incitement has to be taken in the context of the words and the actions. Donald Trump 20times at that rally said to the audience "the need to fight." Standing next to him, Rudy Giuliani said there needs to be "trial by combat." And this followed Nov. 3 and President Trump doing everything he could to subvert the results of the election. So it's understandable that Congress would perceive this as inciting insurrection.

There has been a lot of talk about barring Trump from office in the future. What would have to happen for that to take place?

I think the articles of impeachment were written to trigger section three of the Fourteenth Amendment. Section three, of course, says that anybody who holds government office who incites or participates in insurrection, they are barred from future office. I imagine when it would come up is if President Trump would decide to run again then states would have to decide whether to allow him on the ballot or allow him to participate in their caucuses in light of section three of the Fourteenth Amendment.

You wrote recently for the Los Angeles Times that the House of Representatives should not rush towards impeachment. Trump's allies are also saying the process is rushed. Can you explain your position on this issue?

Always before, impeachments have gone through a process with a committee holding hearings, then making recommendations to the entire body. Today the House of Representatives decided not to follow that procedure. I worry about deviating from that in terms of future precedent. Also, I wasn't sure what the hurry was to do this because the Senate is not going to take it up before Jan. 20. The Senate's in recess until Jan.19. In light of that I would have rather that the usual procedure be followed. Let me be clear. I support the impeachment of Donald Trump. I believe he committed high crimes and misdemeanors. I was speaking to the procedural question.

However, Republicans have had no hesitation to use raw political power regardless of circumstances to–for instance–deny Merrick Garland a hearing in the Senate for Supreme Court appointment and to rush through Amy Coney Barrett's confirmation. Yet Democrats are counseled to be cautious while Republicans have no qualms about using the power available to them.

I am not counseling the Democrats to be cautious as I support impeachment. I support impeachment because it is important that Congress send a message. After all, we are speaking on Jan. 13, and there are just seven days left of the Trump presidency. Impeachment isn't about removing him from office. Impeachment is about sending a message. I don't believe that the message is any less if it comes next week or two weeks from now than if it comes today. And I very much criticized how the Republicans manipulated the process to keep Merrick Garland from getting a hearing and in rushing Amy Coney Barrett through. But I don't think that that should justify the Democrats then ignoring the process.

What do you make of Trump's calls to election officials in Georgia, pressuring them to find fraud or to find votes that would overturn the results there?

There is no First Amendment issue with Twitter permanently barring Trump or Facebook excluding Trump for a period of time. The First Amendment applies only to limit what the government can do. The First Amendment doesn't limit what private entities like Facebook and Twitter could do. So, what they did was completely constitutional and legal. From a free speech perspective apart from the Constitution, I'm troubled by a lifetime ban. I think Twitter should certainly take down anything that's incitement – take down anything that's an invasion of privacy. But whether a lifetime ban is appropriate is to me a very different question.

The Constitution was written in 1787 for an agrarian slave society. I think it would be desirable to write a new Constitution, but at this moment in time, when our society is so deeply polarized, I don't think it makes sense. I think there is no way we're going to come to consensus on issues right now. So, for now I think the best we can hope for is to be under this Constitution and to preserve democracy under it.

These impeachments–whether of Andrew Johnson in 1868 or Bill Clinton in 1998–seem to come partly as a result of the deep divisions in society. Is that fair to say?

Robert O. Paxton, emeritus professor of social science at Columbia and one of the foremost historians of fascism, wrote in Newsweek this week that in the past he had hesitated to describe Trump as a fascist. He now writes that Trump's recent actions remove his objection to the fascist label and that the "label now seems not just acceptable but necessary." What is your sense of that word and whether we should be worried about those political tendencies here?

Donald Trump tried to subvert the democratic process. He lost the popular vote by 7 million votes. He clearly lost the Electoral College. He did everything he could to try to stay in power notwithstanding the results of the election. We've seen that Donald Trump has very many authoritarian impulses, and we've never seen a threat to democracy like this. So, I think it's completely appropriate to call him authoritarian, or even fascist.

We have Merrick Garland nominated for attorney general. What are the issues he is going to have to focus on to revive the Justice Department?

Merrick Garland has to restore respect for the Department of Justice and morale within the Department of Justice. It has been terribly damaged by the most recent attorney general, William Barr. I think that there are areas of the Justice Department that have just been decimated under the Trump presidency. The civil rights division – the part that focuses on investigating police misconduct, the part that focuses on voting rights. Also, the part that deals with environmental protection. A lot of terrific career lawyers have left. He needs to restaff those divisions and he needs to reinvigorate them. But I don't think that President Biden could have picked anybody better for this than Judge Garland.

Finally, where is this impeachment going to end up? What happens moving forward?

Whenever there is an impeachment by the House, there is a trial in the Senate. Only if two-thirds of the senators vote to convict is the person removed from office. Of course, Donald Trump will no longer be in office. Current Majority Leader Mitch McConnell has said there is going to be no rush to hold the Senate proceedings. I expect that at some point down the road there is going to be Senate proceedings. In light of the House vote, I expect there will be some Republicans that will vote to convict but I don't expect that there will be two-thirds. I don't know what will mean because Trump will have already left office.