Blind spot: The eye doctor, the U.S. senator and one of Trump's last-minute intercessions

Trump commuted the sentence of a Medicare fraudster who lavished gifts for years on New Jersey Sen. Bob Menendez 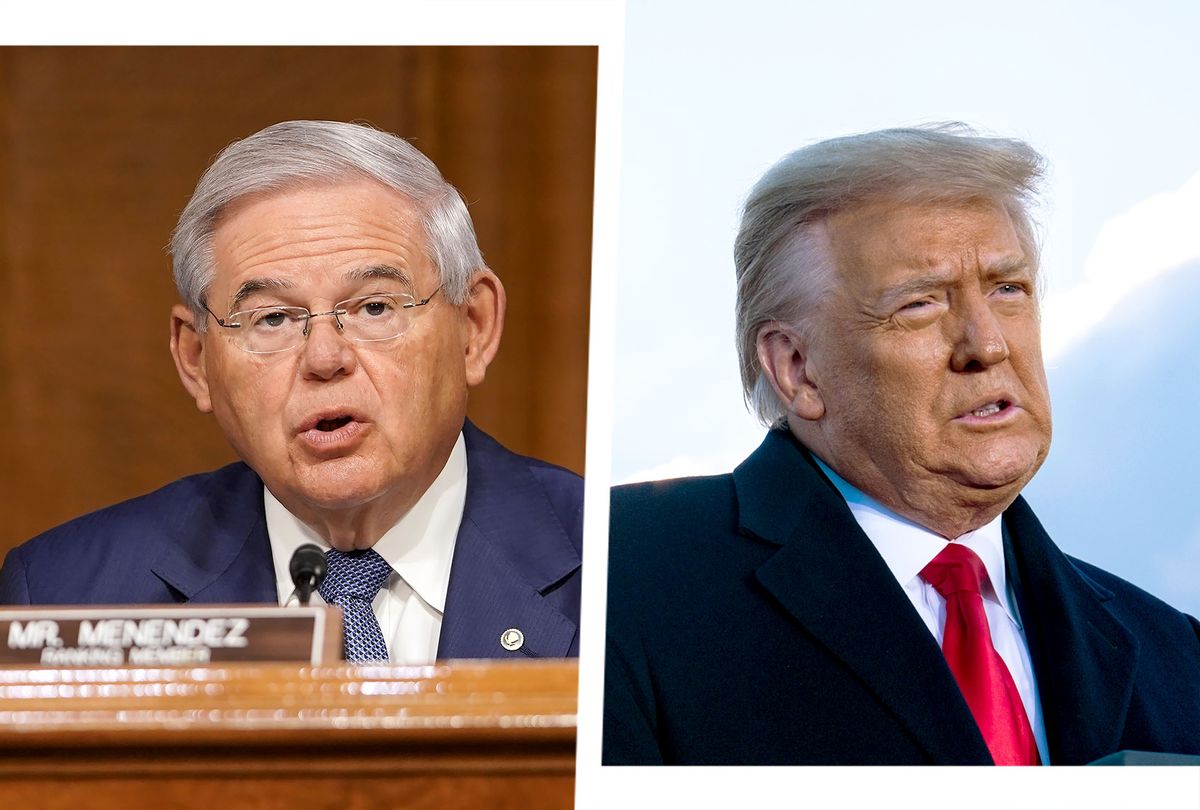 As in any household where an abusive patriarch intoxicated by his power has exited the scene after beating up his family, we are all breathing a collective sigh of relief.

The civil servants, mostly people of color, have cleaned up the excrement and graffiti in the marble hallways of the Capitol — built by their slave ancestors — that was left behind by Trump's army of neo-Confederates, who killed a police officer in the name of their uncivil war.

It's tempting to focus on the reassuring avuncular presence of President Joe Biden, who is working overtime to restore that sense of basic decency that's been lacking for so long.

Like the family that's returned from vacation to find a ransacked home, we have yet to compose an accurate inventory of what was stolen. Are the crooks still in the basement? Are the pets still alive? Is great-grandma's wedding ring where Mom left it?

We were so distracted by the violent frontal assault on our Capitol by Trump's minions that we have failed to properly account for his "out the door" crime wave, committed in the final hours of his presidency with his pardons of 70 people and commutations of prison sentences for another 73.

Trump and his posse have fled for the swamps of Florida, but we need to put the bloodhounds on the scent given off by the stench of so many of these pardons. We need the names of the facilitating law firms and lawyers, cross-referenced with their corporate clients, so there can be a proper accounting.

No doubt, some on the list were meritorious, cases of righting true miscarriages of justice through executive action. But as we might expect, health care fraudsters with New Jersey connections made Trump's rogue's-gallery roll call. When our elected politicians wonder aloud how to account for our stark race-based health and wealth inequalities revealed by COVID-19, they should read some of these people's rap sheets to get a clue.

One of those who benefited from a Trump commutation was Dr. Salomon Melgen, a Florida ophthalmologist, who was a major campaign donor to Sen. Bob Menendez, D-N.J., and got a 17-year federal sentence for his conviction in a $73 million Medicare fraud case. Now, thanks to support from Menendez and dozens of others, he gets 13 years shaved off his sentence.

In 2015, Menendez was indicted on federal corruption charges. The Justice Department alleged that between 2006 and 2013, he had taken close to $1 million worth of "lavish gifts and campaign contributions from Melgen in exchange for using the power of his Senate office to influence the outcome of ongoing contractual and Medicare billing disputes worth tens of millions of dollars to Melgen and to support the visa applications of several of Melgen's girlfriends."

In 2017, a hung jury resulted in a mistrial and prosecutors opted to not retry the case. Menendez pitched that as a kind of exoneration and cast himself as a victim.

"I want to thank the jury, 12 New Jerseyans who saw through the government's false claims and used their Jersey common sense to reject it," Menendez told reporters, Politico reported.

Throughout his Melgen tribulations the leadership of New Jersey's Democratic establishment rallied around Menendez with the same partisan blindness displayed by House Minority Leader Kevin McCarthy toward Donald Trump.

Yet what the jury could not see, his Senate colleagues did. In April of 2018, Menendez was "severely admonished" by the bipartisan U.S. Senate Select Committee on Ethics for, over a six-year period, taking and not disclosing "gifts of significant value from Dr. Melgen" while at the same time using his position "as a member of the Senate to advance Dr. Melgen's personal and business interests."

Lost in all this was Melgen's offenses, which were awful. These were not white-collar victimless violations. There was real flesh and blood to these crimes.

All too often when we see a headline like "$73 million Medicare fraud," our jaundiced eyes glaze over. Here in the Soprano state, that could be a couple of municipal bond offerings or the proceeds from a few Big Pharma insider stock tips.

But Melgen, one of the nation's most prolific Medicare billers in his day, was so much more industrious and disciplined in his efforts that they merit closer examination and appreciation.

Melgen specialized in treating macular degeneration, the major cause of vision loss for people 50 or over. According to Judge Kenneth Marra, who presided over Melgen's sentencing, his practice "was conducted in a manner where he routinely, and as a matter of standard practice, diagnosed patients with medical conditions they did not have in order to allow him to bill for diagnostic procedures and medical services that were not medically necessary or justified."

Judge Marra continued. "Specifically, the Court finds that Defendant routinely falsely diagnosed patients with either wet or dry Age-Related Macular Degeneration. This mis-diagnosis allowed Defendant routinely and as a matter of standard practice to subject his patients to medically unjustified procedures and treatment, and then fraudulently bill for those procedures."

But that wasn't all.

Melgen was also tagged by federal regulators for using single vials of Lucentis, a drug that is injected in the eye to slow the loss of eyesight related to diabetes, to treat three patients, although an individual vial is prescribed to be used only a single patient. Not only did this scam net Melgen a huge windfall but, according to the Centers for Disease Control drug guidelines, put his own patients at risk of infection.

The Palm Beach Post quoted Dr. Robert Bergen, a retired New Jersey retinal specialist who reviewed for prosecutors the charts of more than 300 of Melgen's patients. He said that Melgen was notorious in the world of specialty eye medicine. "Everybody knew about this guy," Bergen told the paper after he testified that Melgen's treatment of his patients was "totally disgraceful."

"It's the most egregious example of totally taking advantage of patients, not caring about diagnosing them properly, it was the antithesis of what a decent physician should do," said Bergen.

As federal health regulators were zeroing in on Melgen, Menendez appealed for intervention with his Senate colleagues and the Secretary of Health and Human Services for a reinterpretation of the regulations under which the government was pursuing Melgen.

It was Palm Beach Post columnist Frank Cerabino who seemed to see the scale of the miscarriage of justice here most clearly. "It wasn't just the tens of millions of dollars that Melgen had bilked from taxpayers," wrote Cerabino. "That was bad enough. But not the heart of it."

He continued: "There was an element of unnecessary physical pain for those unsuspecting patients who had to endure Melgen's self-enriching, medically dubious eye treatments, which included eye injections and retinal laser blasts."

Cerabino went on to point out that Melgen's treatments were described at trial by expert witnesses as "elder abuse," "unconscionable" and "horrifying."

"That's the guy who needs to be set free?" he asked rhetorically. "The guy who found a way to get rich by mistreating old people's eyes?"

Evidently the suffering of Melgen's army of unsuspecting elderly patients was of no consequence for Menendez, who according to his statement after Trump commuted Melgen's sentence was still willing to use his influence on a major donor's behalf.

"Months ago, I was asked if I could offer insight about an old friend, and I did, along with what I understand were more than 100 individuals and organizations, including his former patients and local Hispanic groups familiar with Sal's leadership and philanthropy in the South Florida community," Menendez said in a statement.