Despite attempts at equity, white Americans are being vaccinated at higher rate than Blacks, Latinos 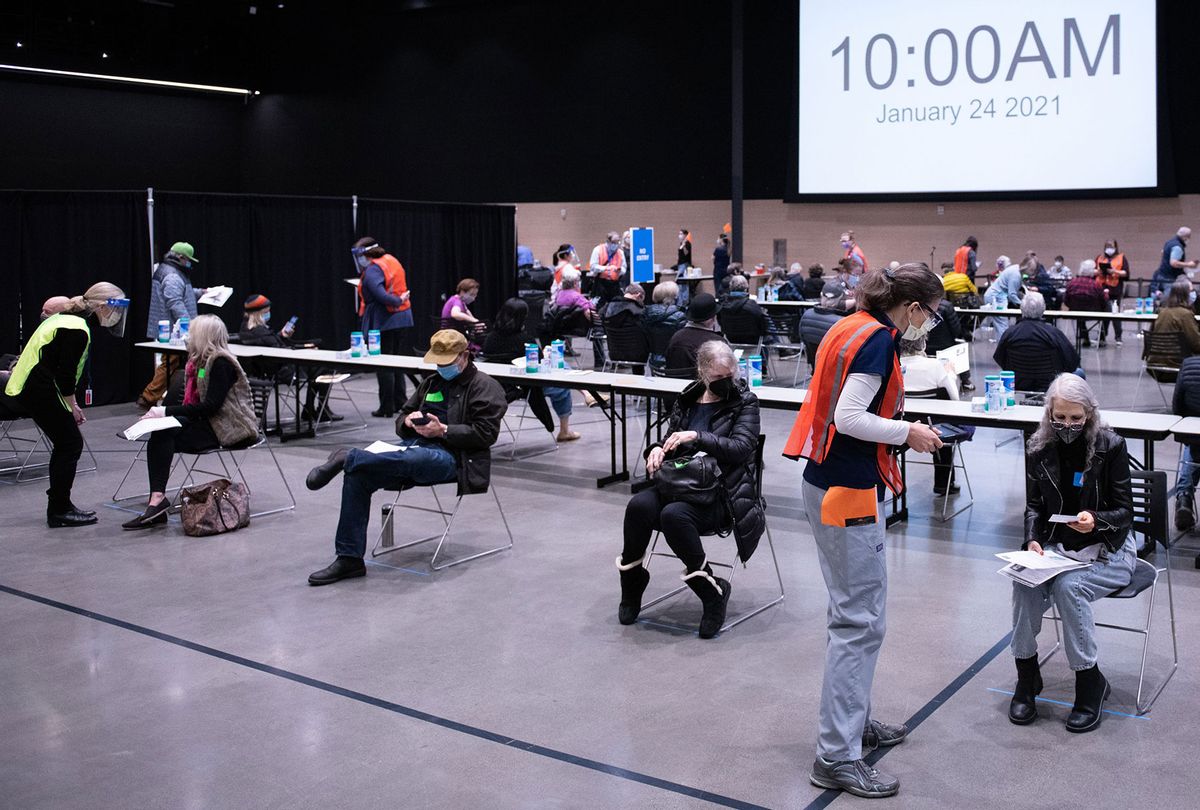 Patients wait and are observed for an adverse reactions following their first dose of the Covid-19 vaccine at the Amazon Meeting Center in downtown Seattle, Washington on January 24, 2021. - Amazon is partnering with Virginia Mason for a one-day pop-up clinic on January 24. 2021 that aims to vaccinate 2,000 people at the companys Meeting Center near downtown Seattle. Virginia Mason is handling vaccine administration, while Amazon is providing the location and help with logistics. (GRANT HINDSLEY/AFP via Getty Images)
--

Since the start of the coronavirus vaccine roll-out, political and health care leaders have been laser-focused on the concept of equity in vaccine distribution. The "phased" rollout that states adopted, in which medical workers, seniors and those at higher risk were vaccinated first, was planned to ensure equitable distribution.

Yet those efforts appear to have been insufficient, as a disconcerting trend has emerged in the racial makeup of the vaccinated. Current reports show that white Americans are getting vaccinated at a higher proportional rate than Black and Latino Americans.

The news is especially troubling given that Black and Latino Americans are dying of COVID-19 at three times the rate of white Americans, according to a Centers for Disease Control and Prevention (CDC) analysis. The discrepancy in people who are dying of COVID-19 and who is receiving the vaccine, which is limited in supply, is raising questions around ethics — and ways in which the gap can be bridged immediately to save lives.

"What's happening now is unethical," said Dr. William Parker, an assistant professor of medicine at the University of Chicago.

According to a CNN analysis published this week, white Americans in Pennsylvania are being vaccinated at four times the rate of Black Americans. Pennsylvania is one of 14 states in the analysis in which vaccine coverage is twice as high among white people on average than it is among Black and Latino people. In Illinois, The Chicago Sun-Times reported that Black Chicagoans account for 15 percent of the more than 100,000 vaccinations administered so far. City officials said 17 percent were Latino, and 14 percent were Asian. Parker analyzed data highlighting how communities with the most deaths in Chicago have the fewest people vaccinated.

The first phase of vaccinations went largely to health care workers in Chicago, but like many parts of the country, the city is gearing up to enter the next round which will offer shots to those 65 or older and to many essential workers. Chicago Mayor Lori Lightfoot is pushing for more outreach in South and West side communities, which have been hit the hardest and are predominantly diverse.

Parker suggested that communities across the country can stop racial disparities from growing by implementing two strategies: first, allocating more vaccines to the zip codes that have been hit the hardest.

"Send the firefighters to where the fire is, direct vaccine to areas where the virus is raging and communities that have been hit the hardest," Parker said, adding that even if rates have plateaued in communities of color, they haven't reached herd immunity and the virus could rage again. "And then, within an area that's diverse, use a lottery, not a first-come, first-serve system."

Indeed, there have been multiple reports of vaccine sign-up websites crashing, forcing people to refresh and be in virtual waiting rooms for hours. A lottery, he said, could be a good starting point to reach people in the community who might, say, not have access to a computer or have the time to wait hours in front of their computer to sign up because they're an essential worker.

"If you think about it, it's harder for these healthcare systems to do it the way they're doing it now, they have to create a website, yet these health systems have all these patient medical record numbers and a pretty good sample of the local community," he said. "It's almost like they're deliberately designing it to prioritize their well-insured and rich friends and patients."

"Maybe that's going a little bit too far," Parker reflected, though he reiterated that the way states and cities are approaching vaccination plans "doesn't make any sense."

The CDC created its guidelines on vaccination priority first based on recommendations made by medical and public health experts on a panel called the Advisory Committee on Immunization Practices (ACIP). The recommendations had three goals in mind: decrease death and serious disease, preserve the functions of society, and reduce the burden COVID-19 is having on people already facing disparities.

In phase 1a, the CDC recommended that healthcare personnel and residents of long-term care facilities receive the vaccine first. In Phase 1b, essential workers such as fire fighters, police officers, corrections officers, food and agricultural workers, United States Postal Service workers, manufacturing workers, grocery store workers, public transit workers, teachers, daycare workers and support staff should be inoculated— in addition to people aged 75 years and older. Supply in many states hasn't allowed for the state to vaccinate everyone in these occupations at the same time.

In Phase 1c, CDC recommends vaccinating people between 65 and 74 years old, anyone over the age of 16 with an underlying condition, and then essential workers who are in transportation, logistics, food service, housing construction, finance, information technology, communications, energy, law, media, public safety, and public health fields.

But states and counties are the ultimate deciders. In Oregon, Democratic Governor Kate Brown is vaccinating teachers before other groups of non-medical frontline workers, including the elderly and people with pre-existing health conditions. The move has been criticized, but Brown and her team believe it is a more equitable decision.

"There are also equity-centered reasons to prioritize vaccinating teachers, educators, and child care providers," Charles Boyle, a spokesperson in the governor's office, told Oregon Public Broadcasting. "Working parents from low-income families are particularly burdened when school buildings are closed by the need to find safe and reliable child care for students learning from home."

In the state of California, the phases were initially tiered by job type. But a recent change at the state level has the distribution plan based mostly on age for later tiers. The plan could move up older adults and push back younger essential workers. Govind Persad, an assistant professor at the University of Denver Sturm College of Law, whose research focuses on legal and ethical parts of healthcare, said that age alone though could create inequity.

"When you set the age cutoff, say we'll prioritize everybody above 75, you're missing the fact that people's risk at 75 isn't the same," Persad said. "There are real differences and if you set it at 75, you're missing quite a big portion of the sort of potentially preventable deaths in minority populations as opposed to others."

Medical ethicists have previously supported prioritizing vaccine allocation by racial preference, but have expressed fears of legal objections. Persad said legally, one way to prioritize marginalized communities receiving the vaccine first is to focus on zip codes, like Parker suggested.

"I think the focus has to be legally on using approaches that get it at overlapping disadvantages," Persad said. "I think the idea — for instance, looking at the hardest hit or the most vulnerable zip codes using these deprivation or vulnerability indices — that's an approach that's on much sounder ground, legally."

Bridging the racial gap in vaccination is a high priority for President Joe Biden's administration.

"We have to make vaccination easy and accessible," said Dr. Marcella Nunez-Smith, the chair of Biden's COVID-19 Equity Task Force, in an interview with CNN this week. "That's a key priority that's built into President Biden's national plan."