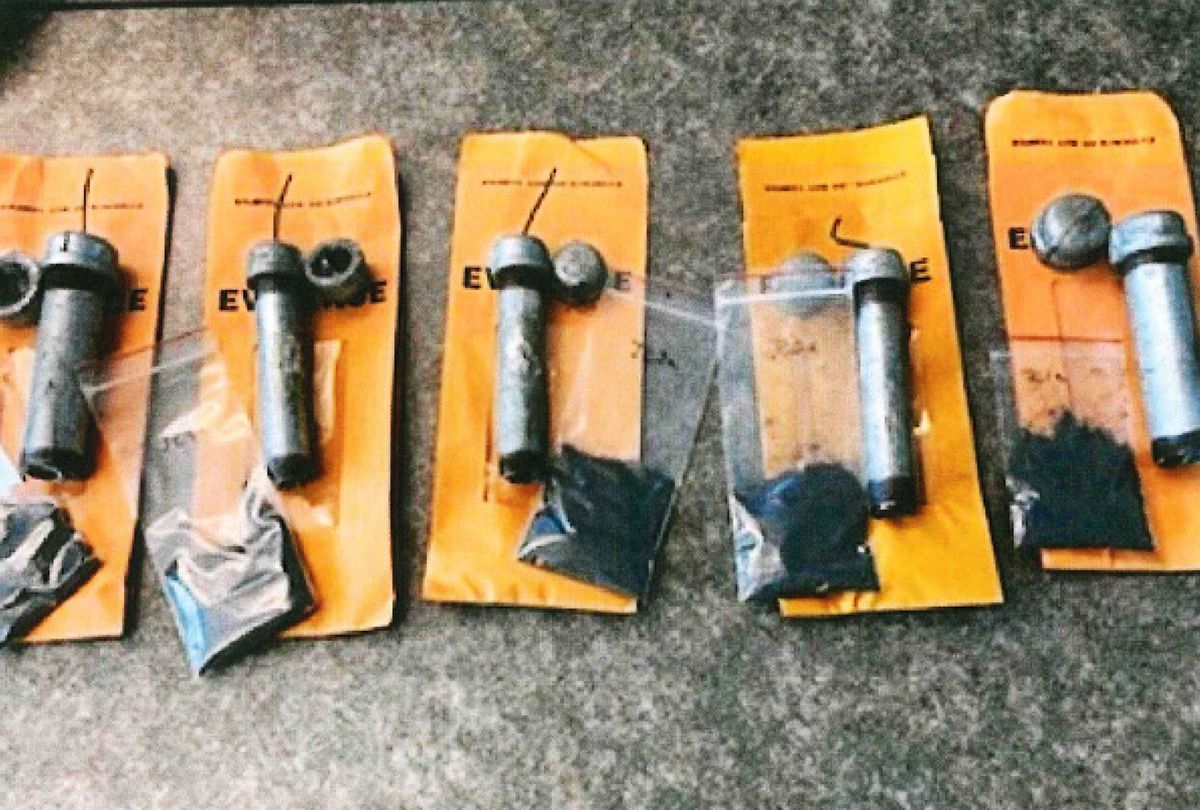 A California man accused of being a right-wing extremist faces dozens of federal and state charges after he was arrested with a cache of weapons and text messages appearing to threaten Democrats and social networks, according to the FBI.

Ian Rogers, 44, was arrested on weapons charges after local law enforcement and FBI agents found five pipe bombs, bombmaking materials, 49 firearms, and thousands of rounds of ammunition during a raid of his Napa County home and auto repair shop, according to an FBI affidavit filed on Tuesday. Some of the guns appear to have been modified, including one that was intended to look like a Nazi-era machine gun and appears to be "capable of firing fully automatic," the complaint said. Investigators also found a Nazi flag, according to prosecutors.

Rogers admitted that he built the pipe bombs but claimed they were for "entertainment purposes only," the FBI said. But investigators found messages suggesting he planned to "attack Democrats and places associated with Democrats in an effort to ensure Trump remained in office."

"I want to blow up a democrat building bad," he wrote in one text message on Jan. 10, days after the deadly Capitol riot, according to the affidavit. "The democrats need to pay," he wrote in another, "let's see what happens, if nothing does I'm going to war."

"I hope 45 goes to war if he doesn't I will," he said in another message, according to the complaint.

Rogers also expressed his intent to attack Facebook and Twitter, which banned former President Donald Trump in the wake of the riot and are both based in Northern California.

"We can attack Twitter or the democrats, you pick," he texted someone else, according to the FBI. The other person suggested they instead "go after" liberal billionaire George Soros, who has been a frequent target of right-wing and anti-Semitic conspiracy theories.

"We can attack Twitter and democrats easy right now burn they're shit down," Rogers replied, according to the affidavit. Targeting Soros, he said, would require a "road trip."

The FBI affidavit alleged that Rogers was planning to "engage in acts of violence himself locally if there was not an organized 'war' to prevent Joe Biden from assuming the presidency."

"I'm thinking sac office first target," he wrote in a message that the FBI believes referred to the Sacramento office of California Gov. Gavin Newsom, a Democrat. "Then maybe bird and face offices," he added, allegedly referring to the offices of Twitter and Facebook.

"Sad it's come to this but I'm not going down with a fight," he wrote, according to the complaint. "These commies need to be told what's up."

Rogers' car also had a sticker bearing the logo of the Three Percenters, which the FBI described as an "extreme anti-government, pro-gun" movement whose name refers to the historically incorrect belief that only 3% of American colonists fought against the British in the American Revolution. Several arrested members of the Capitol mob were also identified as Three Percenters. Members of the group were also linked to an alleged plot to kidnap and publicly execute Michigan Gov. Gretchen Whitmer.

Investigators also found a plastic "white privilege card" that said it "Trumps everything," in an apparent reference to the former president, the FBI said.

Rogers faces up to 10 years in prison for illegal possession charges. Napa County District Attorney Allison Haley told the Los Angeles Times he also faces 28 state felony charges "for possession of the explosives and weapons, including possession of an illegal silencer and multiple unregistered assault weapons." Rogers is now being held on $5 million bond on the state charges.

A spokesperson for the Napa County Sheriff's Office told the outlet that authorities began investigating Rogers after someone close to him reported that he had weapons and was "potentially dangerous to the community." Rogers' lawyer, Jess Raphael, told CNBC that a "disgruntled former employee" fired by Rogers sent a tip to investigators in September and again in October but "nothing was done about it until Jan. 15, after the Capitol riot."

"Why they did nothing for months, I do not know," Raphael told the outlet.

Raphael said that Rogers was "not a member of any militia or hate group, nor did he espouse extremist views" and insisted he was just a "strong adherent of President Trump and a gun collector," though she acknowledged he attended a barbecue hosted by the Three Percenters.

She told The Washington Post that his text messages were a "bunch of hyperbole and pro-Trump histrionics that follow in line with, I guess, tens of millions of other people who supported Mr. Trump."

The arrest comes after California and states across the country stepped up security around the State Capitol and Newsom's home in response to potential threats following the U.S. Capitol attack, which led to Trump's impeachment on one charge of inciting the riot.

"The information contained in the federal criminal complaint regarding Ian Rogers is an all too real reminder of the frightening consequences dangerous political rhetoric can have especially in emboldening violent extremism," Sahar Robertson, a spokeswoman for Newsom, told the Los Angeles Times.

The Justice Department has charged at least 135 people in the Capitol riot but the FBI is still searching for the person who planted pipe bombs at the Washington headquarters of the Democratic National Committee and Republican National Committee on Jan. 6. Tens of thousands of National Guard troops were on hand for Biden's inauguration and many remain stationed in the D.C. area in response to multiple potential threats.

The Department of Homeland Security on Wednesday issued a bulletin warning of a "heightened environment across the United States" that it believes will persist "in the weeks following the successful presidential inauguration."

"Information suggests that some ideologically-motivated violent extremists with objections to the exercise of governmental authority and the presidential transition, as well as other perceived grievances fueled by false narratives, could continue to mobilize to incite or commit violence," the bulletin said.

DHS also warned of potential threats from domestic violent extremists "motivated by a range of issues, including anger over COVID-19 restrictions, the 2020 election results, and police use of force" who may have been "emboldened" by the Capitol riot, though it did not name any specific groups.

"In my view, it is domestic terrorism mounted by right-wing extremists and neo-Nazi groups," Michael Chertoff, who served as Homeland Security secretary under George W. Bush, told The New York Times. "We have to be candid and face what the real risk is."