Trump's treatment of immigrant children was shocking. The effect of U.S.-led wars on children's lives is much worse 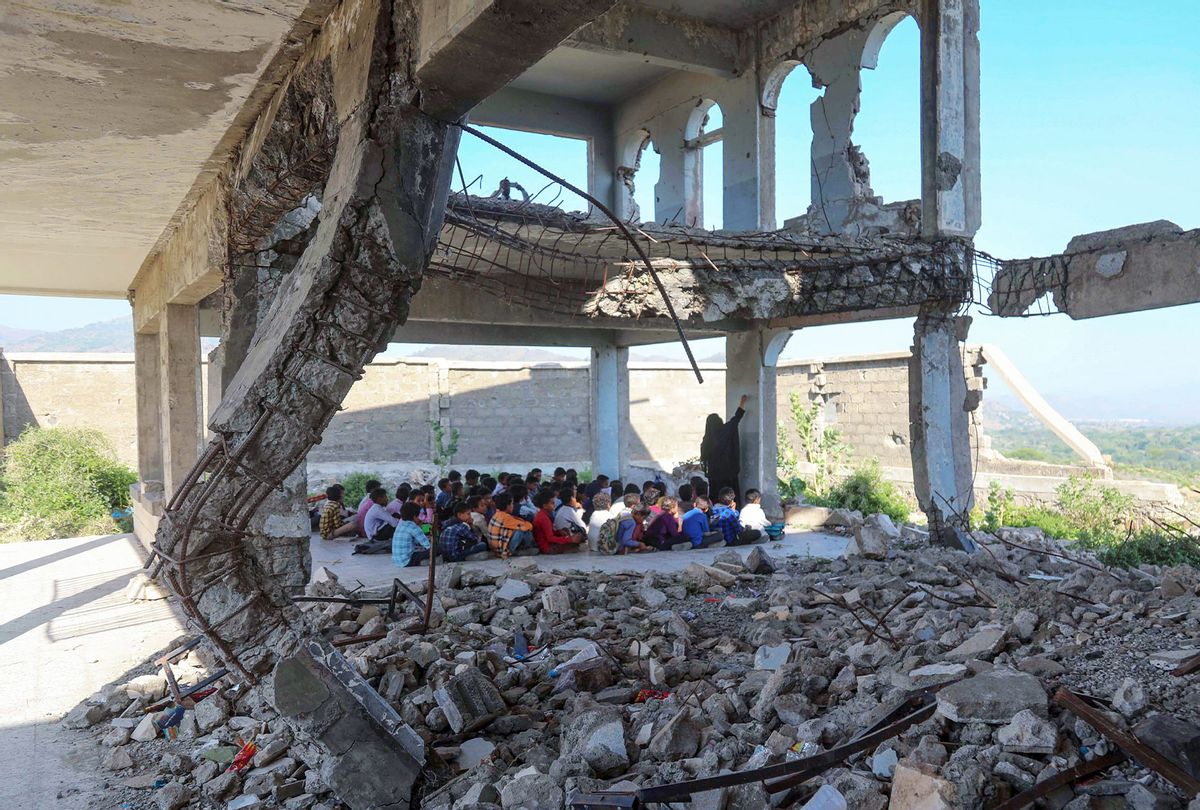 Yemeni pupils attend class on the first day of the new academic year, in a makeshift classroom in their school compound which was heavily damaged in the fighting between the government and Iran-backed Huthi rebels, in the country's third-city of Taez on October 7, 2020. (AHMAD AL-BASHA/AFP via Getty Images)
--

Most people regard Donald Trump's treatment of immigrant children as among his most shocking crimes as president. Images of hundreds of children stolen from their families and imprisoned in chain-link cages are an unforgettable disgrace that President Biden must move quickly to remedy, with humane immigration policies and a program to find the children's families and reunite them, wherever they may be.

A less publicized Trump policy that actually killed children was the fulfillment of his campaign promises to "bomb the shit out of" America's enemies and "take out their families." Trump escalated Obama's bombing campaigns against the Taliban in Afghanistan and the Islamic State in Iraq and Syria, and loosened U.S. rules of engagement regarding airstrikes that were predictably going to kill civilians.

After devastating U.S. bombardments that killed tens of thousands of civilians and left major cities in ruins, the United States' Iraqi allies fulfilled the most shocking of Trump's threats and massacred the survivors — men, women and children — in Mosul.

But the killing of civilians in America's post-9/11 wars did not begin with Trump. And it will not end, or even diminish, under Biden, unless the public demands that America's systematic slaughter of children and other civilians must end.

The Stop the War on Children campaign, run by the British charity Save the Children, publishes graphic reports on the harms that the United States and other warring parties inflict on children around the world.

Its 2020 report, "Killed and Maimed: A Generation of Violations Against Children in Conflict," reported 250,000 UN-documented human rights violations against children in war zones since 2005, including more than 100,000 incidents in which children were killed or maimed. It found that a staggering 426 million children now live in conflict zones, the second highest number ever, and that "the trends over recent years are of increasing violations, increasing numbers of children affected by conflict and increasingly protracted crises."

Many of the injuries to children come from explosive weapons such as bombs, missiles, grenades, mortars and IEDs. In 2019, another Stop the War on Children study, on explosive blast injuries, found that these weapons designed to inflict maximum damage on military targets are especially destructive to the small bodies of children, and inflict more devastating injuries on children than on adults. Among pediatric blast patients, 80% suffer penetrating head injuries, compared with only 31% of adult blast patients, and wounded children are 10 times more likely to suffer traumatic brain injuries than adults.

In the wars in Afghanistan, Iraq, Syria and Yemen, U.S. and allied forces are armed with highly destructive explosive weapons and rely heavily on airstrikes, with the result that blast injuries account for nearly three-quarters of injuries to children, double the proportion found in other wars. The U.S. reliance on airstrikes also leads to widespread destruction of homes and civilian infrastructure, leaving children more exposed to all the humanitarian impacts of war, from hunger and starvation to otherwise preventable or curable diseases.

The immediate solution to this international crisis is for the United States to end its current wars and stop selling weapons to allies who wage war on their neighbors or kill civilians. Withdrawing U.S. occupation forces and ending U.S. airstrikes will allow the UN and the rest of the world to mobilize legitimate, impartial support programs to help America's victims rebuild their lives and their societies. President Biden should offer generous U.S. war reparations to finance these programs, including the rebuilding of Mosul, Raqqa and other cities destroyed by American bombardment.

To prevent new U.S. wars, the Biden administration should commit to participate and comply with the rules of international law, which are supposed to be binding on all countries, even the most wealthy and powerful.

While paying lip service to the rule of law and a "rules-based international order," the United States has in practice been recognizing only the law of the jungle and "might makes right," as if the UN Charter's prohibition against the threat or use of force did not exist and the protected status of civilians under the Geneva Conventions were subject to the discretion of unaccountable U.S. government lawyers. This murderous charade must end.

Despite U.S. non-participation and disdain, the rest of the world has continued to develop effective treaties to strengthen the rules of international law. For instance, treaties to ban land mines and cluster munitions have successfully ended their use by the countries that have ratified them.

Banning land mines has saved tens of thousands of children's lives, and no country that is a party to the cluster munitions treaty has used them since its adoption in 2008, reducing the number of unexploded bomblets lying in wait to kill and maim unsuspecting children. The Biden administration should sign, ratify and comply with these treaties, along with more than 40 other multilateral treaties the U.S. has failed to ratify.

Americans should also support the International Network on Explosive Weapons (INEW), which is calling for a UN declaration to outlaw the use of heavy explosive weapons in urban areas, where 90% of casualties are civilians and many are children. As Save the Children's Blast Injuries report says, "Explosive weapons, including aircraft bombs, rockets and artillery, were designed for use in open battlefields, and are completely inappropriate for use in towns and cities and among the civilian population."

A global initiative with tremendous grassroots support and potential to save the world from mass extinction is the Treaty to Prohibit Nuclear Weapons (TPNW), which just came into force on Jan. 22 after Honduras became the 50th nation to ratify it. The growing international consensus that these suicide weapons must simply be abolished and prohibited will put pressure on the U.S. and other nuclear weapons states at the August 2021 review conference of the NPT (Nuclear Non-Proliferation Treaty).

Since the U.S. and Russia still possess 90% of the nuclear weapons in the world, the main onus for their elimination lies on Presidents Biden and Putin. The five-year extension to the New START treaty that Biden and Putin have agreed on is welcome news. The U.S. and Russia should use the treaty extension and the NPT review as catalysts for further reductions in their stockpiles and real diplomacy to explicitly move forward on abolition.

The United States doesn't just wage war on children with bombs, missiles and bullets. It also wages economic war in ways that disproportionately affect children, preventing countries like Iran, Venezuela, Cuba and North Korea from importing essential food and medicines or obtaining the resources they need to buy them.

These sanctions are a brutal form of economic warfare and collective punishment that leave children dying from hunger and preventable diseases, especially during this pandemic. UN officials have called for the International Criminal Court to investigate unilateral U.S. sanctions as crimes against humanity. The Biden administration should immediately lift all unilateral economic sanctions.

Will America's new president act to protect the children of the world from America's most tragic and indefensible war crimes? Nothing in Joe Biden's long record in public life suggests that he will, unless the American public and the rest of the world act collectively and effectively to insist that the U.S. must end its war on children and finally become a responsible, law-abiding member of the human family.