Six degrees of sedition: Was master trickster Roger Stone behind the Capitol riot?

Stone was linked to several "Stop the Steal" events, and has ties to organizers behind the Jan. 6 rally and attack 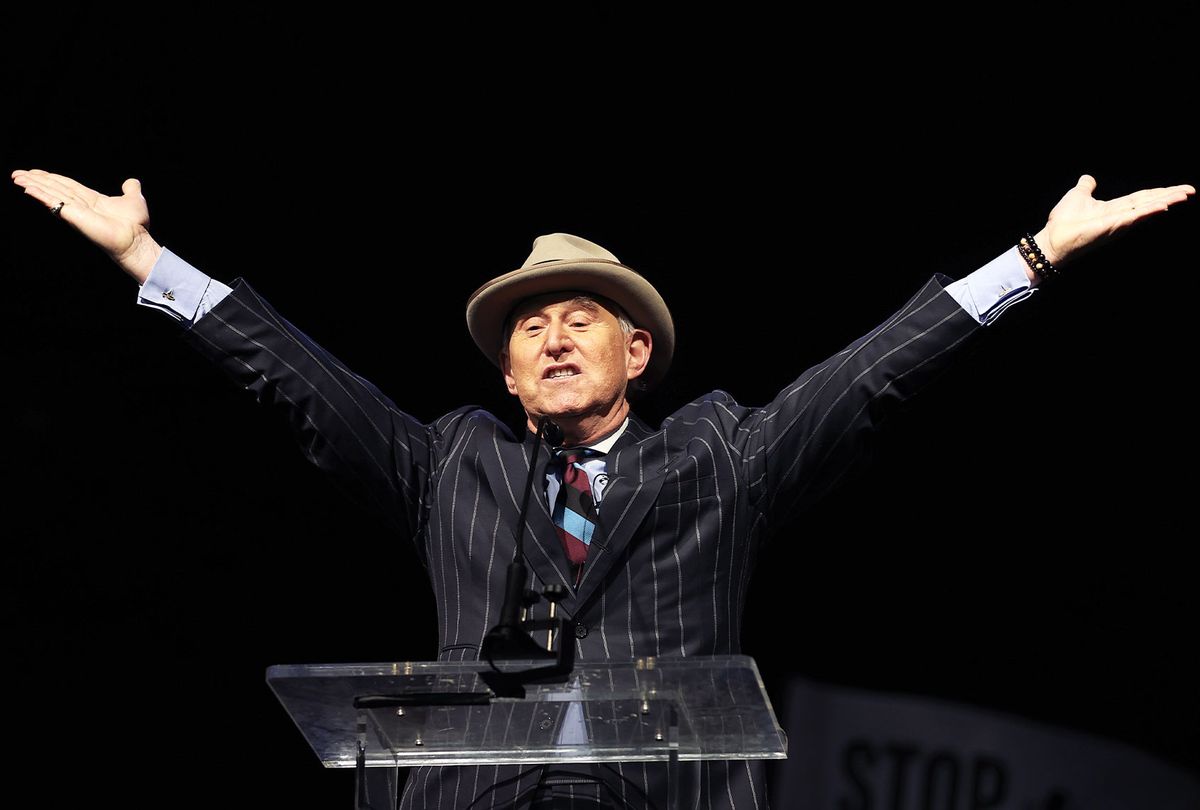 American political consultant Roger Stone is seen on stage as he gives a speech to Trump supporters before the Congress count the Electoral College votes in Washington D.C., United States on January 05, 2021. (Tayfun Coskun/Anadolu Agency via Getty Images)
--

The night before a mob of Donald Trump's diehard supporters laid siege to the U.S. Capitol, longtime Trump confidant and presidential-pardon recipient Roger Stone made his first public appearance in Washington since his trial, giving a pump-up speech at a Freedom Plaza rally organized by a group called Stop the Steal. In a helpful moment of clarity, the emcee for the evening, Stone associate and fellow convicted felon Ali Alexander (formerly Ali Akbar), a driving force behind the events that led to the attack the following afternoon, noted that "It was Roger Stone who coined the term first: Stop the Steal."

Stone did more than coin the term. He registered it with the federal government as a political nonprofit more than four years earlier, in 2016, and appears to have a hand in its successor, which was created less than a month before the 2020 election.

But while Alexander went on to claim to be the "father of the movement," that too traces to Stone, who had organized not just the 2016 effort, but another one two years later. All of this traces back deep in Republican dirty-trick history, all the way to the "Brooks Brothers Riot" orchestrated by Stone to interfere with the 2000 Miami-Dade County recount and help make George W. Bush president.

When Stone, escorted by bodyguards from the Oath Keepers anti-government militia group, delivered the keynote speech at the Freedom Plaza rally on Jan. 5, after showing off his dance moves, in his pinstripe suit and fedora hat, to a hip-hop remix of a song honoring his innocence, he made clear that Alexander had only "revived the Stop the Steal movement." In other words, all of this was, at its root, a Roger Stone production.

It appears that Stone bears as much responsibility as anyone — and quite a bit more than most — for the deadly riot that unfolded the next day, though the extent of his influence has not yet come into public focus.

Roger Stone created the first Stop the Steal organization in April 2016, raising and spending tens of thousands of dollars for the anticipated mission of defending Trump through the contested Republican primary and later challenging an apparent Hillary Clinton general election win, neither of which proved necessary. That group was shuttered in 2017, but Stone, a Florida resident, reactivated the movement after the 2018 midterms — specifically to protect then-Florida Gov. Rick Scott's narrow victory in a U.S. Senate race over Democratic incumbent Bill Nelson. Stone even got help from Alexander, an itinerant provocateur who came aboard to help recruit for the effort, laying out his vision in a Periscope video, as reported in Right Wing Watch, in which Alexander said he hoped to motivate not just Republicans, but QAnon followers, Democrats and "homeless people in all the adjacent counties" to monitor the vote count.

That mission appears to have been something of an ad hoc project, and Stone didn't create an official organization around it. Two years later, though — and three weeks ahead of the 2020 election — a new nonprofit called "Committee to Stop the Steal" was created by a woman named Ashley Maderos, who according to her LinkedIn page works for Jensen & Associates, a personal injury firm in Southern California headed up by Paul Rolf Jensen, who has represented Stone for at least two decades. Jensen was also on the payroll for Stone's Committee to Restore American Greatness, which became a target of former special counsel Robert Mueller's investigation into Russian interference in the 2016 election.

In September 2020, just a few weeks before Maderos registered the Committee to Stop the Steal, Ali Alexander posted a Periscope video saying he wanted to revive Stop the Steal for 2020, as reported by Jared Holt for Right Wing Watch. The vision he articulated would create a text-messaging database to deploy Trump supporters to ballot-counts​ and "bad secretary of state" offices across the country, and would provide volunteers with the food, shelter, vitamins and "electrolytes" they would need to stop the proverbial steal. Where the funding for this would come from was unclear.

"In the next coming days, we're going to build the infrastructure to stop the steal," Alexander said in the video. "What we are going to do is we're going to bypass all of social media. In the coming days, we will launch an effort concentrating on the swing states, and we will map out where the votes are being counted and the secretary of states. We will map all of this out for everyone publicly and we will collect cell phone numbers so that way if you are within 100-mile radius of a bad secretary of state or someone who's counting votes after the deadline or if there's a federal court hearing, we will alert you of where to go. We're going to bypass all of Twitter, all of Facebook, all of Instagram, OK? We're going to bypass it all."

About a month later, the Committee to Stop the Steal was launched by Stone's associates. By November, Stone was posting disinformation about Trump's defeat.

Alexander spearheaded the grassroots and political dimensions of the protests that he eventually carried to the Capitol on Jan. 6, even launching a Stop The Steal super PAC in November, as first reported by Salon. In December, amid escalating violent rhetoric, Alexander boasted that the movement had attracted the cooperation of three far-right Republican members of Congress — Paul Gosar and Andy Biggs of Arizona and Mo Brooks of Alabama — who were helping him exert a "maximum pressure" campaign on Capitol Hill.

But the political and publicity efforts were just one arm of Stone's influence on the riot. His other contribution appears to have been brute force — the aforementioned Oath Keepers, as well as the neofascist Proud Boys.

After the insurrection, The Wall Street Journal revealed that the Proud Boys played a major role in the violence on Jan. 6, and a number of group members and affiliates have since then been arrested and named in federal indictments. The Proud Boys also have longstanding ties to Stone, in recent years acting as a personal security detail during his trial and his public appearances. In November 2019, self-described Proud Boy "organizer" Joe Biggs traveled to Washington to support Stone at his trial, and in a video interview ahead of the trip said that he would be joined by current Proud Boy leader Enrique Tarrio and founder Gavin McInnes. Biggs can be seen in a number of videos from the Capitol riots, including images shot inside the building, and was arrested last week on charges of impeding Congress, illegal entry and disorderly conduct.

A video recorded outside the Capitol grounds just before the attack shows a group of Proud Boys psyching themselves up ahead of confrontations with police. The videographer can be heard hawking "Enrique did nothing wrong" shirts — a Proud Boy spin on the "Roger Stone did nothing wrong" catchphrase.

At this writing, no clear digital trail connecting the Capitol violence to Stone has yet emerged, although it would shock exactly no one of the ongoing investigations revealed a direct link. The Proud Boys and Oath Keepers have appeared in numerous photographs and videos providing security to Stone, including on the night of Jan. 5. Law enforcement officials are currently sorting through countless photographs and hours of video pulled from social media, showing who exactly was in or near the Capitol complex the next day. Hackers who exploited an absurdly simple vulnerability in the alternative social media platform Parler, now at least temporarily defunct, have uploaded dozens of terabytes of data to the web, some of which has already been put to use. Facial recognition software has also yielded results, such as the massive Faces of the Riot open-source database.

On the night before the rally, Stone surrounded himself with symbols of potential violence in the form of his Oath Keeper security detail, who also chauffeured him around in a golf cart. When he spoke, he made clear that he knew exactly what would drive the masses over the police barricades the following afternoon, casting the futile fight in the common language of the QAnon fantasy movement, of a struggle between "dark and light, between the godly and godless, between good and evil."

Reached for comment for this article, Stone told Salon to "have a nice day."