The absolute best way to cook kale, according to so many tests

From braising to roasting to steaming, here's how to make the tastiest kale in town 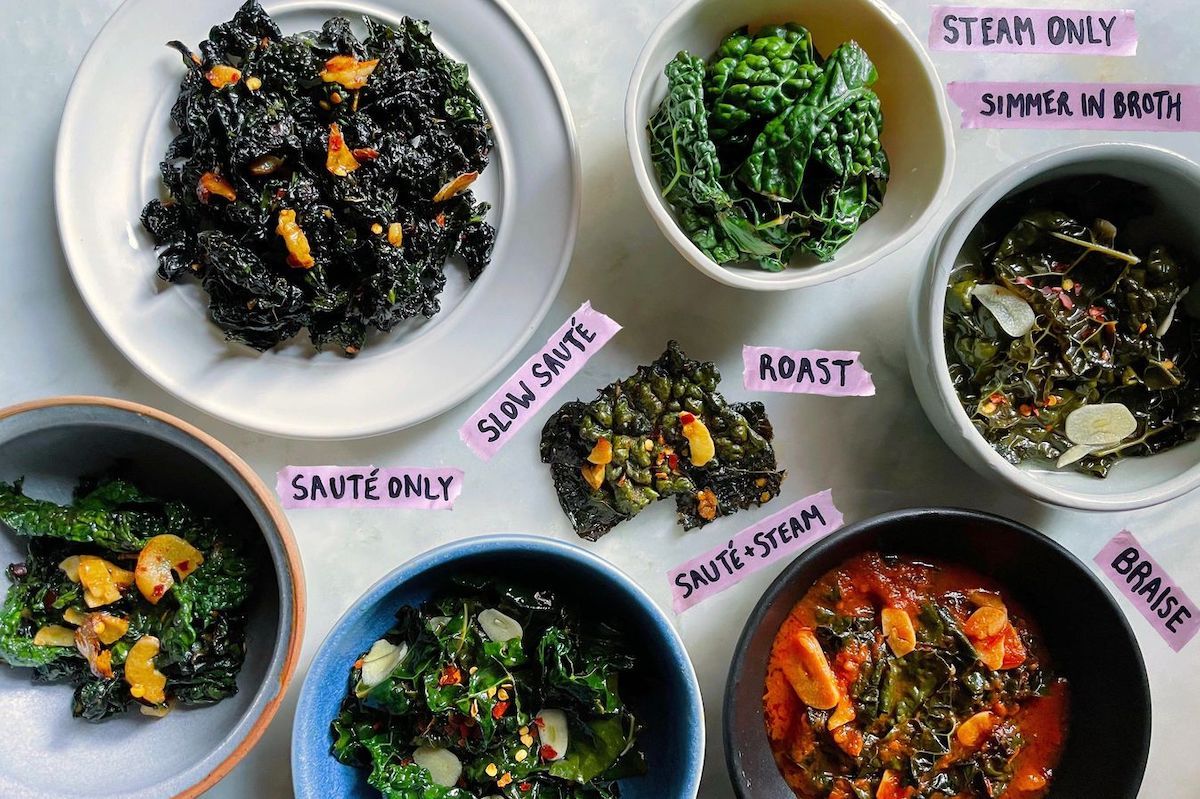 In Absolute Best Tests, Ella Quittner destroys the sanctity of her home kitchen in the name of the truth. She's boiled dozens of eggs, mashed a concerning number of potatoes, and roasted more broccoli than she cares to recall. Today, she tackles kale.

Kale has lived a thousand lives.

It's spent decades as a frilly, slow-wilting garnish for salad bars and shrimp towers alike. Since the dawn of the 21st Century, it's moonlighted as a status symbol for the tote-touting, farmers-market-evangelizing city dweller. It found an especially bright 15 minutes of fame as the single word emblazoned on a sweatshirt Beyoncé wore in her music video for "7/11." It was roasted into chips by Gwyneth Paltrow on primetime television. It's been the hero of 2,000-word profiles and the villain of snappy teardowns. It's frost-resistant, enjoys a harvest during the time of year when the rest of us hibernate, and one cup of it has 134% of your daily recommended vitamin C, for the love of god. So there's little to say about the leafy green that ceaseless trend pieces haven't already bellowed.

It has been around for millennia, at least since its proliferation through Europe and Asia during the Middle Ages. Consequently, there are more ways to cook kale than there are ways I can think of to entertain myself during this final stretch of self-quarantine. Convenient. Here, I've narrowed the list of kale methods down to seven, and pitted them head-to-head in a competition of texture and flavor. Which bought me about two days. Shall we?

If you ever want to feel like you're living in a Juice Generation, consider purchasing 10 bunches of lacinato kale and storing them front and center in your otherwise empty refrigerator. Should you then want to obliterate that fantasy instantaneously, simply toss in about 25 peeled garlic cloves and a bowl of crushed red pepper flakes. Which is a verbose way of revealing that for each test I used:

Where specified, I employed additional ingredients like chicken broth and crushed tomatoes. Oil was naturally excluded in the Steam Only trial — as were the garlic and red pepper flakes, since I forgot to add both to the steamer and would have thus had to eat both raw. (I have boundaries.)

Ninety-eight words on kale choice: I used lacinato, also known as dinosaur kale, because it's easiest to de-rib in a hurry (see above re: 10 bunches), and I love the earthy, vegetal flavor. There are many varieties of kale, all of which are worthwhile, and would lend themselves well to these methods. These include curly kale (the dark green stuff with winding tendrils of leaves), Chinese kale (broccoli-like stems you should fully hang on to and cook, with smaller leaves), and red Russian kale (red-stemmed with leaves that need not be cooked quite as long as lacinato to achieve comparable tenderness), among others.

Inspired by The Kitchn.

Forget what I said back there about having boundaries —I  would like to propose to the Sauté Onlykale and spend the rest of my life eating it (not in an Armie Hammer way). It was tender enough — though nothing like the velvety Blanch and Slow Sauté or Braise batches; more on those in a minute — with just an inkling of body and chew. The light scorch of the greens merged perfectly with the tart lemon, smoky-hot pepper, and piercing salt for an intense few bites. Crispy garlic was, as they say, the garlic on top. (Nobody says this.)

The Sauté and Steam kale ranked top of the class for efficiency, but bottom for texture and flavor. The kale itself wasn't as fully seasoned as Sauté Only kale — the broth diluted things somewhat, and I suspect also prevented the greens from taking in as much salt and acid. The kale's texture was the tiniest bit gummy rather than silky. But it was perfectly edible (a crispy fried egg would've done wonders) and a little softer than the Sauté Only kale, so I will still use this method when I'm after gentler textures. But I'll be sure to layer in more seasoning when I do.

My first impression: The kale appeared fluffier than any other batch, like it had lost less water in the cooking process. (Plus, there was no oil to weigh it down.) Its texture reflected this, with a softness that seemed plusher and lighter than the leaves of other methods. Flavor-wise, this was the grassiest of the bunch, so if you're in it for the fresh green vibes, Steam Only could be your method. Perhaps because of the lack of garlic and red pepper flakes, the lemon punched through in a big way.

Despite how dire and limp the situation appeared about 15 minutes in, by the 22-minute mark I had crisp, boldly flavored chips that shattered like fiberglass or my self-confidence in almost any workout class. While lacking in structural integrity — the hummus I dipped these in looked like it hosted a shipwreck — the roasted kale chips disappeared quickly, thanks to the little ones. (That's what I call my alter-egos. I do not have children or pets.)

Inspired by Food and Wine.

Oh, baby! About once a week, I encounter a cooked vegetable situation that makes me want to drop everything and boil a pound of rigatoni so I can mix everything together and cover it in cheese. The kale from the Braise method officially joined the ranks of Most Pastable Vegetables as soon as it was ready. The braising liquid and leaves created something reminiscent of ribollita and Sunday sauce at the same time. Which is to say, I poured it directly into my mouth. Was this fair to include in the trials since it added delicious tomato to the mix? Probably not. To even the playing field, I admit that the cooked kale on its own tasted a little bitter, a flavor not present in any other method. OK, back to pouring hot kale — tomato juice into my mouth.

Inspired by The Zuni Café Cookbook, via Orangette.

The texture of the Simmer in Broth kale was so wonderful and unique, it inspired me to draw a series of stars around the phrase "buttery roughage" on my to-do list. The kale was beyond soft, like silk slapped with a meat tenderizer and, despite its faded hue, had a delightfully subtle flavor. Like the Sauté and Steam kale, if I were making this outside the bounds of a restrictive head-to-head test, I would add additional seasoning, as the broth dilutes most of the salt, pepper, and lemon. Regardless, this batch begged to be poured over stale sourdough with a dollop of chile crisp. (Seriously, it wouldn't stop begging, until one of my "little ones" threatened to pour it in the trash.)

So much to unpack. Obviously, after being slow-sautéed for 30 minutes with lots of garlic, oil, and friends, this kale tasted like something I would pay $14 for at a Tuscan restaurant. Less obviously, whoa, blanching kale! What a trip. The resulting greens lost so much volume that by the time they hit the Dutch oven, I was working with less than a cup of leaves. The blanching stripped away any hint of bitterness, which was cool, and I suspect gave the greens a jump-start in softening.

There are so many delightful ways to cook kale: