Massachusetts senator to TV biz-show host: "How about a counter-argument ... that's based on fact?" 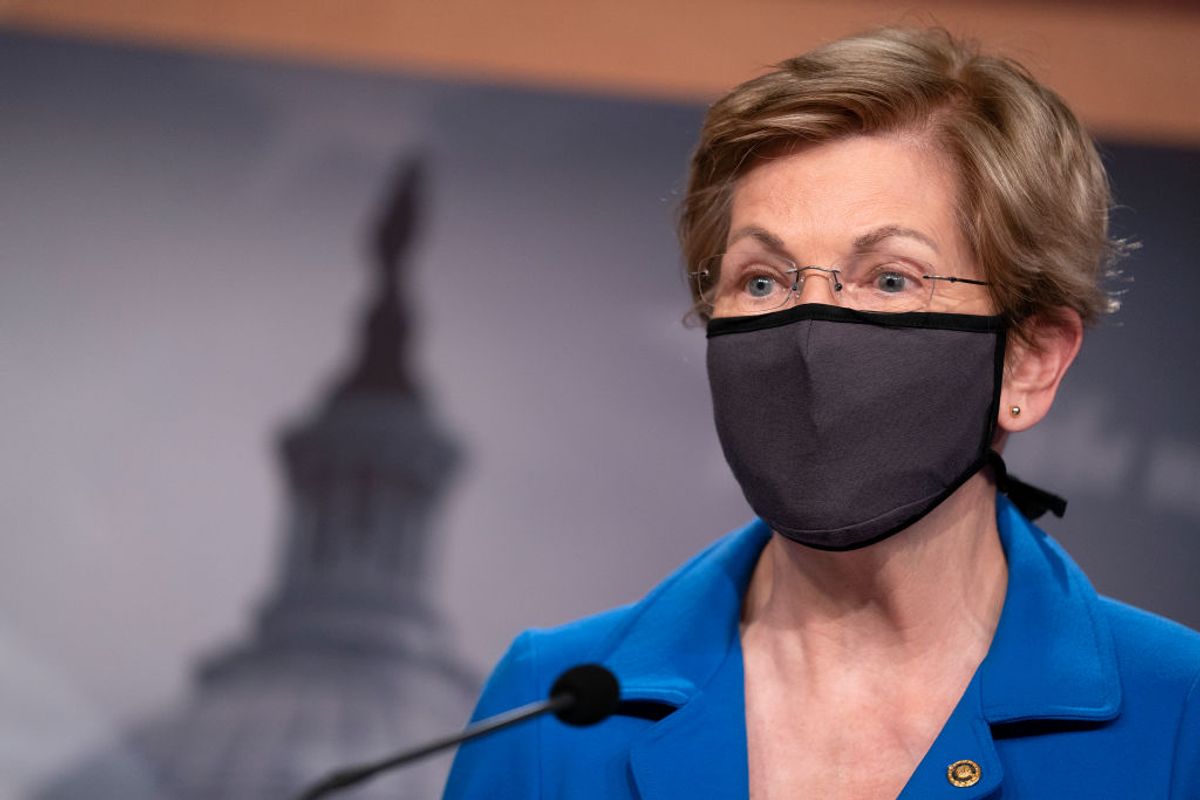 "There is no evidence that anyone is going to leave this country because of a two-cent wealth tax."

That's the two cents Sen. Elizabeth Warren shared on Thursday in response to CNBC host Sara Eisen's fear-mongering about the alleged consequences of requiring the super-rich to pay their fair share in taxes.

After Eisen asserted that a wealth tax "might ... chase wealthy people out of this country as we've seen has happened with ... other wealth taxes," the Democratic senator from Massachusetts asked: "Can we just keep in mind, right now, in America, who's paying taxes?"

"If they added a two-cent wealth tax," Warren noted, "they'd still be paying less than most of the people in this entire nation. ... Someone has to pay to keep this nation going. And right now, what the 0.001%, the wealthiest people in this country, have said is: 'Let's let everyone else pay for it.'"

The reason for that, Warren explained, is because the mega-rich want to continue to increase their wealth as much and as quickly as possible.

"Can we have just a little fairness here?" the senator pleaded.

After Eisen chimed in to say she was simply playing devil's advocate, Warren retorted: "How about a counter-argument ... that's based on fact?"

The fact is, Warren said, "The wealthiest in this country are paying less in taxes than everyone else."

"You're telling me that they would forfeit their American citizenship if they had to ... step up and pay a little more?" the senator asked. "I'm just calling your bluff on that. That's not going to happen."

Warren's defense of a wealth tax comes as the ongoing GameStop saga has provoked renewed scrutiny of Wall Street's role in intensifying inequality, leading to calls for greater financial regulation and redistributive policies such as a financial transactions tax.

In her appearance on CNBC, Warren pointed out the stark disconnect between the stock market and the real economy. The apparent rigging of the rules to favor hedge funds over ordinary people has been exposed not only by trading app Robinhood's heavy-handed and widely-condemned crackdown on Redditors who tried to out-maneuver the masters of casino capitalism, but also by the fact that 660 billionaires have added $1.1 trillion to their collective wealth since March 2020, in the midst of immense working-class suffering.

While millions of U.S. households have been devastated by the COVID-19 pandemic and ensuing economic meltdown, "the stock market, which has become the giant casino and the playground for the billionaires, just keeps spinning upward," said Warren.

Echoing Sen. Bernie Sanders, I-Vt., who on Thursday lambasted a billionaire investor for complaining about the prospect of the uber-wealthy having to pay their fair share in taxes while millions go hungry, Warren commented on the "K-shaped" nature of the anemic recovery.

Chastising Republicans for their refusal to deploy adequate funding for vaccine distribution, nutrition assistance and the safe reopening of child care centers and schools, Warren added that the coronavirus crisis could accelerate wealth inequality "at a rate that we had never even imagined in our worst nightmares."

"That is a core part of the American economy," Warren added, "and that's where Congress needs to respond and we need to respond quickly and forcefully."