House Republicans are cracking up along Trump lines

Rep. Marjorie Taylor Greene may be stripped of her committee seat and Rep. Adam Kinzinger is targeting his own 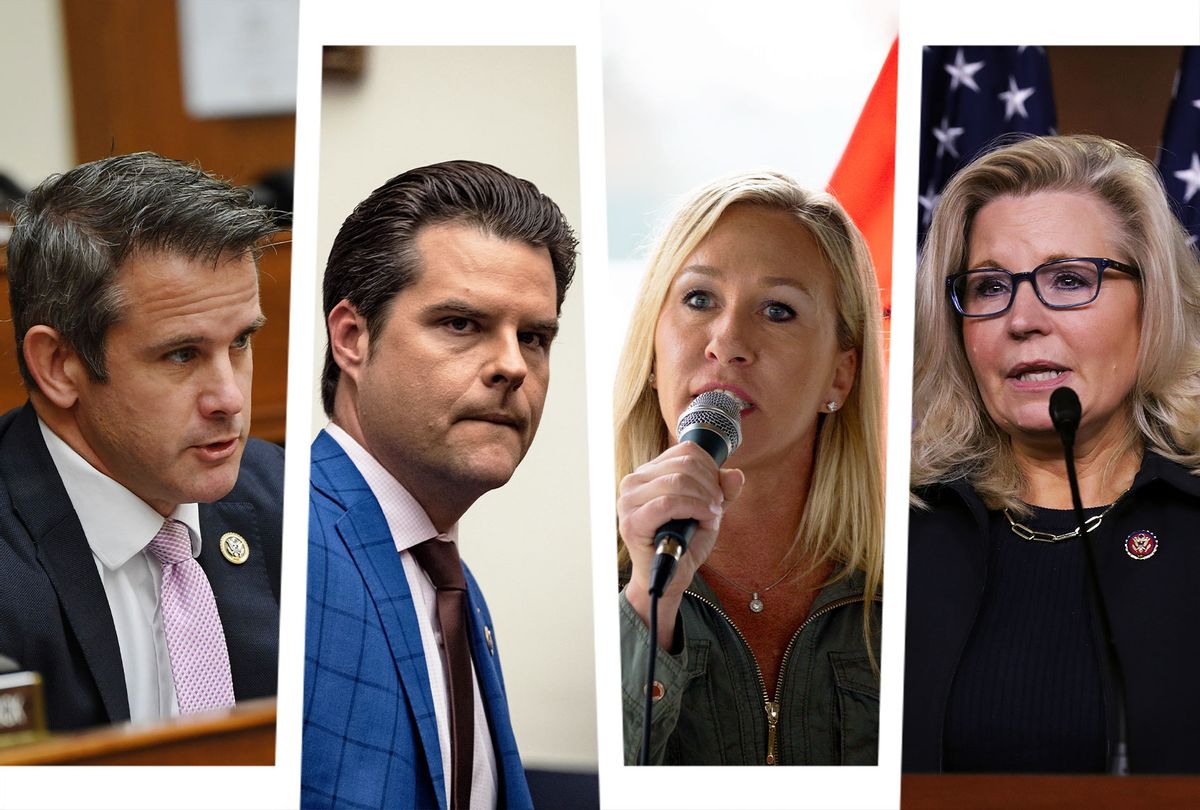 There is a partisan storm brewing within the GOP.

The fate of two House Republicans, Rep. Liz Cheney, R-WY, and Rep. Marjorie Taylor Greene, R-GA, two congresswomen who lie on opposite ends of a post-Trump Republican Party, will be decided this week as their colleagues convene to discuss whether they will keep their leadership and committee seats.

The House Rules Committee will move Wednesday to begin the process of removing the freshman flamethrower from Georgia off of the Education and Labor committee Republicans just assigned the infamous conspiracy theorist to. Greene, who has a strong affiliation with QAnon, has called for the deaths of various Democratic lawmakers, accused the Rothschild family of using space lasers to start wildfires, linked Israel to the Kennedy assassination, and has labeled several school shootings as "false-flag affairs."

The intra-party storm is a culmination of a weeks-long battle within the House following the Capitol riot on Jan. 6 that has since placed Republican lawmakers in something of a political quandary. Should they continue in the GOP's past direction –– that is, Trump-era demagoguery, radicalism, and conspiracy –– or attempt to "restore the soul" their party, bringing it back to a pre-Trump state of respectability?

Rep. Liz Cheney, who voted on Jan 13 to impeach President Donald Trump, is one of few House Republicans in support of the latter. Cheney will come under scrutiny this week on Wednesday, as a House Republican Conference will assemble to discuss whether her impeachment vote warrants expulsion from Congress. According to Politico, at least 107 of Cheney's colleagues have said they are willing to vote against her on a secret ballot.

Cheney, who was the subject of widespread Republican outrage, was joined by nine other Republicans, including Rep. Tom Rice, R-SC, Rep. Peter Meijer, R-MI, Rep. Dan Newhouse, R-WA, and Rep Adam Kinzinger, R-IL, who has launched a new PAC to challenge Republican support of Trump, likening his PAC's mission to that of the Lincoln Project, the NeverTrump super PAC whose founder was recently accused by 21 young men of making inappropriate sexual comments online.

Rep. Matt Rosendale, R-MT, who is leading the charge to expel Cheney, said last week, "[Rep. Cheney] has proven that she is out of step with the vast majority of our conference and the Republicans across the nation," adding, "A lot of people within our conference have a problem with it."

"She took a position as a No. 3 member in conference, she never told me ahead of time," McCarthy told CNN. "She can have a difference of opinion, but the one thing if we're going to lead within the conference, we should work together on that as a whole conference because we're representative of that conference. So I support her, but I do think she has a lot of questions she has to answer to the conference."

Cheney's expulsion will require that lawmakers convene immediately unless two-thirds of the conference demands an immediate vote. Those who have come to Cheney's defense include Rep. Nancy Mace, R-SC, Rep. Chip Roy, R-TX, and Rep. Dan Crenshaw, R-TX.

Also in the national spotlight is Rep. Marjorie Taylor Greene, R-GA, who has rapidly risen to notoriety as a laundry list of social media controversies surrounding the Congresswoman have come to light in the past several weeks. Greene, who has a strong affiliation with QAnon, has called for the deaths of various Democratic lawmakers, accused the Rothschild family of using space lasers to start wildfires, linked Israel to the Kennedy assassination, and has labeled several school shootings as "false-flag affairs."

Greene's team, which has been in a perpetual state of damage control, is now on a crusade to scrub all of her conspiracy-laced rants from the web –– a task which will no doubt prove challenging, given the steady stream of improprieties that continue to surface on a daily basis.

On Saturday, Greene revealed that she'd spoken with President Trump. "I had a GREAT call with my all time favorite POTUS, President Trump!" she said on Twitter, "I'm so grateful for his support [...] The blood thirsty media and the socialists hate America Democrats are attacking me now just like they always attack President Trump."

McCarthy, who plans to have a "conversation" with Greene, has been relatively silent on Greene's conduct otherwise and few other Republican leaders have taken a stance against the freshman congresswoman.

"I think Republican leaders ought to stand up and say it is totally unacceptable what she has said," Sen. Rob Portman, R-OH, told CNN on Sunday. Portman expressed that he "wouldn't be surprised" if Greene were removed from her seat on the House Education and Labor Committee and the House Budget Committee.

Rep. Adam Kinzinger, R-IL, joined Portman. "I'd certainly vote her off committee," echoed Kinzinger. "In terms of eviction, I'm not sure because I'm kind of in the middle. I think a district has every right to put who they want there. But we have every right to take a stand and say, 'You don't get a committee.' And we definitely need to do that."

McCarthy, who met with Trump on Thursday to discuss winning the House majority next year, has urged members of the GOP to refrain from infighting. He also said the former President's support will remain key advantage in regaining the House majority. "United and ready to win in '22," McCarthy tweeted.

With a divided House and the former President's voting bloc now rapidly shrinking, however, McCarthy will have to navigate a rocky political landscape full of partisan landmines to assemble anything close to a united GOP.