"I couldn’t believe it. No one called me," Manchin complains after Harris highlights crisis facing his state 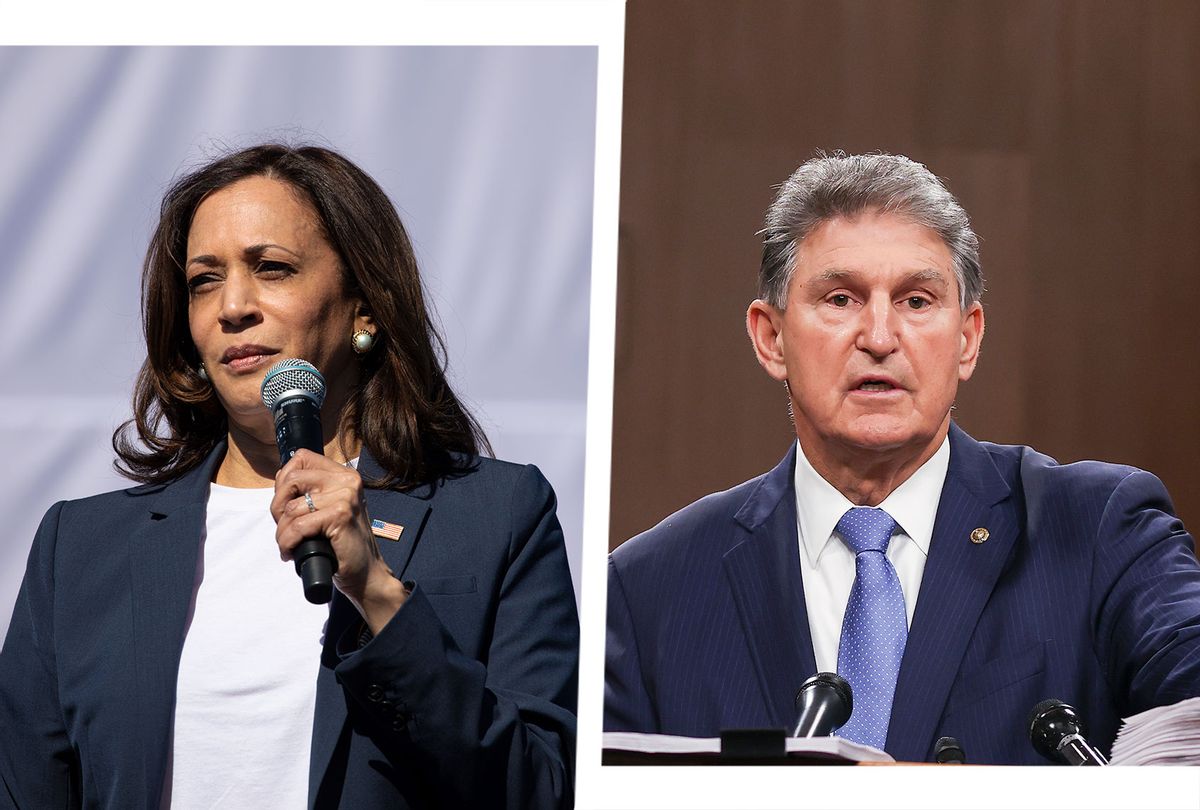 Sen. Joe Manchin, the conservative West Virginia Democrat who is seen as crucial to passing President Biden's agenda, appears to have launched a feud with Vice President Kamala Harris. This came after Harris pushed both Manchin and Sen. Kyrsten Sinema of Arizona, another centrist Democrat, to support the Biden administration's $1.9 trillion coronavirus rescue plan.

Manchin and Sinema have emerged as potential foils to Biden's agenda, and potential allies to "moderate" Republicans eager to slow that agenda down in the name of bipartisan compromise. With the Senate split 50-50, the two hold serious leverage on any bill that Democrats may seek to pass along party lines, and both have already come out against scrapping the filibuster and expressed concerns about Biden's relief plan. Last Thursday, Harris gave interviews to local news outlets in West Virginia and Arizona, seemingly as a way of ramping up the pressure on the two lawmakers to back the proposal, which infuriated Manchin.

"I saw [the Harris interview], I couldn't believe it. No one called me," Manchin told local news outlet WSAZ on Friday. "We're going to try to find a bipartisan pathway forward, I think we need to do. But we need to work together. That's not a way of working together."

Manchin also "conveyed his displeasure privately" to senior White House officials last week, according to Politico, which noted that Harris is not popular in West Virginia and may have caused "eye rolls in the state" when she referred to "abandoned mine lands" as "abandoned land mines" in the interview.

Harris appeared on WSAZ a day earlier to highlight how critical the aid was to Manchin's constituents.

"In West Virginia, one in seven families is describing their household as being hungry, one in six can't pay their rent, and one in four small businesses are closing permanently or have already closed, so it's a big issue in West Virginia and across the country," the vice president said Thursday.

Harris' comments struck an even darker tone in her interview with the Arizona Republic, highlighting the need to expand vaccination to rural areas.

"If we don't pass this bill, I'm going to be very candid with you: We know more people are going to die in our country," she told the outlet. "More people will lose their jobs and our children are going to miss more school. We've got to be here collectively to say that that is not an option in America."

Manchin is part of a bipartisan group of senators that includes Republicans like Mitt Romney of Utah and Susan Collins of Maine, which met with Biden's team last week to urge the administration to limit the $1,400 direct payments included in the proposal.

"We met with his economic team and they put out what they wanted," Manchin told WSAZ. "We want to help everyone that needs help. But if a person's making $250K or $300K, I don't think they're in [as] much need as a person making $40K or 50K. That's all I said. We're going to target."

A group of 10 Republicans, including Collins and Romney as well as some more conservative members of the GOP Senate caucus, on Sunday called for Biden to reduce the payments from $1,400 to $1,000 and to shrink his proposal by more than two-thirds, from $1.9 trillion to around $600 billion. Sen. Rob Portman, R-Ohio, said on Sunday that Republicans will push to limit the direct payments to Americans who earn under $50,000 and couples that earn up to $100,000.

"We want to make the case to the American people across the country. … This is a way to do just that," she told reporters, adding that Harris will do a "number of additional regional calls and regional interviews, as will members of the team."

Biden has repeatedly said he wants to work in a bipartisan fashion, but the Republican proposal is not likely to stop Democrats from seeking to use the budget reconciliation process — which Republicans used in 2017 to push through sweeping tax cuts that overwhelmingly benefited the rich — to pass the relief plan with a simple majority. The Republican proposal would phase out direct payments to those making over $40,000 (compared to $75,000 in previous bills), reduce enhanced federal unemployment benefits from $400 a week in Biden's plan to $300, and would end those benefits in June rather than September. The GOP proposal also rejects Biden's proposed federal minimum wage increase, which would gradually reach $15 an hour, a major goal of progressives for the past several years.

The consensus view among Democrats is that the Republican offer is so much lower than Biden's proposal that it "is not worth entertaining," according to The Washington Post's Jeff Stein.

Some longtime congressional aides also suggested that the Republican proposal was a setup for a bait-and-switch, predicting that the inclusion of highly partisan Republicans like Sen. Mike Rounds of South Dakota and Sen. Thom Tillis of North Carolina means that some in the group are not likely to back any final proposal.

"This letter illustrates Republicans' credibility problem. Half the names here don't pass the laugh test," said Adam Jentleson, who served as chief of staff to former Democratic Senate Majority Leader Harry Reid. "It's one of the more transparent efforts to paper over obstruction I've seen. They're offering a fraction of what Biden proposed and experts say is needed. They came in at exactly 10 signers, meaning only one has to find a reason to peel off. It's just not worth Biden's time."

"In the end this letter will more practically just serve as these [Republicans'] explanation for voting no on the final package," agreed Brendan Buck, a longtime aide to former House Speakers Paul Ryan, R-Wis., and John Boehner, R-Ohio.

With Republican support for the package unlikely, many Democrats are instead worried that Manchin could be the lone vote who blocks a Democratic push to get the legislation passed quickly.

Biden has said he is open to negotiating the parameters of the direct payments.

"There's legitimate reason for people to say, 'Do you have the lines drawn the exact right way? Should it go to anybody making over X number of dollars or Y?'" he told reporters last week. "I'm open to negotiate those things."

Sen. Ron Wyden, D-Ore., argued that reducing the income threshold was dangerous because it was based on past income, meaning that people who lost their job in the last year may not qualify.

Former Federal Reserve economist Claudia Sahm agreed that shrinking eligibility means some people could fall through the cracks, particularly people who lost their jobs but are ineligible or unable to receive unemployment benefits.

"These checks circumvent all kinds of administrative barriers," Sahm told The Hill.

Congressional Progressive Caucus chair Rep. Pramila Jayapal, D-Wash., warned Democratic leaders in a letter last week against "an overemphasis on targeting aid." Jayapal argued that "if you target too much, it becomes harder to get relief out quickly."

Members of Biden's team have pushed back against the idea of more precise targeting as well.

"The checks are better targeted than I think most people realize. Now, that doesn't mean that they just go to folks at the bottom, but that is because it's not just folks at the bottom who need the money," Jared Bernstein, a member of Biden's Council of Economic Advisers, told Bloomberg. "If anybody is listening to me in the $75K to $100K range, many of them, yes, have kept their jobs. Many of them have lost hours. Many have lost wages."

The other costs in Biden's plan are driven by economic needs, not political ambitions, advisers say.

"The president is uncompromising when it comes to the speed that we need to act at to address this crisis," Brian Deese, Biden's top economic adviser, told CNN. "The provisions of the president's plan, the American Rescue Plan, are calibrated to the economic crisis that we face."

A growing number of Democrats have also shrugged off Republican complaints about using the budget process for coronavirus relief, noting that the group backed the process to get tax cuts under Trump.

"Regular people don't care whether we pass something with 51 or 60 votes," Sen. Brian Schatz, D-Hawaii, said on Twitter. "It's a pandemic and the largest economic contraction in 90 years. We must ignore those who call anything a Republican proposes a compromise, and anything a Democrat proposes partisan. We have to deliver."

Bernstein agreed that the "key to getting robust job opportunities is to cease any delay, any inaction, any wait-and-see around this rescue plan."

"The American people could not care less about budget process," he told Fox News. "They need relief, and they need it now."