In 2019, Marjorie Taylor Greene told protesters to "flood the Capitol," feel free to use violence

As a candidate, Greene told followers "we should feel like we will" resort to violence "if we have to" 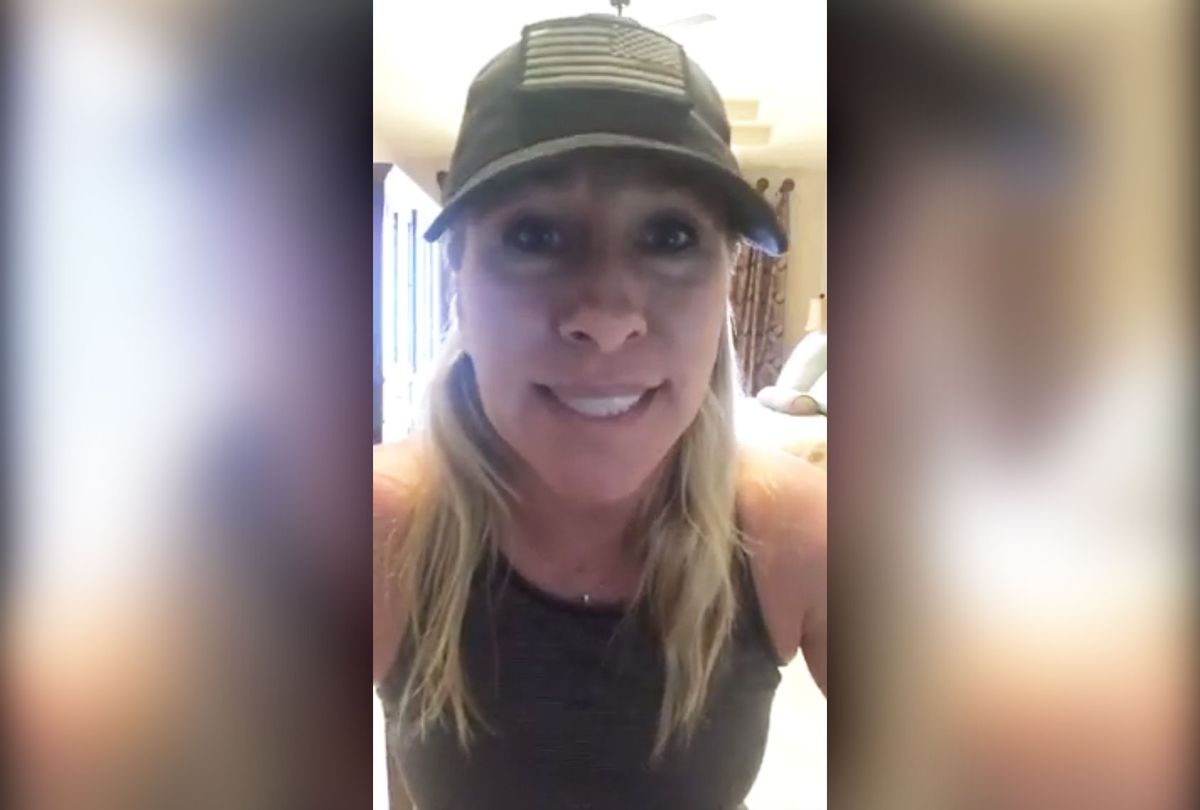 In a video posted to social media months before announcing her congressional candidacy, Georgia Republican Marjorie Taylor Greene called on supporters to "flood the Capitol Building" in a protest against "tyrannical" leaders, telling them that Democratic lawmakers "should fear us" and that "we should feel like we will" use violence "if we have to."

"All of us together, when we rise up, we can end all of this. We can end it," Greene said in the 90-minute rant, which was posted in February 2019 and unearthed on Sunday by Twitter user @zedster. "We can do it peacefully. We can. I hope we don't have to do it the other way. I hope not. But we should feel like we will if we have to. Because we are the American people."

Greene, an adherent of the QAnon fantasy movement whose internet posts about conspiracy theories had by that time already attracted a following, posted the video to recruit attendees for a Feb. 23, 2019, "Fund the Wall" march in Washington. At the time, the Southern Poverty Law Center described the event as Greene's "brainchild," citing national support from right-wing militia group American Defence Force. (It also featured members of Cowboys for Trump, including group leader Couy Griffin, who was recently arrested for his role in the Jan. 6 riots.)

In the video, Greene invoked a sprawling battle that pit "Americans" against an "out-of-control, tyrannical, insane" federal government, declaring that the latter's leaders should be "cowering in fear."

"They are nothing, and they should fear us. ... They should be cowering in fear," she said. "And you know what, if you show up in big numbers on Feb. 23, oh I promise you, I promise you, they'll be struck with fear on the inside." The enemy, she said, was not limited to Democratic leaders — "communist traitors and Islamist lovers" — but extended to a larger apparatus that the future congresswoman described as "all these different agencies and the courts, and all these different offices."

Greene continued: "Feb. 23 — may be kind of cold. We're gonna go inside. We're gonna be warm. And we're gonna demand that our federal government serve we the people, because we're sick and tired of their ways."

Some protesters did indeed find their way into the Capitol, including Greene, who can be seen among a group haranguing Rep. Maxine Waters, D-Calif., in her office, according to a video posted to Instagram by conservative internet personality and since-convicted criminal Omar Navarro. (At another event that day, Greene referred to Waters, a perennial target of death threats, as a "piece of taxidermy.")

Greene, like fellow freshman Rep. Lauren Boebert, R-Colo., has longstanding connections to the QAnon universe and militia groups, both of whom played leading roles in the Jan. 6 attack. Those links have given rise to a deep unease among Democratic colleagues who were targeted in the attack, many of whom have called for Greene's censure or expulsion from Congress. Those calls escalated last week when news broke that in 2019, Greene endorsed executing top Democrats on social media, including "liking" a Facebook post that suggested removing House Speaker Nancy Pelosi with "a bullet to the head."

At a press conference convened in response to that story, Pelosi said that Congress will likely need to increase its security budget because "the enemy is within the House of Representatives."

A Greene spokesperson did not reply to Salon's request for comment.