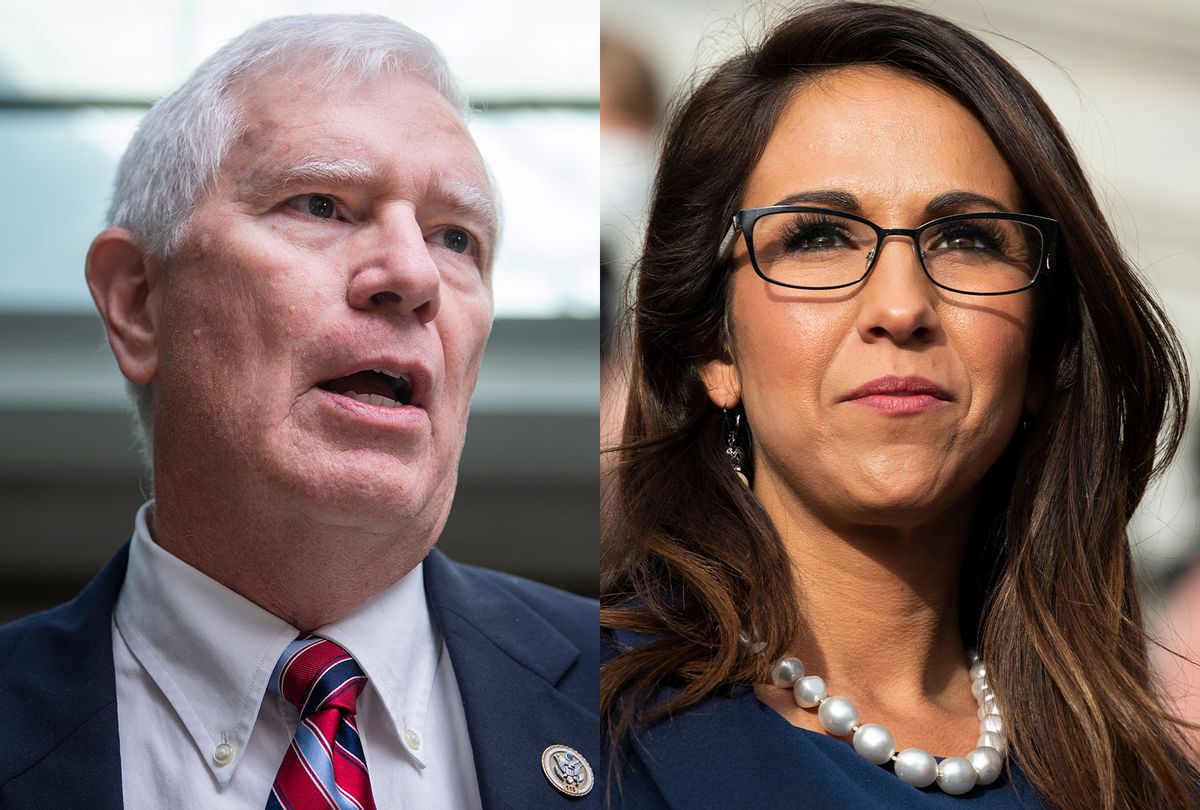 A last-minute Trump administration decision to relocate a major Air Force command office to Alabama may bear marks of a favor to Republican Rep. Mo Brooks, who shilled for the former president's election lies and played a role in the events surrounding the Jan. 6 insurrection.

The full Colorado congressional delegation, including GOP freshman outsider Rep. Lauren Boebert, has called on the Biden administration to investigate "significant evidence" of unspecified political influence behind the decision.

"Significant evidence exists that the process was neither fair nor impartial and that President Trump's political considerations influenced the final decision," the nine lawmakers wrote in a Jan. 26 letter, led by Democratic Sen. Michael Bennet. The letter criticizes an unusual decision process conducted after the Pentagon had previously selected Colorado's Peterson Air Force Base in 2019, which former Secretary of Defense Mark Esper declared "unfair."

The delegation asked Biden to "pause all actions" before an inquiry is settled.

The dispute centers on which state will host the new permanent headquarters of Space Command. For months, it appeared to be a foregone conclusion that the call would go to Peterson Air Force Base in Colorado Springs, which is already home to SPACECOM's current temporary base. But with just a week remaining in former President Trump's term, the administration announced that SPACECOM would be relocated to Huntsville, Alabama.

Colorado Springs Mayor John Suthers told Colorado Public Radio that his city had offered $130 million in incentives to make the station permanent: "It is not in the interest of national security and the American taxpayer to move Space Command."

Republican Rep. Doug Lamborn also demanded an investigation, saying in letter to Biden last Wednesday that "this last-minute decision" to award Alabama a "political trophy" was based "entirely on political expediency [and] will devastate our space capabilities."

Bennet, the Colorado senator who was briefly a 2020 presidential candidate, told Salon in a statement, "Politics has no role when it comes to our national security. Colorado is the only home for U.S. Space Command –– we have the assets, infrastructure, personnel, and ecosystem to support the mission. I will do everything in my power to keep U.S. Space Command in Colorado Springs."

On Dec. 18, Boebert, fresh off her election win but not yet officially seated in the House, signed on to a letter with more than 600 officials and business and community leaders urging the Trump administration to keep the command in her home state. Her name apparently did not sway the former president, who had repeatedly emphasized his support for her candidacy.

Rumors have swirled that Mo Brooks, who represents Huntsville and celebrated Trump's decision, claimed to have "cut a deal" with the outgoing president, but local reports have repeatedly questioned that account. However, a series of events, as well as personal connections, suggest that Brooks may indeed have been secretly working the White House.

Brooks had for months demonstrated his loyalty to Trump by pushing the then-president's lies about the election results, and has been implicated in the events surrounding the Jan. 6 rally-cum-riot, including by one of the organizers. (A number of his Democratic colleagues have demanded Brooks' removal, and an outside GOP group has called on him to resign.) Salon reported last week that after the Capitol attack, longtime Brooks donor and politically-connected Huntsville trial lawyer Mark McDaniel signed on to represent the family of one of the rioters who died in the siege. One of Trump's final acts as president was to name McDaniel to a federal board, which Brooks announced on Jan. 18, five days after the Space Command decision.

McDaniel, coincidentally, has over the years advised several Alabama congressmen on space policy, and has twice been appointed to a federal NASA advisory board, where he is still a member, according to NASA's website. The veteran attorney and GOP donor also gave more than the legal limit to the Brooks campaign last year, even though the Republican incumbent ran unopposed in his deep-red district. Brooks reported refunding that overage on Dec. 2, but just two weeks later McDaniel maxed out to the Alabama conservative's 2022 campaign with a $5,600 contribution on Dec. 17 — one of two donors that month, nearly a full two years before Brooks is again on the ballot.

The day before McDaniel made that donation, he publicly defended Brooks' right to challenge the election results. "Not only does Congressman Brooks have a right to do it, he has a duty to do it. If he feels there is a problem with the election, then he should raise objections to it," he told Huntsville's News19. "And I know there will be a number of other members of the House of Representatives that will probably go along with Congressman Brooks on this."

Brooks sits on two House committees, both of which have oversight related to Space Command: Armed Services and Science, Space and Technology, where he is a member of the Space subcommittee. He has held seats on defense and space-related committees since his first congressional term in 2011, and his campaign finance disclosures show a number of defense contractors among his top donors.

John Henderson, assistant secretary of the Air Force for installations, environment and energy, told Politico that Trump weighed in, but did not "pressure" the military's final decision, which was made in consultation with senior military officials and defense congressional committees — which clearly included Brooks.

The Air Force appraised several cities in its search for the new SPACECOM base, and in announcing the decision said that Huntsville made top marks in "factors related to mission, infrastructure capacity, community support, and costs to the Department of Defense."

"Huntsville compared favorably across more of these factors than any other community, providing a large, qualified workforce, quality schools, superior infrastructure capacity, and low initial and recurring costs," the Air Force said, adding: "Redstone Arsenal offered a facility to support the headquarters, at no cost, while the permanent facility is being constructed." A number of defense-related companies have operations in Huntsville, which is nicknamed "Rocket City" for its involvement with NASA.

The new command will function like other armed services command units, such as Central Command or Cyber Command. It is not the same as the new Space Force branch, which will train and equip troops, but it will provide instruction on space-related operations.

Brooks and the Air Force did not immediately reply to Salon's request for comment.