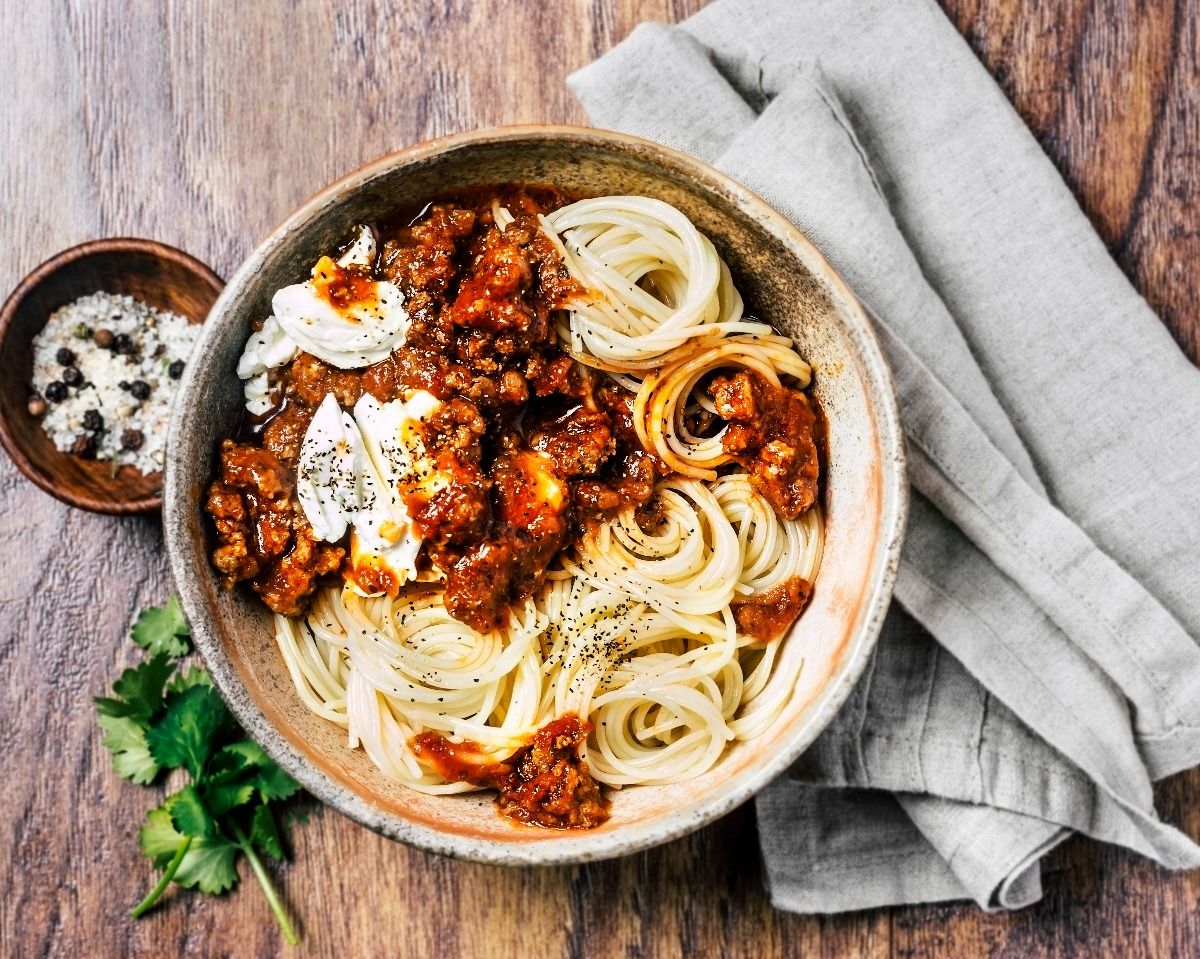 Mid-December, a Tik Tok circulated that left me, to put it plainly, mouth agape. In the clip, made by Tik Tok user Emily Harper, we're promised a trick our narrator learned in "nutrition a couple years ago." Nutrition, I can only surmise, is some sort of health or wellness class, perhaps with a dietary premise. Well, Emily, let's see it.

She starts by adding ground beef to a non-stick pan, pretty standard issue stuff to start. What happened next left me, and a huge portion of the internet, in shambles. She shows us, the viewer, the digital amorphous mob, all the grease and water that seeps out of the ground beef once it's cooked. "All this grease is disgusting," she writes in a text overlay across the now-cooked beef. Emily then moves the pan to the sink, pours out the excess moisture, empties the beef into a metal sieve, and runs it under the tap. The fat collects at the bottom of the sink like an oil slick on asphalt. She returns the rinsed beef to the pan for a final sear before imploring us to "Look at the difference!"

Upon first view, I felt numb. What had I just watched? Had she really washed all the meat grease down the drain? Where had it all gone? Was it ever coming back? What does squeaky-clean beef even taste like? Should I be doing this? Should I not be doing this?

The internet, of course, had opinions.

But Emily, perhaps, was on to something. I mean, cooking ground beef does leave you with a sort of grayish liquid at the bottom of the pan that prevents the meat from ever really browning. I'm always chasing that maillard and that dang water reliably gets in the way. What if there was a workaround — one that didn't involve giving your dinner a bath?

It turns out, there is! Just this week, it came to my attention that non-soggy, nicely browned, crispy ground beef is just a swish of the wrist away. No, really. There's a one-ingredient fix that's completely changing the way I'll cook ground beef from here on out. And chances are, it's already somewhere in your kitchen.

According to this graphic from America's Test Kitchen, all a bunch of ground beef needs is a sprinkling of baking soda and a short sit. The baking soda helps lock in the moisture and prevent the beef from getting soggy, a la Emily.

I decided to give it a try. According to this article in Cook's Illustrated, the baking soda "raises the pH on the meat's surface, making it more difficult for the proteins to bond excessively," and allows the meat to remain tender even as it cooks. They recommended a slurry of baking soda and water and a 15-minute minimum soak before cooking. I took my beef out of its package and sprinkled it with a generous spoonful of the baking soda I had already sitting in the fridge. I decided to forego the slurry and dusted the baking soda directly onto the meat, following the example of this Skillet explainer instead. I mixed it together until fully incorporated and left it to sit for 15 minutes. Then, I put the beef into a hot pan without any olive oil, gave it a stir and left it alone to develop a nice brown crust all on its own.

I came back every few minutes to move it around the pan and let the beef brown on all sides. Very quickly, I noticed an immediate difference. There was very little liquid pooling along the bottom pan and the meat, once I flipped it, was developing a nice crispy edge to it just like I wanted.

Once all the beef had cooked through, I took it off the flame and surveyed the scene. There was, of course, a little grease still left in the pan, but by no means was there any liquid, and all the meat had cooked on the outside. Some of the smaller bits even charred a little. In my excitement, I tossed the beef with some rice, parsley, raisins, pinenuts, sumac, cinnamon, and onion and stuffed some peppers. Right into the oven they went! No beef rinse necessary.

GRAB A SPATULA & COOK WITH US: