How might life be different in a drowned world? Literature is an inevitably rich guide 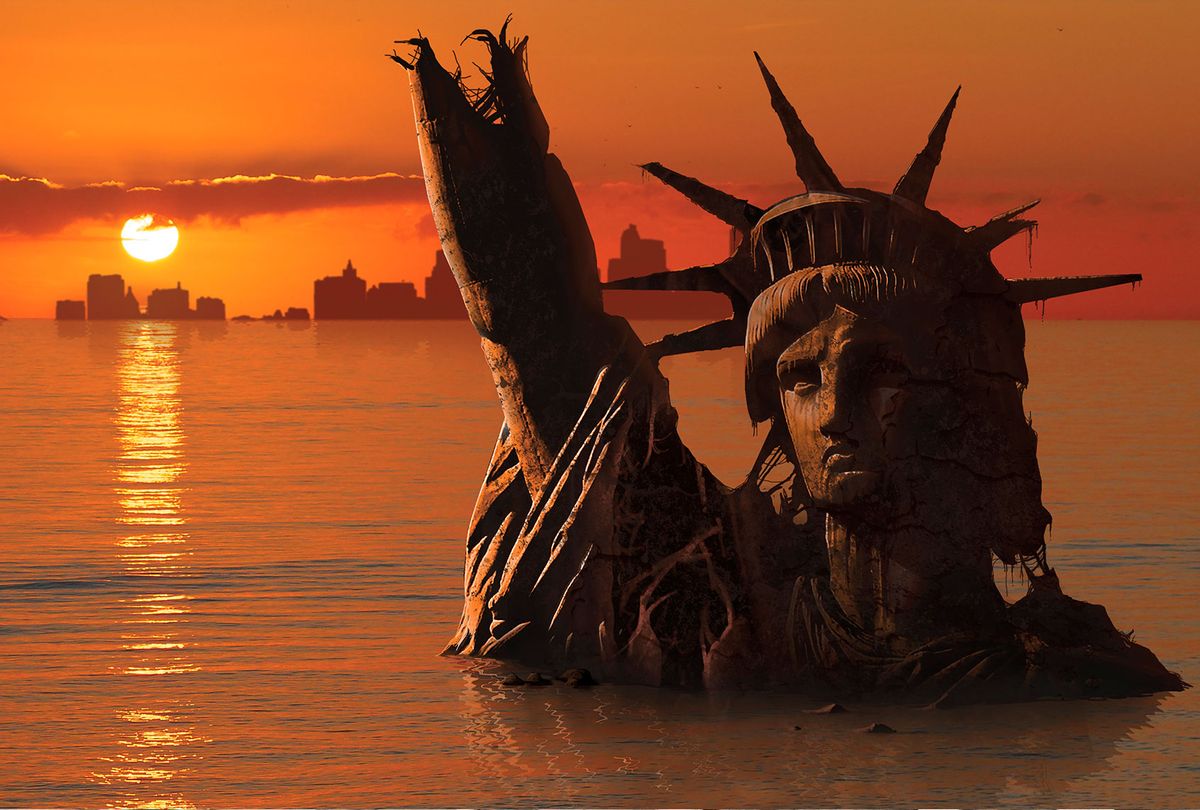 Conceptual illustration of the Statue of Liberty and New York flooded and in ruins, in a possible future showing a rise in sea levels due to global warming (Getty Images)
--

Water was traded on Wall Street alongside oil and gold for the first time in early December 2020. That might seem bizarre, but there is a grim logic at play. Reliable sources of water that have nourished civilisations throughout history – the glaciers and ice packs that release a steady flow each spring – are shrinking. New research has revealed that the world is losing ice 65% faster now than it did in the 1990s, at a rate of 1.3 trillion tonnes a year.

In works of climate fiction, depictions of environmental disaster often focus on the very property of water that has brought it to the attention of futures traders: its volatility. It has fed fantasies of flooded future worlds throughout history. But with the melting of the world's ice sheets tracking the worst-case scenarios of scientists, the stories no longer seem so fantastical. A sea-level rise of two-and-a-half metres is possible by 2100, according to the estimates of the National Oceanographic and Atmospheric Administration in the US.

These predictions resonate with prophecies that have haunted cultures since the dawn of language. How might life be different in a drowned world? Who is responsible for the flood? And how can people alive today face this sea-soaked future? Literature is an inevitably rich guide.

The story of a world-destroying flood reaches back in Judeo-Christian traditions to Noah's ark and beyond that, to the Sumerian flood story that dates to around 2000 BC. This was passed down in hushed voices around campfires until it was recorded on Tablet XI of The Epic of Gilgamesh.

Floods occur in the myths of most cultures. The Ojibwe First Nations people in North America speak of The Great Serpent and the Great Flood; the story of Manu and Matsya is a Hindu flood myth; and the Welsh tale of Dwyvan and Dwyvach is an analogue for the son of Prometheus in Ancient Greek mythology, Deucalion, who survives the flood by building a large chest upon which to float.

In most of these stories, the flood is the wrath of the gods (or god) on a hedonistic or godless community, though the "good" are saved. Zeus sends a flood to punish the arrogant Pelasgians; Noah is commanded to build the ark; and Lord Vishnu, disguised as the fish-like Matsya, warns the good-hearted mortal Manu of the coming waters. Our modern preoccupations with rising seas map directly onto these stories, as we assign fault for the global warming that is melting ice caps and inching the ocean up the shore.

An ocean of loneliness

Apocalyptic narratives have abounded for centuries, but JG Ballard's "The Drowned World" was one of the first to offer a modern interpretation of a planet beset by rising seas. Set in 2145, the influence of the 1962 novel on contemporary fiction set in a deluged future is unmistakable. Ballard imagines a balmy London that's mostly submerged, infested with giant alligators and traversed by mercenary scuba divers who plunder the city's museums and cathedrals.

"The Drowned World" explores the effects of human isolation, as London is emptied of all but a few die-hard survivors, soldiers and scavengers. As separate islands, the characters wallow in the loneliness that so many of us have become used to during lockdown. Not only does the sea-level rise destroy coastal cities, it also limits emotional connections between the remnant populations. With most common ground inaccessible, Ballard projects a lonelier, more violent, world.

Kim Stanley Robinson's 2017 novel "New York 2140" precedes Ballard's setting by five years, but apart from depicting cities under water, the two imagined worlds couldn't be more different. "New York is underwater but it's better than ever," reads one review.

Robinson moves between first and third-person narration, with several sections given over to an omniscient urban historian narrator known as "the city" or "that city smartass." These sections describe changes in the Hudson Bay area over the last millennium, from its pre-colonisation days, through the 2008 crash, the rising seas and global disasters to the "present" day of the flooded near-future.

This deep-time perspective suggests that individual action for environmental repair is both futile and absolutely necessary as a form of reparation. This is the contradiction of optimistic pessimism common to speculative fiction. The individual must take political action against climate disaster, or face a drowned world alone, as Ballard's anti-hero Kerans is doomed to.

Robinson's heroes are Charlotte and Inspector Gen, two middle-aged women working in refugee resettlement and policing, respectively. They live in the same cooperative housing project in Madison Square Park as Franklin, a young futures trader manipulating water commodities. His shark-like approach to trading is altered by his community-minded neighbours, who motivate him to rebel. For Robinson, individuals can only overcome if they organise.

And overcoming the rising seas will mean more than adjusting to flooded coasts. Some works of fiction consider how a rise in sea level will limit food production, as in Paolo Bacigalupi's "The Windup Girl." Others depict the consequences of mass migration to the remaining habitable parts of the planet, as in EJ Swift's "The Osiris Project."

These stories explore a sea-level rise as an existential threat to human life that's exacerbated by the paralysis and inaction of individuals. Recent offerings of climate fiction, such as Robinson's "New York 2140" or "The Ministry for the Future" go further, and operate at the level of utopian imagination implicit in Ballard's earlier dystopian vision, asking: what if we do something about it?