Expulsion is the only remedy: Insurrectionists in Congress must be rooted out

Republicans in Congress have doubled down on Trump's attempted coup. If we tolerate that, it will happen again 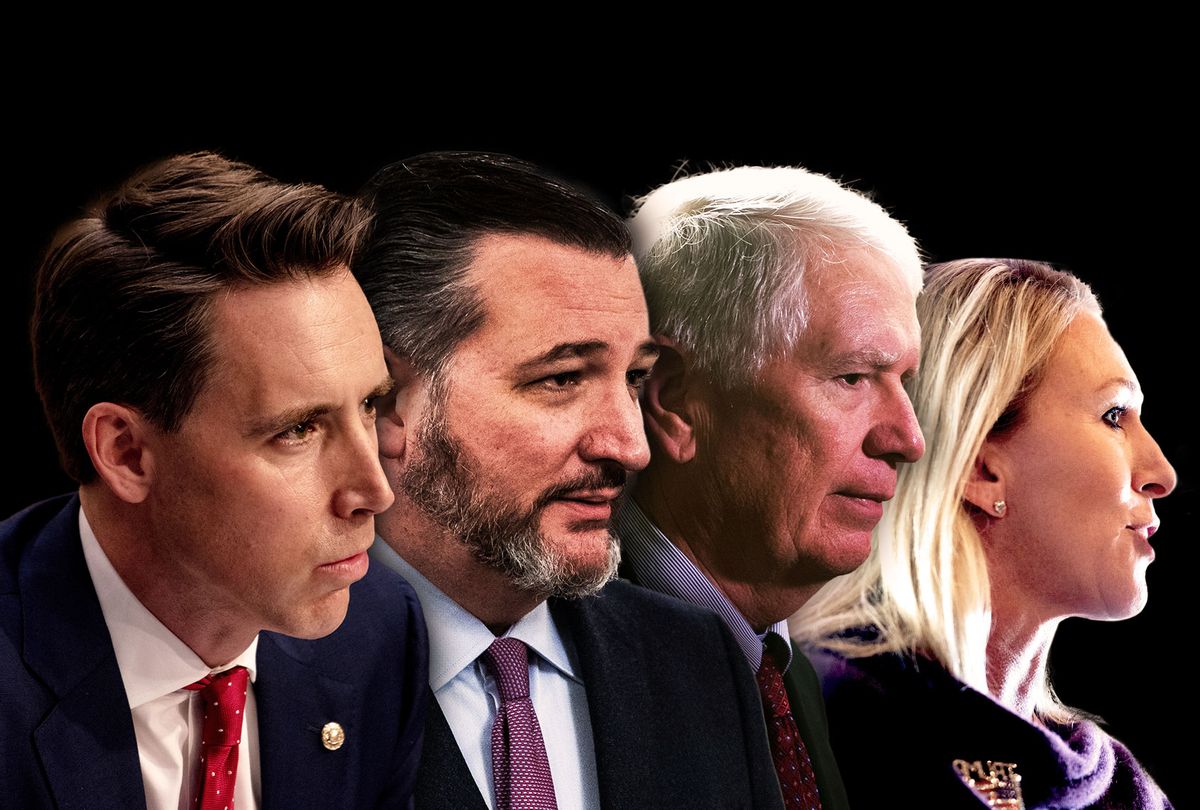 These were the words of then-President Donald Trump as he addressed a large, hostile crowd in front of the White House on Jan. 6, 2021.

It has now been more than a month since Trump and his congressional allies incited and supported the insurrection against our country's democracy. It was an attempt by a mob of violent seditionists to attack the Capitol and stop Congress from affirming the Electoral College victory of Joe Biden. This was planned and orchestrated by the sitting president with the hope that he could remain in power against the will of the people. Five people died. Dozens of police officers were injured. Vice President Mike Pence and Speaker of the House Nancy Pelosi were in grave danger of being seized and murdered. It was an unimaginable and indescribable scene of terror. Many of the insurrectionists had tactical gear and communications equipment. They roamed the halls with zip ties hunting for Pence and Pelosi. They built gallows and chanted death threats. They beat a police officer with a pole bearing the U.S. flag.  And let us not forget that President Trump chose not to intervene when the violence began. With the resources at his disposal, he easily and rapidly could have.

Never in our 245-year history has our democracy been actively sabotaged by a sitting president and his congressional sycophants. The events of Jan. 6, 2021 will be highlighted in all history books going forward. The insurrection of our election will never be forgotten. Its significance is on par with Sept. 11, 2001, and Dec. 7, 1941 (Pearl Harbor Day).

Donald Trump was quickly impeached — for the second time — for his incitement of this insurrection. At this writing, he is about to stand trial in the Senate. He is refusing to testify. Trump's behavior in the insurrection is easily explained by his psychopathic personality and his unrelenting desire to remain in power, despite losing both the popular vote (for a second time) and the Electoral College vote. Those of us who are mental health professionals predicted his pathological and violent response to his election defeat. No one should be surprised by the depth of his crass, repugnant and anti-democratic behavior. After all, everything is about Trump — the welfare of the country and its people be damned.

The Republican Party has been complicit with Trump for four years and counting. It has enabledhis quest to obtain absolute authority, politicize the Justice Department in his behalf, grift the American people and break norms, rules and laws with impunity. Republicans have been walking side-by-side with Trump every step of the way during his march to transform democracy into his own brand of authoritarianism. The insurrection was to be Trump's final accomplishment in his mission. He failed — but it was a close call. It was a bungled coup attempt that matched the ineptness of his past four years in office. A more intelligent and capable man might have pulled it off.

It is unlikely that Republican senators will have the insight and courage to convict Trump during his impeachment trial. Their complicity will continue. Their support of Trump's insurrection is crystal clear. They have tried to distract us by saying we must "move on."  They want us to deny the objective reality of their full-throated endorsement of Trump's self-serving conspiracy theories that the election was stolen from him.

Congressional Republicans who supported Trump's overthrow of the democratic election must be rooted out. On the morning of the Capitol attack, Rep. Lauren Boebert of Colorado tweeted, "Today is 1776."

Some congressional Republicans had reportedly given tours to the insurrectionists on Jan. 5. Eight Senators and 139 representatives supported at least one objection to the already-certified Electoral College vote. They promulgated false and fake conspiracy theories about how the election had been stolen from Trump, and cast their votes to support an authoritarian president who wanted to remain in power in defiance of the Constitution. Their entire scenario was a lie — the Big Lie — but they maintained their allegiance to their cult leader even though an insurrection against our government had occurred just the day before.

Sen. Ted Cruz supported the insurrection and actually engaged in fundraising during it. At least three newspapers in Texas have called for his resignation. Sen. Josh Hawley was in full support of Trump's efforts to remain in power despite the will of the people. He cheered on the mob attackers with the now indelible image of his raised clenched fist. Newspapers in Missouri are calling for his resignation. House Minority Leader Kevin McCarthy has talked out of both sides of his mouth about Trump's role in the insurrection, and has refused to disavow the dangerous conspiracy theories about a stolen election. Sen. Lindsey Graham has voiced his disapproval of the impeachment of Trump for the insurrection. Sen. Ron Johnson is blaming Pelosi for the mob's actions. Rep. Matt Gaetz traveled to Wyoming to rile up supporters to punish Rep. Liz Cheney, the Republican House whip, because she supported Trump's impeachment. Sen. Tommy Tuberville, a newcomer to Congress, has been an outspoken supporter of Trump's efforts to remain in power. Rep. Mo Brooks has gone on the record to support Trump and his fake conspiracy theories about the election. The list goes on and on. But Congress, the media and historians need to do what has been started here: List the seditionists by name and call out their treachery.

Since the Jan. 6 insurrection, the Republican Party has degenerated and gravitated to the fringe of the extremists, showcased by Rep. Marjorie Taylor Greene and others. Their support of Trump is stronger and more irrational than ever — despite the fact that he has been defeated and disgraced.

There are some reasonable Republicans who have spoken out against Trump and the insurrectionists. Sens. Mitt Romney, Ben Sasse and Lisa Murkowski have led the way, yet their words have been drowned out by the loud voices of the Q party who are doubling down on their blatant lies and conspiracy theories.

We have just witnessed an attempted coup against our democratic election. If the insurrectionists had been successful, Donald Trump would still be in high office and our democracy would be in shambles. We would no longer have open and free elections. We would no longer have three branches of government, the rule of law and a free press. Lies, conspiracy theories, violence and authoritarianism would prevail. Our country would be transformed into the psychopathic image of Donald Trump.

Accountability must be our mantra as we try to recover from the trauma of Jan. 6. Sticking our collective heads in the sand will not help us maintain and renew our democratic experiment. Reprimand and censure are far too weak for the offenses at hand. An attempted overthrow of our democracy requires nothing short of expulsion. There is no more egregious and reprehensible offense an elected official can commit.

It is time for us to clean house of all seditionists and traitors. We cannot allow them to remain in the sacred halls of Congress. They are a cancer that has metastasized. They are anti-democratic and anti-American outliers. Their voices and their influence must be stamped out decisively.

Please remember that not one of these congressional Republicans has shown an ounce of regret or shame for their actions on or before Jan. 6. Not one has apologized to the American people. If anything, they have fortified their position and their resolve. They continue to support Donald Trump and his abortive insurrection. They have not learned a thing. This is a collective lack of conscience shown by a large group of seditionists.

They leave us no choice: The only way to save our democracy is through expulsion, banishment and lasting shame.