Our failing healthcare system costs us countless lives. It’s time to adopt Medicare for All 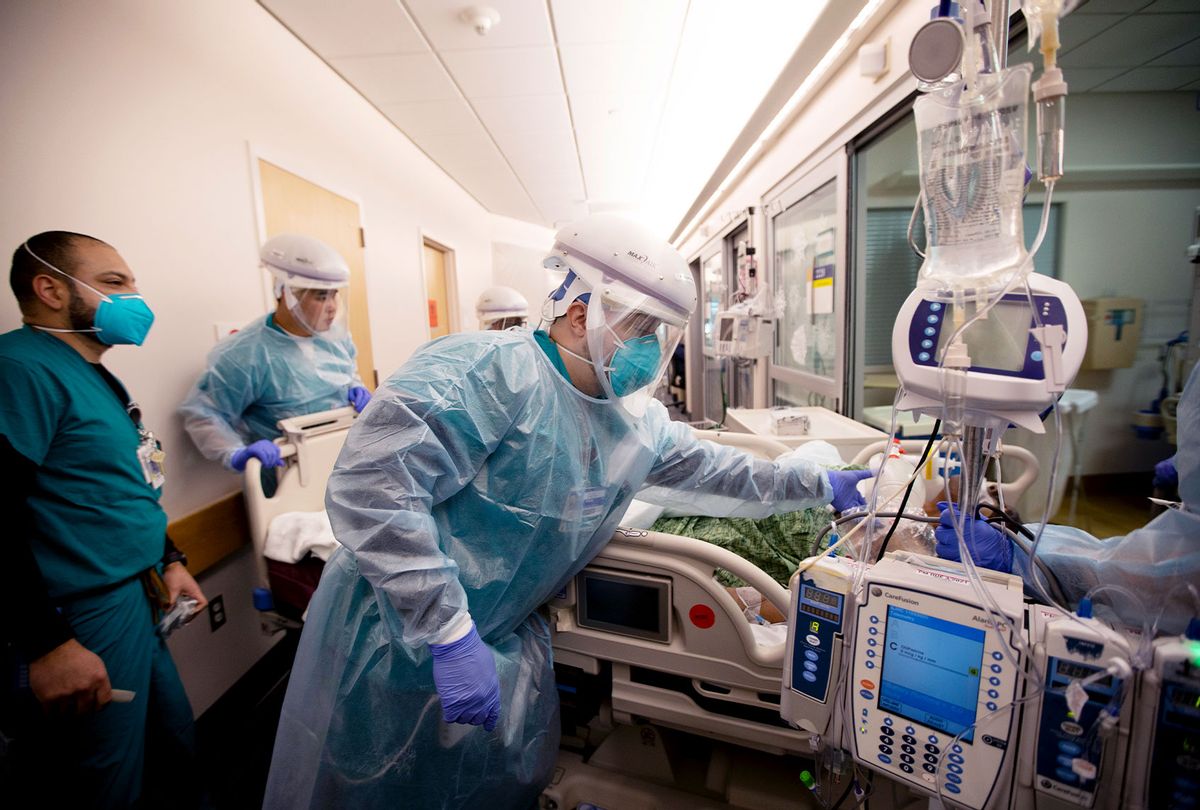 A patient surved a code blue and then was rushed to ICU to be intubated and be placed on a ventalator inside Providence Saint John's Health Center on Tuesday, Dec. 15, 2020 in Santa Monica, CA. They have expanded their ICU capacity. They are not currently over capacity at the moment. They have had 19 covid positive cases and they have 23 beds at this moment. The numbers are constantly is shiflting. (Francine Orr / Los Angeles Times via Getty Images)
--

Over the past year, COVID-19 has inundated the ICU where I work. Death and suffering have become the everyday norm. But I've also seen how our broken health care system amplifies the catastrophes caused by the virus.

Last spring, one of my many gravely ill patients who required intubation, and who had to be put in a drug-induced coma while the ventilator breathed for her, turned the corner after many weeks. After the breathing tube was removed, her first words expressed panic – not about the constant din of alarms from cardiac and respiratory monitors or the critical illness that she had narrowly survived — but for fear of ruinous medical bills.

She's not alone. One in 10 respondents to a Gallup survey in April said they'd avoid treatment if they thought they had COVID-19 because they feared the medical costs. Even before the pandemic, 30 million people were uninsured, 1 in 3 Americans struggled to pay medical bills, and illness and medical bills contributed to more than half a million personal bankruptcies annually.

As our nation recovers from the horrifying second peak of COVID-19, and as it grapples with the most severe economic downturn since the Great Depression, it's time to eliminate the scourge of inadequate health coverage – forever. It's time to adopt Medicare for All.

Today, in the medical journal The Lancet, I joined colleagues in providing the first comprehensive assessment of the Trump administration's impact on health, including in health care financing. We also make recommendations for action.

As we document, health protections dwindled under President Donald Trump. Cuts to the Affordable Care Act's navigator and outreach programs, the growing red tape in Medicaid, and the administration's xenophobic "public charge" rule that frightened immigrants away from enrollment in nutrition and health programs caused the number of uninsured to swell by 2.3 million, including 700,000 children – and that's before the virus struck.

When the pandemic hit, Congress moved to cover the costs of COVID-19 testing, treatment and vaccination for those without coverage. Yet some uninsured patients with COVID-19 have still received large bills. And many – including those with coverage – continue to face financial disaster from deductibles and copayments for non-COVID-19 illness.

Meanwhile, gaps in coverage are growing. Millions of Americans have lost their jobs, and with it, their private health coverage. Many more have suffered income losses that will make copays and deductibles even more onerous.

Make no mistake: Study after study has found that lack of health coverage is often fatal. Each year, tens of thousands of Americans die because they're uninsured and don't get vital care.

But it's not just the uninsured who suffer; cost barriers of any kind are medically hazardous. Deductibles cause women with breast cancer to delay starting chemotherapy by 6 months or more. Insured heart attack victims who fear the costs delay going to the ER – a potentially fatal mistake. For heart attack survivors, copays and deductibles for medications increase the risk of future heart problems. High insulin prices kill young people unable to afford that life-saving medication. And many patients with asthma and emphysema suffer unnecessary exacerbations and hospitalization because they can't afford routine medications and care.

As we show in our wide-ranging Lancet report, most deficiencies in our health care system predated Trump.  His actions made those deficiencies more acute, however.

It's therefore not enough to undo Trump's legacy. We need to go further.

Urgent action to cover health care costs – including copayments and deductibles – for everyone is essential. Legislation introduced last year by Sen. Bernie Sanders (I-Vt.) and Rep. Pramila Jayapal (D-Wash.), the Health Care Emergency Guarantee Act, would cover medical costs for the uninsured, as well as copays and deductibles for those with insurance, for the duration of the pandemic.

But a permanent solution – a Medicare for All reform – is needed in the pandemic's wake.

Medicare for All would provide all Americans with comprehensive first-dollar coverage. It would improve health and save lives, even as it would save money. A recent analysis from the Congressional Budget Office estimated that such reform could reduce overall health spending by at least $42 billion each year; the $400 billion in annual savings from cutting out private insurer's waste would more than pay for the costs of expanding and improving coverage.

The COVID-19 pandemic will, fortunately, end. But the ongoing suffering caused by our broken health care financing system will not – unless we take action. Nobody should ever awaken fearing medical bills, much less from a coma. The prescription is clear: Medicare for All.