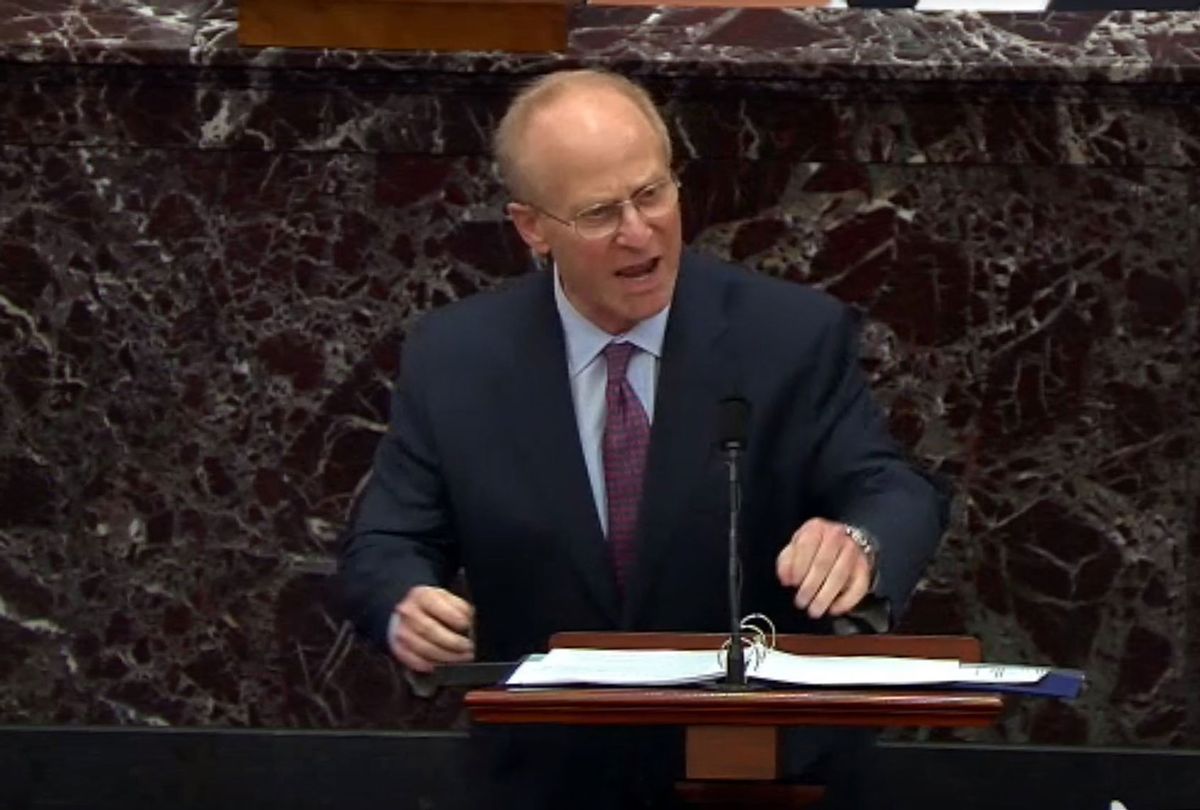 David Schoen, defense lawyer for former President Donald Trump speaks on the first day of former President Donald Trump's second impeachment trial at the U.S. Capitol on February 9, 2021 in Washington, DC. House impeachment managers will make the case that Trump was “singularly responsible” for the January 6th attack at the U.S. Capitol and he should be convicted and barred from ever holding public office again. (congress.gov via Getty Images)
--

Going into Friday, the fourth day of Donald Trump's second impeachment trial, Trump's legal team announced that their defense would be short. In one sense, that was an understatement.

While the House managers who prosecuted Trump took nearly all of their 16-hour allotment to present evidence and carefully lay out a convincing case for Trump's guilt in inciting an insurrection on Jan. 6, Trump's lawyers wrapped their defense in less than half of that time. However, in proof of time's curious relativity, the defense arguments felt many times as long as those offered by the House managers on Wednesday and Thursday. Low on reason or evidence and high on whining, every moment Trump's lawyers spoke felt like an eternity — at least for viewers who don't share the right-wing enthusiasm for Fox News-style self-pity and bad faith.

The contrast between the House managers and Trump's defense team was starkest during Friday's closing arguments.

House managers were there to persuade; laying out the evidence, connecting the facts together in a rational manner, and building their case — which they did quite successfully — that Trump's actions prior to and during the riot proved that he intentionally incited the insurrection.

Trump's legal team, however, was there to rationalize.

Specifically, their goal was to give Senate Republicans some talking points to hide behind when justifying their indefensible but inevitable vote to acquit Trump, despite the overwhelming evidence of his guilt. Several Republicans sitting in judgment of Trump met with his lawyers both before and during Friday's arguments. "What I encouraged the Trump lawyers to do is take their standard and apply it to the conduct of Democrats," Sen. Ted Cruz, R-Tx., revealed on his podcast. That advice helps with the secondary goal to produce footage for Fox News and social media — giving defensive Trump voters something to say when arguing with their kids.

As such, there was little effort to make a coherent argument, much less a persuasive one. Instead, Trump attorney Michael van der Veen set the tone right away with a speech that was less legal argument and more a litany of right-wing grievances: "Cancel culture", "Russia" and, of course, whining endlessly about property destruction during Black Lives Matter protests which existed far more in the conservative imagination than in real life.

Nothing Trump's lawyers said refuted the central claim established with a great deal of evidence by the House managers, which is that Trump incited an insurrection by feeding his base lies about a stolen election for months, which culminated in a riot after promised they're "allowed" to follow "very different rules." And little surprise, as Trump's guilt is irrefutable.

So Trump's team primarily relied on whataboutism. They even played a supercut of Democrats using the word "fight," equating what was clearly a metaphorical use of the word to Trump's exhortations to "fight" that his followers took literally, in the spirit that they were intended.

The claim that Trump's language was mere "ordinary political rhetoric" depends heavily, as most conservative arguments do these days, on the speaker deliberately pretending to be incredibly stupid. In this bad faith case, pretending to be too dumb to understand that words derive their meaning from context. As such, equating Trump's use of "fight" in the context of a violent insurrection with Democrats using it in much different contexts got real dumb, real fast.

I can't believe Chuck Schumer incited violence against Covid like this pic.twitter.com/npT53XnKVz

It's infuriating, but of course, infuriating liberals with obnoxious bad faith is part of the game being played by Trump's lawyers. It refocuses Republican minds away from concerns like the depravity of backing a violent sadist like Trump and towards more entertaining goals, such as trolling the liberals. And so long as they're thinking happy thoughts about triggered liberals, they aren't thinking about how scary it was to face a murderous mob looking for congressmen to kill.

While Trump's lawyers claimed to be defending his innocence, they no more meant that that Trump meant "peacefully" when he sicced a mob on the Capitol. Instead, as Paul Waldman argued in the Washington Post, "Faced with questions, criticisms or even legal jeopardy, Trump often defaulted to claim that his words and actions were defensible not because they adhered to any standard that could be generally applied, but because everyone else is just as debased as he is."

This is not the kind of argument meant to establish innocence. It's about rationalizing bad actions through deflection. And even if someone can conclusively prove the equivalence is false — as is easy to do, since not a single Democrat has ever sent a violent mob to storm the Capitol — whataboutism gets the job done by diverting a discussion of Trump's actions towards a pointless and bad faith debate over what the word "fight" means and if it means the exact same thing in every single context.

Trump's team was not worried about logic or reason, but about giving whoever needs it — from Senate Republicans to your Trump-voting uncle — a wall of words they can use to drown out those who are making sense. These days, Republican discourse is rarely, if ever, about explicating a belief system, so much as concealing it through the heavy application of bullshit.

And no wonder. Trump's reasons for inciting an insurrection are indefensible, as are the reasons for Senate Republicans in shielding him from consequences. In both cases, it's about a belief that Republicans should not be accountable to voters and Republican power should not be dependent on the will of the governed. That level of entitlement collapses in the face of any kind of reasoned debate. So reasoned debate is what Republicans will go to any length to avoid. Which is how we got the clown show masquerading as a legal defense in the Senate on Friday.