How Chinese infrastructure is reshaping the planet

China’s massive One Belt One Road project is being touted as a modern Silk Road. Is America’s global hegemony over? 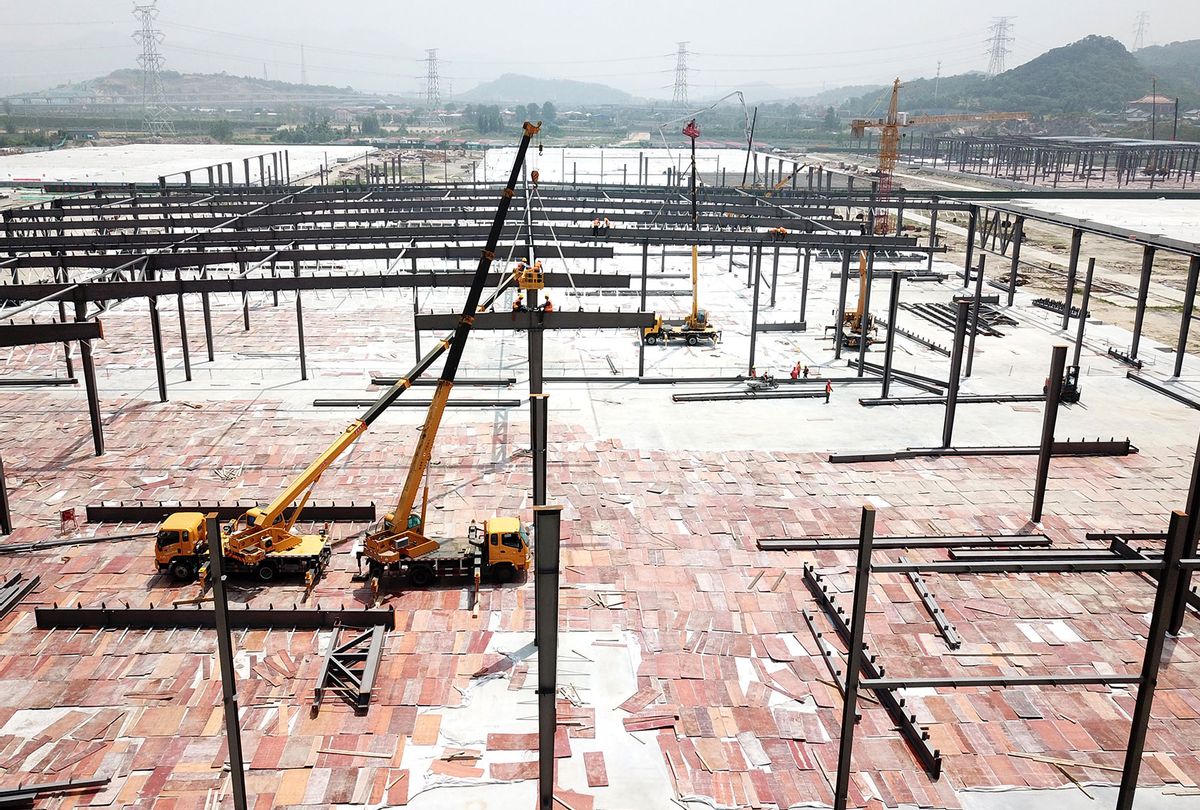 The Belt and Road Initiative supply chain base is in construction on 08th June, 2020 in Lianyungang, Jiangsu, China. (TPG/Getty Images)
--

Chinese President Xi Jinping has staked his legacy on the One Belt One Road initiative (OBOR), a sweeping plan to rebuild the ancient Silk Road through billions of dollars of investment in modern infrastructure across the planet built in China's name.  These sweeping construction projects include a mega-port in Sri Lanka, an oil refinery at the mouth of the Panama Canal, a cloud computing center in Malaysia, and a uranium mine in Greenland. But few Western observers have realized that Xi's legacy project is about something much bigger than construction projects.

One Belt One Road (OBOR) is about using economic means for political ends. Its aim: restore the lost glory of the Chinese empire, which dominated East and Central Asia for nearly two thousand years until its humiliating defeat in the Opium Wars of the mid-19th century. Its strategy: get foreigners from far and wide to pay tribute to China's greatness in exchange for Chinese money and technology, as they supposedly did for centuries under the imperial tributary system. Its primary beneficiary: Xi himself, who is securing his place alongside the most revered emperors in Chinese history.

To pitch Xi's project to the Chinese people, Communist Party propagandists have rewritten the history textbooks and bolstered their claims with glitzy TV documentaries. This is not tedious academic debate; it is the first sketch of a Chinese-dominated world order that has no equivalent in American, European, or even Soviet history. This "model" is supposedly rooted in Chinese history—but it shows little interest in factual accuracy.

OBOR's revisionist history of the world reveals what the Communist Party really means by the slogan "great rejuvenation of the Chinese people" (Zhongguo da weida fuxing). Xi doesn't want to start foreign wars or "export the revolution" as Mao did. But he does think—as I show in my new book—that China can become the world's most powerful country without firing a shot. By leveraging its money, technology, and political power, it can make foreigners submit of their own free will.

Making the past serve the present

The Chinese Communist Party has long used history education for ideological indoctrination and mass mobilization. In 1964, Mao Zedong wrote that intellectuals should seek to "make the past serve the present—and to make the foreign serve China." Soon after the Tiananmen Square uprising in 1989, China's National Education Commission announced in a major report that it would treat history education as "a national strategy" to "defend against the 'peaceful evolution plot' of international hostile powers." It set up "patriotic education bases" across the country, renovating historic sites to memorialize China's "century of humiliation" by colonial powers. The propagandists also goosed up the lessons about the communist takeover of China in the national history curriculum, making it even more glorious and triumphant. These changes were integrated into the national university entrance exam, the gaokao, so that any secondary school student in China who wanted to go on to university would have to demonstrate mastery.

Xi has continued these efforts, but his propaganda team has grown even more flagrant about rewriting basic facts. To persuade the public that OBOR is worthwhile, they have created a suitably glorious origin myth for the ancient Silk Road and identified Xi Jinping's own historical avatar: the Han dynasty emperor Wudi. These historical narratives illuminate the government's often vague policy pronouncements about OBOR itself. They are a coded message to the Chinese people about what the new national strategy is really all about.

Before Xi Jinping, Chinese students learned that the Silk Road didn't begin to take shape until the late first century A.D., after the Han dynasty had annexed the vast Central Asian lands that compose modern-day Xinjiang province. The Xiongnu, a nomadic people from Central Asia, were the region's dominant power. To win the hearts and minds of the local peoples, Chinese had to show that they could keep them safe against the Xiongnu threat. And so the Chinese did—through beheadings and military shock-and-awe.

In the old textbooks, the Silk Road didn't have a "founder." It wasn't even a "road." The term "Silk Road" (sizhouzhilu) was used loosely, as a metaphor for the trade links that emerged in the centuries after Central Asia had been pacified. The idea that the Silk Road was a Chinese-initiated political project was a fiction concocted in the 1930s by Sven Hedin, a Swedish adventurer who wanted to improve relations between China and the Third Reich. Chinese historians did not take Hedin seriously. The old textbook made this clear when it posed the discussion question: "How did the Silk Road form?" Only after Xi took power was the question rewritten: "who founded the Silk Road, and when?"

Wherever the historical facts didn't offer a analogy to Xi's OBOR scheme, the revised textbooks simply changed them. They moved back the "founding" of the Silk Road by nearly two centuries, attributing it explicitly to Emperor Han Wudi (r. 141 to 87 B.C.) Early in his reign, Han Wudi sent the explorer Zhang Qian on a journey to the "Western regions" of modern-day Central Asia. After imprisonment, escape, and many years among the barbarians, Zhang Qian returned to China with valuable political intelligence. The old textbooks mention Zhang Qian only in passing. The new ones elevate him to the position of national hero—the incarnation of a loyal subject who strives and suffers in the service of the emperor.

It is no small thing for a Chinese leader to compare himself to Han Wudi, the most venerated emperor in Chinese history. Over five decades, Han Wudi oversaw the doubling of the territorial holdings of the realm, a flowering of arts and culture, and a period of exceptional domestic stability and peace. Even to name Xi and Han Wudi in the same sentence is a stretch, let alone to depict Xi as the great restorer of Han Wudi's legacy.

The propagandists were not finished. They also had to invent a new backstory for the Maritime Silk Road (MSR), the second half of Xi's "One Belt One Road" concept, which had even weaker historical grounding. For most of Chinese history, the country had no far-seas navy or direct maritime contact with the Indian Ocean. The notable exception was the navigator Zheng He, who lived nearly 1,5000 years after Han Wudi's death. This was why the old textbooks scarcely mentioned the Maritime Silk Road (MSR) and explicitly stated that it formed spontaneously "after Han Emperor Wudi's time." That would not do, since Xi's MSR stretches all the way to Europe. So, the revised textbook said that the MSR was in fact founded by Han Wudi himself, and extended its western terminus from Sri Lanka all the way to Europe. (It does not explain how this was geographically possible before the construction of the Suez Canal in the 19th century.)

For over a millennium, the narrator intones, from Marco Polo through Christopher Columbus, Westerners thought of little else but securing greater access to Chinese products. This created a "Silk Road spirit," which kept relations between East and West harmonious and guaranteed China's place at the top of the global pecking order.

Then, the rise of the West and the industrial revolution happened. These are portrayed as unhappy accidents—the brief interlude in a history of the world in which China did not dominate. But the Western model ultimately collapsed on itself, devolving into colonial exploitation, inequality, and war. Thankfully, under Xi's enlightened rule, China is ready to restore the "Silk Road spirit" and draw the Western chapter of world history to a close.

The message for audiences today is clear. Han Wudi's ancient Silk Road made China rich and powerful—and, in the process, stripped the Xiongnu enemy of its allies and trading partners. Xi Jinping's new Silk Road will do much the same, restoring China's primacy at the expense of all others, including the United States. Once other countries truly recognize what Chinese technology and products have to offer, their loyalty to China will be assured. The Middle Kingdom will return to its rightful place at the center of a harmonious world order.

The "Silk Road," in other words, is a euphemism for the tributary system, the diplomatic practice that the Ming and early Qing dynasties used for centuries to govern East Asia. Tributary states sent semi-regular missions to the Chinese imperial court to acknowledge the superiority of the Chinese emperor and perform rituals of submission, known as the kowtow. In return, the emperor granted them trading privileges and military and diplomatic perks. At various points over the centuries, China's tributary states included the rulers of much of modern-day Malaysia, Indonesia, Vietnam, Thailand and Korea, Tibet, and (for a brief period) Japan.

Much like the Silk Road, the tributary system is a simplified catch-all concept for informal diplomatic procedures and interactions over many centuries. Western historians continue to debate the finer points. But inside China, everyone knows what the tributary system (cefeng) means. A 2005 Chinese high school textbook defined it thus: "The tributary system occupied an important position" in China's economic relations with the outside world. "The money paid by Chinese buyers to the foreign sellers was always several times higher than the offered price. Its purpose was not to obtain maximum economic benefits, but to promote state power and strengthen ties with foreign countries."

One can hardly think of a better encapsulation of what China is selling through One Belt One Road.

Xi's plan to "rebuild" the ancient Silk Road entails the construction of a lot of infrastructure, but it's really a political project to restore a Chinese world order. Looking closely at the propaganda, one gets the sense that Xi's China is a country hungry for status and power, but averse to territorial expansion and war. Xi wants to be both a visionary reformer who will secure the "great rejuvenation of the Chinese people," and a virtuous traditionalist who venerates China's cultural heritage and studies the lessons of his imperial predecessors.

Most Americans—and indeed most concerned citizens in Europe, Japan, and elsewhere—would find the prospect of becoming a Chinese vassal state repulsive. But it is not clear that every country agrees. To date, over 100 countries have signed non-binding agreements to cooperate with One Belt One Road. Do none of them have the slightest inkling of what Xi is up to? Even if they are hazy about the final details, surely the main ideas are clear enough. Countries on every continent, from the Philippines to the United Arab Emirates, from Kenya to Ecuador, have been happy to parrot Xi's preferred phrases about "win-win cooperation" and the historical legacy of the "Silk Road." Dozens of heads of state attend the biannual Belt and Road Forums in Beijing to pay tribute to China's contributions. Clearly, they seem to have concluded, these symbolic signals are a reasonable price to pay for Chinese loans, investments, technology transfers, and political support.

If the United States and its allies want to avoid being pulled into this Chinese-led tributary order, they must learn to compete more effectively. We need sustained and disciplined diplomacy to persuade countries on the fence that they have more to gain from a liberal international order than a Chinese-led tributary one. But, first, the United States and its democratic allies need to reflect on themselves. China is being clear enough about the world order it wants to build. What are we offering as an alternative?

Eyck Freymann is the author of "One Belt One Road: Chinese Power Meets the World" (Harvard University Press, 2020) and a doctoral candidate at the University of Oxford.