"The insurrection was the culmination of a carefully orchestrated, monthslong plan to destroy democracy" 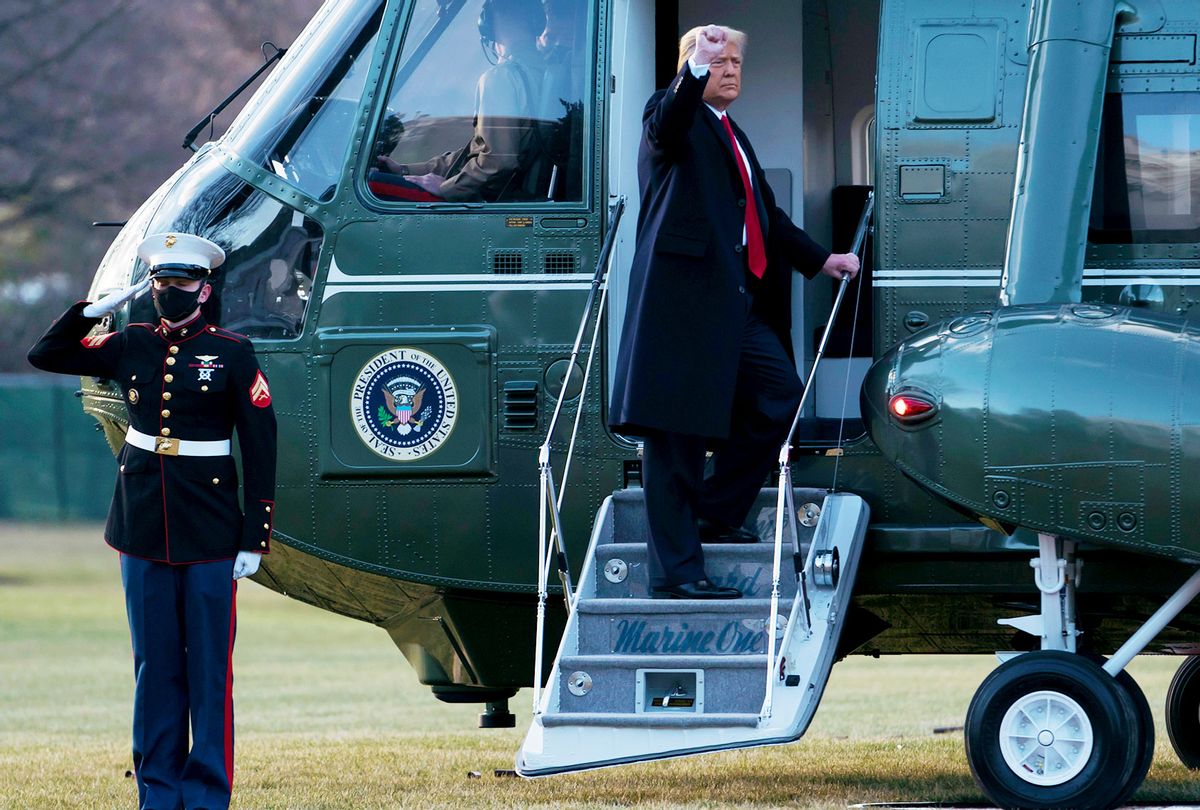 President Donald Trump and first lady Melania Trump board Marine One as they depart the White House on January 20, 2021 in Washington, DC. President Trump is making his scheduled departure from the White House for Florida, several hours ahead of the inauguration ceremony for his successor Joe Biden, making him the first president in more than 150 years to refuse to attend the inauguration. (Eric Thayer/Getty Images)
--

The suit (pdf)—filed by the civil rights group and the law firm of Cohen Milstein Sellers & Toll in the U.S. District Court for the District of Columbia—accuses Trump, Giuliani, the Proud Boys, and Oath Keepers of directly violating the Enforcement Act of 1871 by attempting to prevent Congress from performing its official duties on January 6.

The new suit alleges that "on and before January 6, 2021, the defendants... conspired to incite an assembled crowd to march upon and enter the Capitol of the United States for the common purpose of disrupting, by the use of force, intimidation, and threat, the approval by Congress of the count of votes cast by members of the Electoral College as required by Article II, Section 1 of the United States Constitution."

"In doing so," it states, "the defendants each intended to prevent, and ultimately delayed, members of Congress from discharging their duty commanded by the United States Constitution to approve the results of the Electoral College in order to elect the next president and vice president of the United States."

In addition to Thompson (D-Miss.)—who is chairman of the House Homeland Security Committee—other lawmakers including Reps. Hank Johnson (D-Ga.) and Bonnie Watson Coleman (D-N.J.) are expected to join the suit in the coming days, according to a NAACP statement.

"January 6th was one of the most shameful days in our country's history, and it was instigated by the president himself," Thompson said in a statement. "His gleeful support of violent white supremacists led to a breach of the Capitol that put my life, and that of my colleagues, in grave danger. It is by the slimmest of luck that the outcome was not deadlier."

"While the majority of Republicans in the Senate abdicated their responsibility to hold the president accountable, we must hold him accountable for the insurrection that he so blatantly planned," added Thompson. "Failure to do so will only invite this type of authoritarianism for the anti-democratic forces on the far right that are so intent on destroying our country."

Despite additional evidence underscoring Trump's failure to act to stop the assault on the Capitol—which left five people dead—only seven Republican senators voted on Saturday to convict the former president for inciting the attack. Trump was impeached by the House a historic second time on January 13.

"Donald Trump needs to be held accountable for deliberately inciting and colluding with white supremacists to stage a coup, in his continuing efforts to disenfranchise African-American voters," said NAACP president and CEO Derrick Johnson. "The insurrection was the culmination of a carefully orchestrated, monthslong plan to destroy democracy, to block the results of a fair and democratic election, and to disenfranchise hundreds of thousands of African-American voters who cast valid ballots."

Johnson added that the lawsuit was filed "to protect our democracy and make sure nothing like what happened on January 6th ever happens again."