In his first interview since leaving office, Donald Trump says "Rush is irreplaceable" 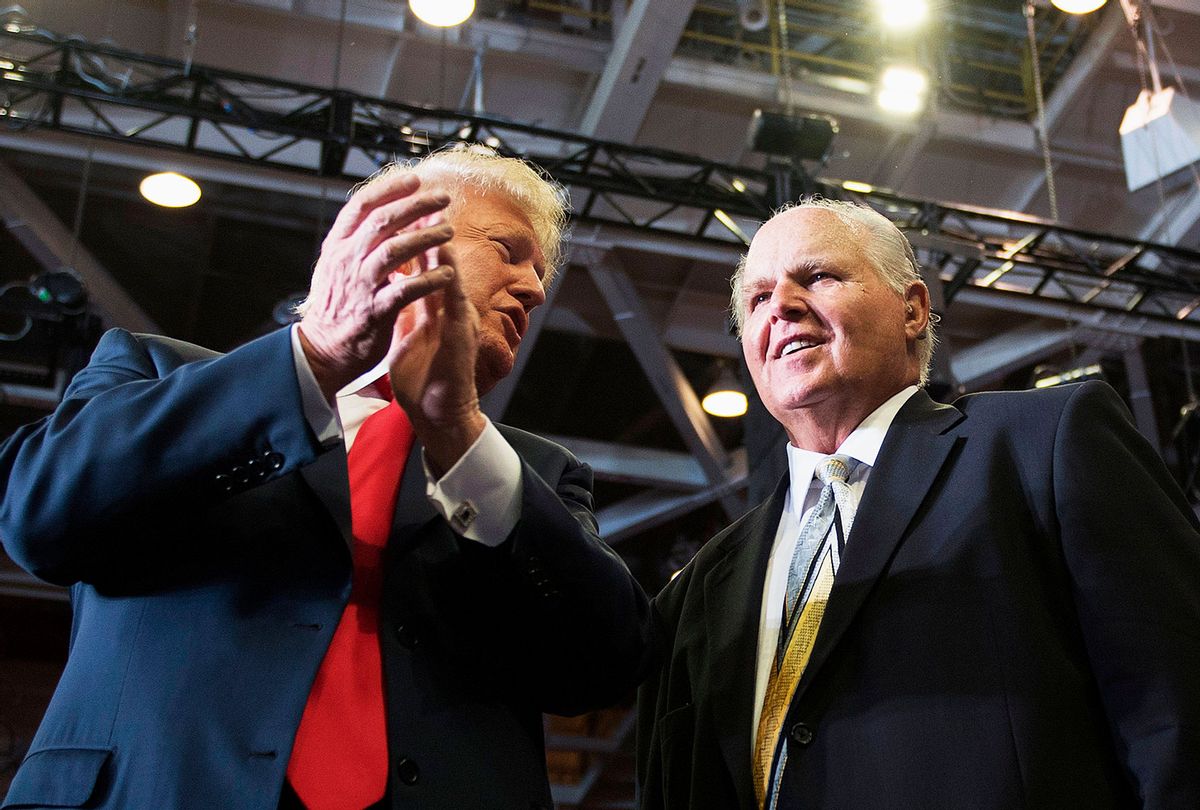 Rush Limbaugh, one of the earliest and most influential pioneers of conservative talk radio, passed away at age 70 following a lung cancer diagnosis. The self-proclaimed "Doctor of Democracy," who filled the airwaves with far-right claptrap, was once called "the voice and intellectual force of the Republican Party." After his death was made public on Wednesday, Donald Trump broke his post-presidency silence on cable news and called into Fox News to offer his public condolences.

Trump called into Fox News' "Outnumbered" to impart his praise for the radio host, hailing Limbaugh as a one-in-a-lifetime industry giant. "Rush is irreplaceable," Trump said. "Unique. He had an audience that was massive," adding, "People, whether they loved him or not, they respected him."

First syndicated in 1988, Limbaugh's dominance on talk radio spanned over three decades and peaked at an audience of about 15 million listeners.  Limbaugh offered a wellspring of far-right talking points that entrenched conservatives into a worldview of racism, sexism, homophobia, and conspiracy. Where many Republican politicians could only use a dog whistle, Limbaugh used a loudspeaker, inundating the airwaves with rhetoric that managed to target just about every single marginalized group in the U.S.

A full account of Limbaugh's lies and demagoguery would prove an insurmountable task but many instances certainly stand out.

In 2003, Limbaugh resigned from ESPN after commenting that NFL quarterback's success was overblown because it was "very desirous that a Black quarterback do well." The host once likened the NFL to "a game between the Bloods and the Crips without any weapons."

In another instance, while on a tirade about black civil rights activists, Limbaugh asked his audience, "Have you ever noticed how all composite pictures of wanted criminals resemble Jesse Jackson?" In 2016, the radio host read an essay that was penned by Sam Francis, one of the most influential race scientists in the past several decades.

Limbaugh was also a staunch opponent of LGBTQIA rights. The host demurred marriage equality as "perverted" and "depraved," and intimated that any deviations from heteronormativity might lead to bestiality. Limbaugh once said that "feminism was established so as to allow unattractive women easier access to the mainstream of society." He also called a college student a "slut" and a "prostitute" after she testified in Congress to fight for improving women's access to birth control.

Although Limbaugh positioned himself as a kind of self-styled everyman, standing up for the neglected working class of the American heartland, the host flaunted a remarkably lavish lifestyle, boasting a private jet, an arsenal of luxury cars, an $11.5 million New York apartment overlooking Central Park, and a net worth of $400 million. Limbaugh was also notorious for his broadsides against policies that would help the working class, like Obamacare. He staunchly opposed tax increases on the rich and routinely mythologized global warming as a liberal hoax.

During the pandemic Limbaugh downplayed the virus, comparing it to the common cold. "We have to remember that people die every day in America," he told his listeners. More recently, Limbaugh praised the violent mob of fascists that descended upon Capitol Hill, likening them to Revolutionary War patriots. "There's a lot of people calling for the end of violence," he said on his show. "There's a lot of conservatives, social media, who say that any violence or aggression at all is unacceptable. Regardless of the circumstances. I'm glad Sam Adams, Thomas Paine, the actual tea party guys, the men at Lexington and Concord didn't feel that way."

On Feb. 4, the former President awarded Limbaugh with the Presidential Medal of Freedom, an accolade that black activist Jesse Jackson had, in fact, been given in 2000.

Although Limbaugh's death was expected after a year-long battle with cancer, it nonetheless hit his followers hard.

"Saddened by news of the death of Rush Limbaugh, whose wit and wisdom comforted conservatives and confused leftists," Former Arkansas Gov. Mike Huckabee tweeted, "He loved God, America, and his audience. His impact on broadcasting will never be equaled."

Right-wing provocateur and radio host Ben Shapiro chimed in, "RIP Rush Limbaugh, the creator of talk radio and by extension the alternative media, an indispensable and iconic conservative voice."