Many Texas residents remain without running water, electricity, or heat as they wait for the storm to pass 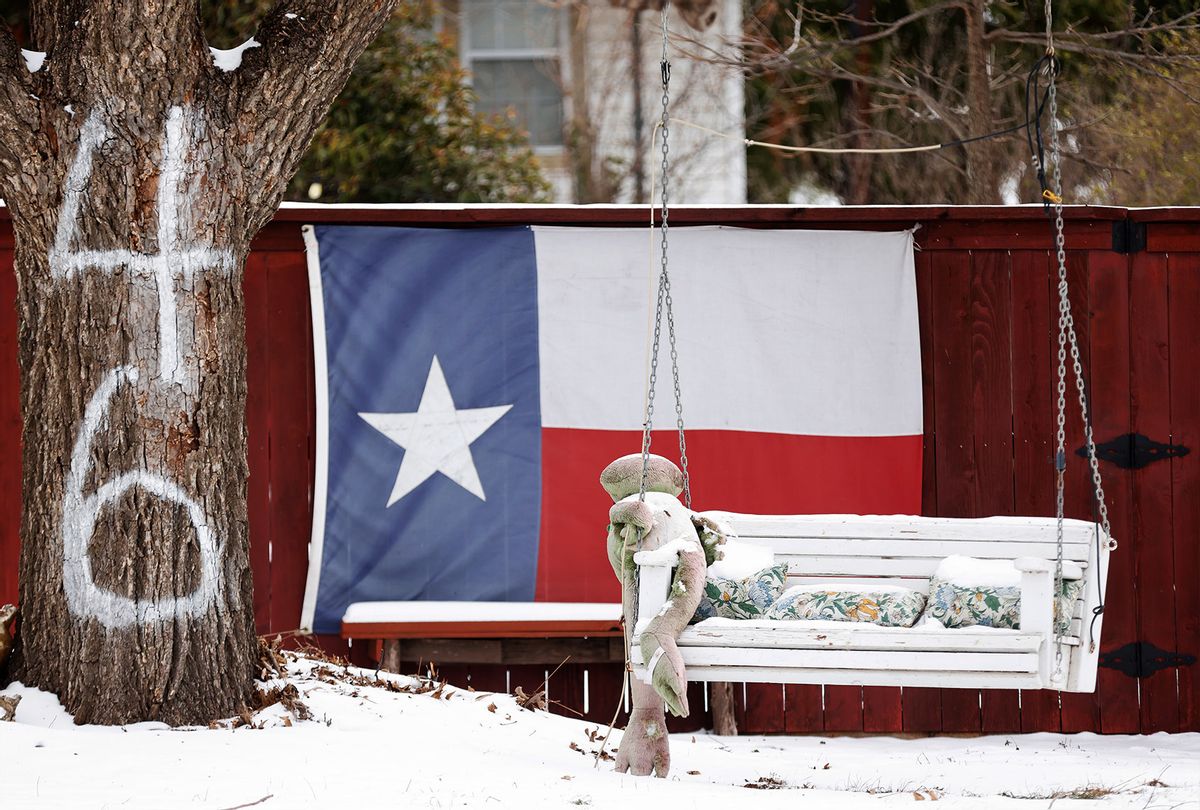 A swinging bench hangs from a tree after a snow storm on February 18, 2021 in Fort Worth, Texas. Winter storm Uri has brought historic cold weather and power outages to Texas. Residents have gone days without electricity and fresh water after a catastrophic failure of the power grid in the state. (Ron Jenkins/Getty Images)
--

Power outages in Texas typically come with 100-degree weather, humidity, or maybe even a tropical storm. When a mini ice age hit the Lone Star State early last week, its residents couldn't have imagined what they were in for. Texans were forewarned about the coming storm, but even before it hit, the infrastructure of the city and the added stress of Covid precautions left people ping-ponging around town to find supplies and grocery stores without crippling lines.

"I went and waited in line at two different grocery stores," Austin resident Chris Costenbader recalled. "I ultimately wasn't able to get into either of them. I didn't think it was that big of a deal at the time because we have enough stuff around the house, but there were some things that would have been nice to get." The lunchmeat and refrigerator items they did have froze overnight.

Firewood, too, was slim pickings.

"It was hovering around 30 to 34 degrees inside," said Costenbader, referring to the outside temperature nearing single digits on Monday night. "It was kind of jokingly brought up, but if we wanted to stay in our house like that, we would probably have tried to chop up an old bookcase or something."

Luckily his neighbors had a gas stove that they used to make hot food, like eggs and soup, to bring around to others who weren't as fortunate. The neighborhood also made sure to keep an eye out for two elderly gentlemen who live alone.

"You know, I would typically be the person that would go out and enjoy the snow and go explore," said Costenbader. "But you just had no way to warm back up once you got cold." At least six people experiencing homelessness died during last week's storm.

While many neighborhoods in Austin have since regained power, including those where Costenbader and Salon reporter Roger Sollenberger live, plumbing remains non-existent for many residents.

"We filled up our bath because we were on a boil notice," Sollenberger said late last week. "And I think that's going to extend until at least probably Sunday, I believe. It's, you know, people are pouring water into the toilet." Costenbader said that they too were melting snow in buckets in their living room.

There's still no clear plan in place to fix the problem.

"I was speaking to Mayor Adler yesterday," Sollenberger started. "And he told me that they would be getting water in but that there might be a food shortage. But the problem with the water is that they don't know why water pressure is so low.  And what they're worried about is that a bunch of pipes have ruptured and they have been able to locate them yet."

Pictures of ruptured pipes in Texas have been circulating around the news and social media for days, showing caved-in ceilings, downstairs flooding, and the destruction of countless homes.

"The hardest thing, I believe, is that we don't know what we're preparing for, and the state doesn't know that either," said Sollenberger. "Abbott was telling me that he has no idea what the next steps are like in the power grid; that Austin energy cannot get that information from the State because the state is so heavily deregulated with lots of independent competitors, that there's no real simple Compendium for public information like that. So Abbott, and Austin, is basically flying blind to this, too."

One person on Costenbader's street had a snow shovel, so the neighborhood took turns shoveling their driveways and helping push each other's cars onto the roads. The city of Austin doesn't have snow plows, so even if residents wanted to flee from the madness, it was likely impossible. But even commuting close to home, to and from the grocery store, may not be a successful trip.

"I heard that it could take weeks to really get everything back together because of the backup and the shortage and the demand," said Sollenberger about grocery store shortages in Austin. "It could take a long time to actually just get retail stuff back to normal."

Central Austin resident Laura Gorsky, whose tweet about the situation in Texas went viral, explained to Salon, "We just felt like we were abandoned."

She continued: "We were lucky that we had friends that live close by and that we were able to get fuel for our camping stove from them." They now plan to upgrade their sleeping bags and emergency packs in order to prepare for the impending climate crisis.