Everything you need to know about tangy, floral loquats

You’re met with an initial sour zip of lemon that gives way to a smooth, mango-like sweetness 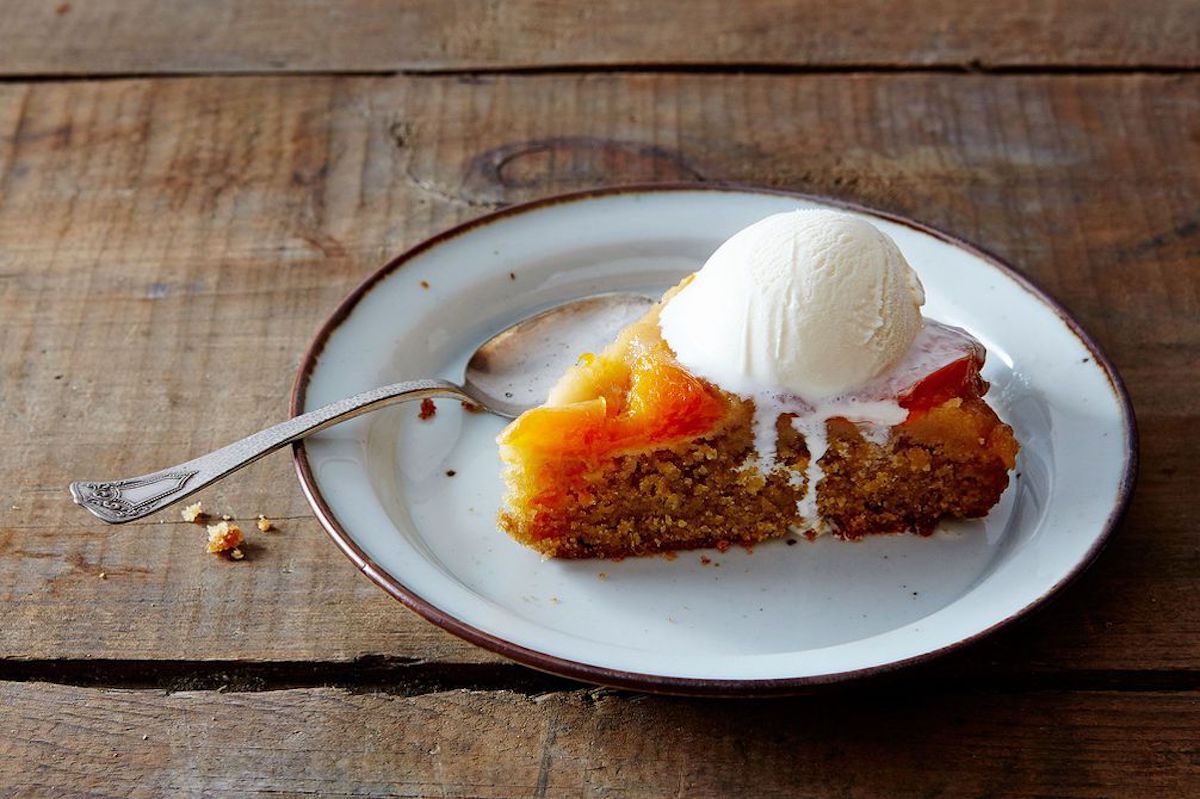 I have this thing for picking things off trees and eating them. The fruit calls to me. I can spot the first fig ripening on a tree or find a wee wild strawberry growing under a carpet of green.

So when I caught a glimmer of orange in a tree while biking around my hometown of Charleston, you're damn right I screeched to a halt right then and there to investigate.

Upon closer inspection, I found that each branch of the tree had dozens of clusters of ripening fruit, about the size of apricots, ranging in color from green to neon orange. After asking around I found out that these fruits, which I was now noticing on every street corner, backyard, and alleyway, were called loquats—and that's when my obsession began. 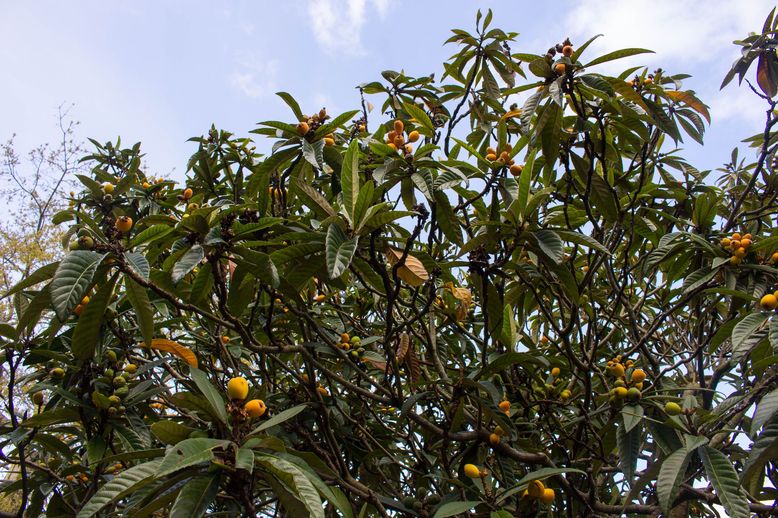 What exactly is a loquat?

According to the University of California Cooperative Extension, the loquat is "an ancient fruit, related to the apple [and] the quince," which explains its tart-sweet flavor. Native to China and Japan, the loquat has spread to many tropical and subtropical sections of the world. I can personally attest to their presence in South Carolina and Texas, where their tang is a welcome refresher from the hot, humid air. They're also apparently ubiquitous in Florida and Southern California.

The loquat is the platypus of the fruit world; it seems to combine familiar species into something completely new. It has smooth, semi-fuzzed skin of a plum and the inner texture of a grape. When you bite into one, you're met with an initial sour zip of lemon that gives way to a smooth, mango-like sweetness. Don't try one before they're squarely between orange and yellow on the color wheel or they'll be way too tart.

After sampling my first loquat, I began to brainstorm ways to use my newly-discovered foraged fruit in the kitchen. But when I started asking the internet, my friends, and strangers on the street what they did with their crop of loquats, I found surprisingly little information. 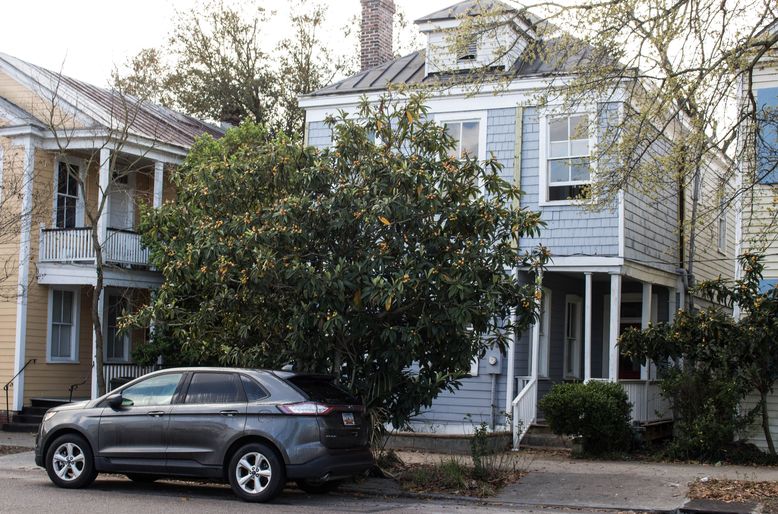 Besides finding a stray recipe for chutney or jelly, when I Googled "best loquat recipes," a tumbleweed essentially blew across my computer screen. People IRL seemed similarly stumped. While everyone I questioned said they liked eating loquats occasionally, hardly anyone seemed to cook with them. Though I did hear tell of someone baking them into a loquat chess pie and a local brewery adding them into their beer . . .

As I'm not really a pie person (cue gasps!), I decided to do to loquats what I always want to do to fruit — baked it into an upside down cake. Inspired by this rhubarb-y recipe from Kenzi Wilbur, I stewed the halved, de-seeded fruit with brown sugar and butter until they started to slump, poured the mixture into a pan, and topped it with big slumps of thick, buttermilk batter. 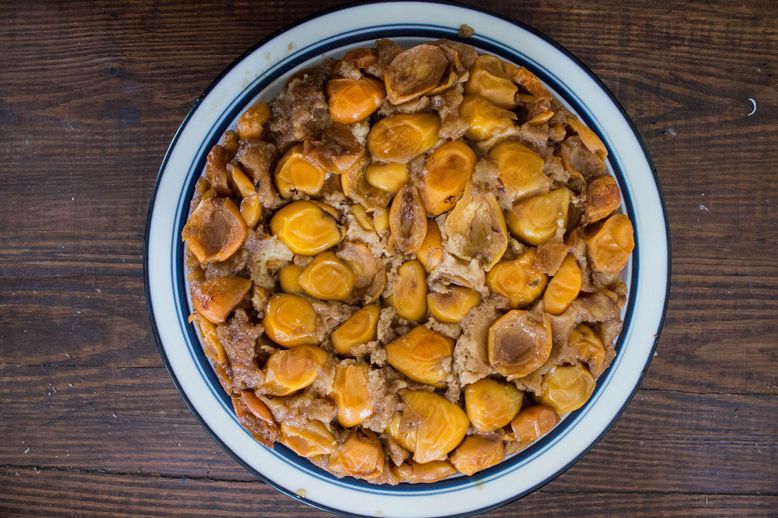 The result proved my theory that any fruit can — and should — be the star of an upside-down cake . . .

A couple things to keep in mind when cooking (or eating) loquats:

Additional ideas from the editors:

As author Catherine Lamb notes, the internet is not overflowing with ideas for this under-the-radar fruit. Loquat comes from the same family as stone fruit, apple, and pear, and quince, and can be used in similar ways as, (or in many cases, even directly swapped for) its fruity cousins. Lamb touches on her favorite way to cook with loquats, in an upside-down cake, but if you find yourself with an abundance of the fruit, here are a handful of ideas to use your bounty.

11 Ways To To Cook With Loquats

The most obvious use for loquats is to use them as you would another stone fruit: in dessert, whether it be a cake, tart, cobbler or crumble. Since they come from the same family as stone fruit, feel free to substitute them in your favorite summertime recipes.

Loquats bake beautifully into this simple, buttery cake. Always taste one before you start baking; this recipe works best when you adjust the sugar according to the fruits' natural sweetness. It's best served warm, with a big dollop of barely-sweetened whipped cream.

Since loquats come from the same family as apple and quince, it's a natural fit to utilize them in an iteration on the classic French tart. This is also a perfect way to cook with loquats that are not fully ripe yet, as their firmer texture will hold up better during baking and flipping.

Depending on how many you have, you can either substitute loquats for the apricots or peaches in this pie recipe, or mix all three together into a beautiful melange of a filling. When it doubt, pop nearly any fruit into a flaky pie crust with a buttery crumble topping and you're bound to end up with a winner.

Have a jam session

Loquats are high in both sugar and pectin, making them a perfect fruit for preserving, whether in the form of jam, compote, or marmalade. Making jam or compote is also a wonderful way to preserve the flavor of loquats until you're able to buy (or forage) them again.

Leave it to baking and general dessert expert Erin McDowell to uncover the easiest, most hands-off way to make jam at home. Her method for oven-roasting fruit yields delicious jam in under an hour with no babysitting the stove required. Try making loquat jam this way, or experiment with mixing in other stone fruits to make your own unique blends. Loquat pairs splendidly with apricots, peaches, cherries, and other stone fruits.

Tartines with ricotta and a quick apricot compote

Substituting loquats for apricots in this quick compote is seamless. Just taste the fruit before you cook and adjust the added honey for sweetness as needed. Once you have your loquat jam or compote, transform your usual toast into a decadent ricotta tartine. Inspired by a certain Los Angeles restaurant, I like to use thick cut brioche for this tartine, and always top mine with a general sprinkle of flaky salt.

One of my favorite ways to cook with stone fruit is to poach them. In this case, poaching loquats in a flavored sugar syrup renders the fruit still slightly firm but yielding and deeply infused with spices and sweetness. Use this article to poaching fruit to guide you through the process. I love to add whole spices like cinnamon sticks, star anise, or cardamom pods, but one of my favorite tips from this article is how to get creative with the poaching liquids themselves. Think beyond water; use steeped tea or a wine, red, white, or sweet, as a poaching liquid.

Take a note from this recipe for poached pears and try poaching loquats in spicy ginger beer. Pair with a lightly sweetened vanilla custard for an easy, elegant dessert.

This recipe is sophisticated, composed, and well balanced. Apricots (or in this case loquats) get poached in white wine with hints of fennel and black pepper before being served with lightly sweetened ricotta. While we usually add sweet to our savory dishes, this is a perfect example of adding savory elements to a dessert in a spectacular way.

Loquats also work beautifully in savory dishes. Their subtle sweetness and slightly citrusy flavor lends itself to dishes that embrace a balance of sweet and savory. Here are a few ideas to utilize the loquat in more than just dessert.

While curried potato-and-pea samosas are the headliner here, the loquat-onion chutney jam served on the side really steals the show. Loquats cook down with spices, chili, onion, and an acidic pang from apple cider vinegar. It's sweet and tangy and you'll want to put it on everything.

Speaking of, if you're tight on time or prefer to skip the samosas, just make the chutney on its own. It's flavorful in its own right and pairs perfectly with lamb, grilled or steamed fish, or tofu, or try it as a condiment to spice up your usual lunchtime turkey sandwich.

This Tagine is the perfect opportunity to incorporate loquats into your dinner routine. The classic Moroccan dish typically incorporates dried fruit like apricots, raisins, dates, or preserved lemons. Loquats can lend a sweet, tart, slightly citrusy note to this warm tagine that's full of winter squash, chickpeas, and couscous.

Loquat pesto! This playful rendition of Italian basil pesto accentuates the citrus notes in loquats. It's also vegan, but not lacking any of the depth of flavor found in traditional pesto. And the loquats aren't a gimmick here or added for shock value; they add a pleasant body to the texture, plus added bright acidity to balance the rich pine nuts and olive oil.