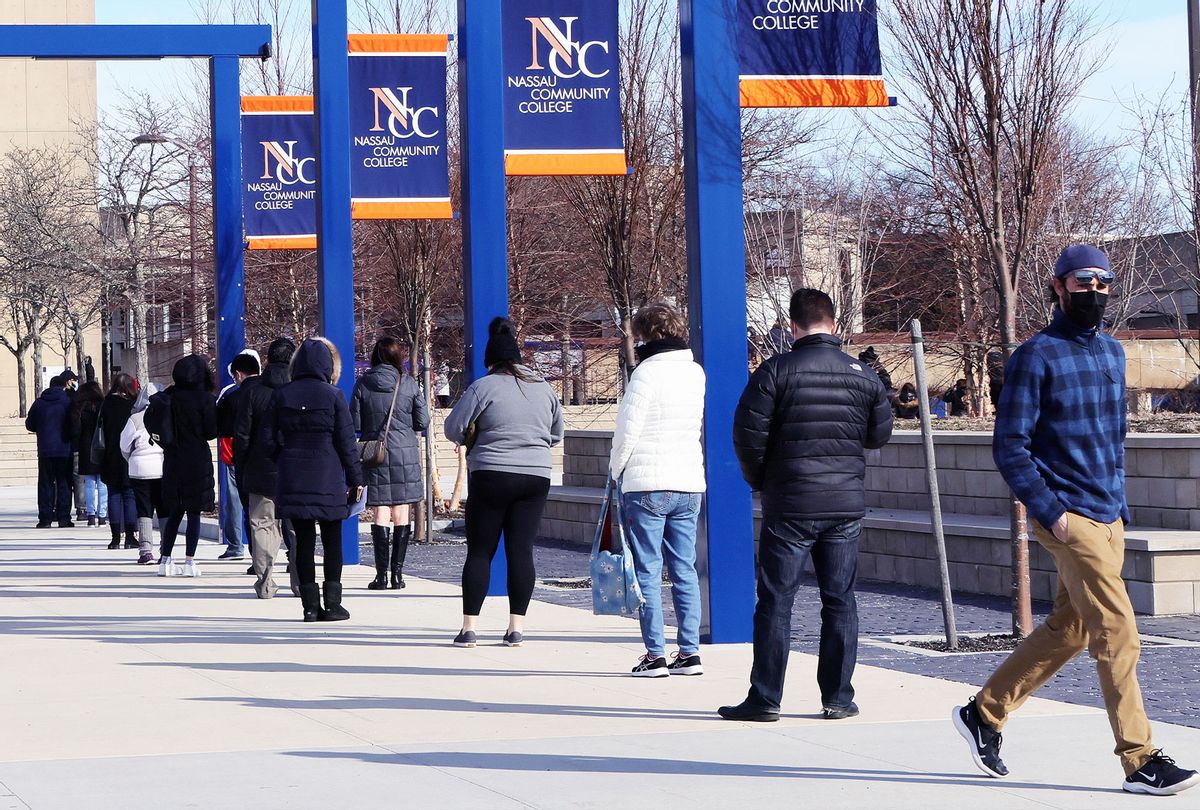 Last week, Amanda Kloots, a co-host on CBS' "The Talk," posted an Instagram photo of herself getting the COVID-19 vaccine. The post sparked a minor social media furor, as many wondered how a 38-year-old woman in California, who by state standards isn't yet eligible for the vaccine, qualified for inoculation. Kloots revealed that she waited at a vaccine site until the end of the day when all other appointments were over — her hope being that she could get a vaccine from an open batch that would otherwise have to be thrown out.

"I went to a site and waited in my car until all appointments were over in hopes that they had any extra vaccine," Kloots explained in an Instagram post. "I was fully prepared to be turned away, but they said they had enough tonight for everyone waiting."

If Kloots' tale of waiting outside a clinic for an extra vaccine to fall off the truck gives you ideas, you're not alone. Many have wondered if waiting outside clinics at the end of the day can yield a free vaccine, one that might otherwise be chucked, or if Kloots' experience was exceptional.

As NPR reported previously, many COVID-19 vaccines at vaccination sites are getting thrown away. That's partly due to the logistics of properly storing the vaccines. The Pfizer vaccine needs to be kept in a freezer at -70° Celsius. Once it is transferred to a refrigerator, it has a short shelf life of just five days because of the fragile mRNA (synthetic messenger RNA) within. The Moderna vaccine is more hardy; it can be kept at a still-frosty -20°C, and can remain stable for up to one month at consumer refrigerator temperatures. But in the case of both vaccines, once the vials have been opened and the content has been thawed, they must be used or thrown out within five to six hours.

Many local news channels in various states are reporting that thousands of vaccines are being discarded for refrigeration reasons, besides people not showing up for their appointments. In North Carolina, an estimated 2,300 were thrown out due to shipping issues, lack of patients, and refrigeration problems. A similar investigation in Massachusetts found that no-shows were primarily responsible for nearly 1,204 doses of the vaccine that had gone to waste. In states where millions are now being vaccinated a day, just a small percentage of vaccines are going to waste — but that's still thousands of people who could have been vaccinated.

Dr. Amesh Adalja, senior scholar at the Johns Hopkins Center for Health Security, told Salon "vaccine scavengers," which is the term he uses to describe the people who wait to get extra doses after hours at vaccination sites, are "serving an important role."

"Their role is to put their arm in the way of the trash can, so if someone's jumping in front of a needle so it doesn't end up in the trash can, I think that's a good thing," Adalja said. "It's unfortunate that it has come to this, but we've got so many problems with the roll-out that these vaccine scavengers are playing a vital role in the ecosystem to prevent us from wasting vaccines."

Other people refer to them as "vaccine hunters," and there's even a website, VaccineHunter.org, designed to help everyday people find leftover doses. According to the website, vaccine hunters should look for standby lists, call their local providers, or visit their local vaccination sites around closing time. The website links to several Facebook groups where people can swap information about extra doses in their communities. Another similar website, HiDrB, was created to match vaccine hunters with vaccine providers in the case that they have to throw out a dose or find an arm.

But not everyone agrees that these strategies are the best approach. As reported by Boise State Public Radio, public health officials in Idaho don't want people lining up after the vaccination site closes to get an extra vaccine before it goes to waste. It's the same in Los Angeles: according to the LA Times, the Los Angeles County Department of Public Health officials say that the county "does not advise residents to show up at vaccination sites in the hopes of receiving a leftover vaccine at the end of day." As an alternative, some healthcare providers are trying to utilize internal lists of employees and family members; or, in other cases, asking those with appointments to come in earlier.

Meanwhile, some doctors have actually been punished for trying to efficiently use their limited supply of vaccine. As reported by The New York Times, a doctor in Texas was fired and then charged with stealing 10 vaccine doses; he had six hours to give out the extra doses before they ended up in the trash. A judge ended up dismissing the charge.

Still, many doctors are supportive of the vaccine-hunter movement.

"These are people who are being aggressive about getting vaccinated, and I'd rather have people being aggressive about getting vaccinated than not wanting to get vaccinated at all," said Dr. George Rutherford, a professor of epidemiology at the University of California–San Francisco. "It doesn't exactly stick with the tier system, but I think it's better than actually throwing it away at the end of the day."

As Rutherford alluded to, there are concerns around ethics and equity when it comes to the vaccine hunter approach. Countless Americans that are qualified to get a vaccine still cannot get a timely appointment. But bioethicists agree that if a dose is truly in danger of going to waste, it's fair to put that shot in someone's arm even if they are technically unqualified.

"I think that this kind of dogmatism over the priority groups — when the choice is to put the vaccine in someone's arm or put it in the trash can, when you've got politicians that would rather have trash cans — it's really, really mind boggling to me," Adalja said.

As for the individual hunt to get vaccinated, the efficacy of vaccine-hunting often depends on where you are located. After spending hours sifting through Reddit threads and Facebook groups, some hunters manage to find a vaccine, while others haven't been as lucky.