Why are conservatives losing their minds over the Mr. Potato Head rebrand?

Hasbro received a flurry of right-wing outrage for nixing the “Mr.” from their beloved product line 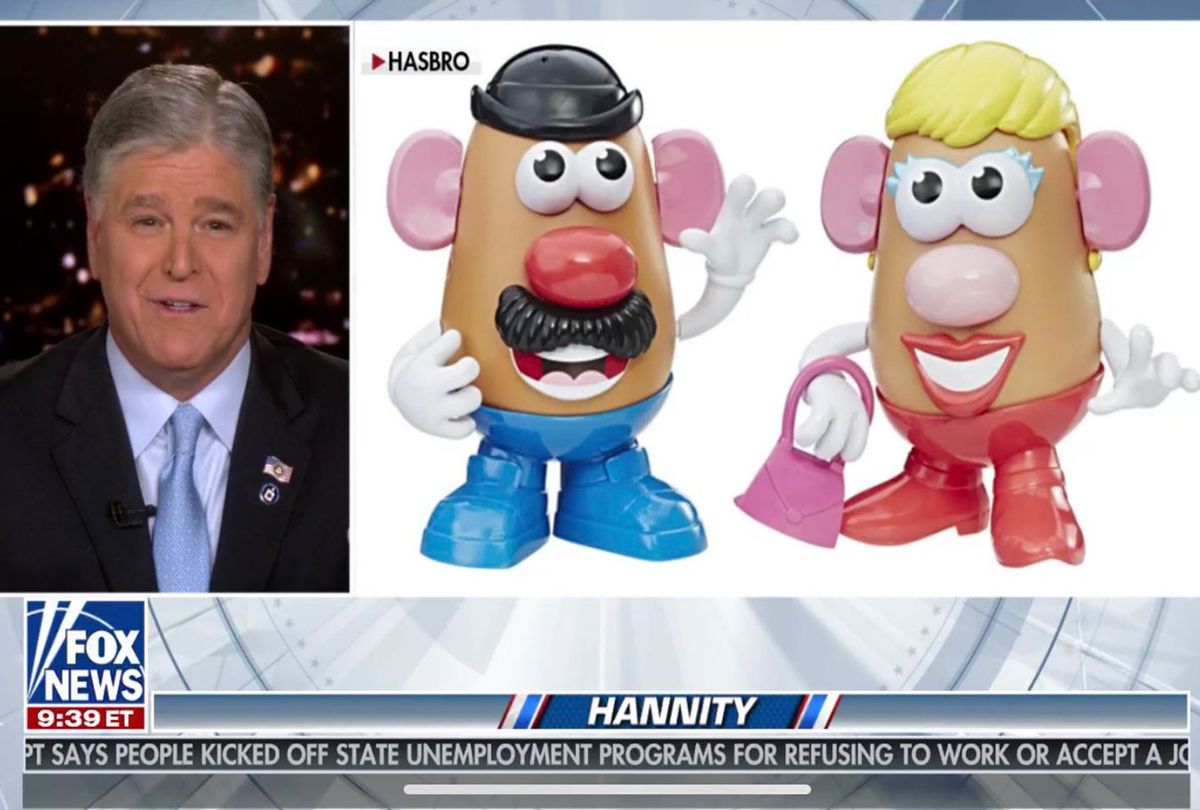 Toy giant Hasbro caused quite a tizzy on Thursday when it announced that it would drop the title "Mr." from its iconic Potato Head product line, first launched in 1952, in a bid to make the brand more inclusive. The news unleashed a torrent of online outrage from conservatives.

"Hasbro is making sure all feel welcome in the Potato Head world by officially dropping the Mr. from the Mr. Potato Head brand name and logo to promote gender equality and inclusion," the company stated on Thursday. Hasbro also announced it would be releasing the "Potato Family Pack" –– which includes two adult-sized potatoes, along with one younger spud –– to encourage children to "create your Potato Head family."

"Culture has evolved," said Kimberly Boyd, a senior vice president and general manager at Hasbro,  according to the Associated Press. "Kids want to be able to represent their own experiences. The way the brand currently exists — with the 'Mr.' and 'Mrs.' — is limiting when it comes to both gender identity and family structure."

The announcement initially left many confused as to whether the company would be scrapping its Mr. and Mrs. Potato Head characters altogether, so Hasbro was quick to issue a second staement.

Although toy companies such as Mattel have pushed the boundaries of representation with respect to ethnicity, size-inclusivity, and disability, Hasbro leads the vanguard in gender identity and expression. Hasbro's move will allow kids to project their own unique conception of gender norms onto their toys, doing away with the heteronormative image presented by the initial product line.

"Mr. Potato Head has now been renamed to be gender inclusive," tweeted Rep. Lauren Boebert, R-Colo., "He's now just going to be called Potato Head. When will the activists demand Joe Biden stops use of the "Come On, Man" catchphrase? For inclusivity's sake, it should be "Come On, Person!"

Conservative radio host and longtime purveyor of "facts over feelings" Ben Shapiro joined in: "Happy Purim, everyone! Apparently according to Jewish law, you must drink enough so that you don't know the difference between Mr. and Mrs. Potato Head."

Boebert, Shapiro, and Hannity's outcry comes as a brigade of Republican-led bigotry mounts on Capitol Hill.

On Thursday, Sen. Rand Paul, R-Ky., delivered a transphobic polemic to Dr. Rachel Levine, the first transgender woman to be nominated for a Senate-confirmed position as assistant secretary of health. Rand likened sex reassignment surgeries to "genital mutilation," and argued that American culture is not only "normalizing the idea that minors can be given hormones," but also increasing the rate of trans-identifying youth because of "the social pressure to conform and do what others do."

Paul's rant was preceded by another transphobic incident earlier this week in which Rep. Marjorie Taylor Greene, R-Ga., placed a transphobic sign –– which read "There are TWO genders MALE & FEMALE. Trust the science!" –– just outside of the office of Rep. Marie Newman, D-Ill, who has a transgender daughter. Green's acerbic gesture came in response to Newman's promotion of the Equality Act, which prohibits discrimination based on gender identity and sexual orientation.