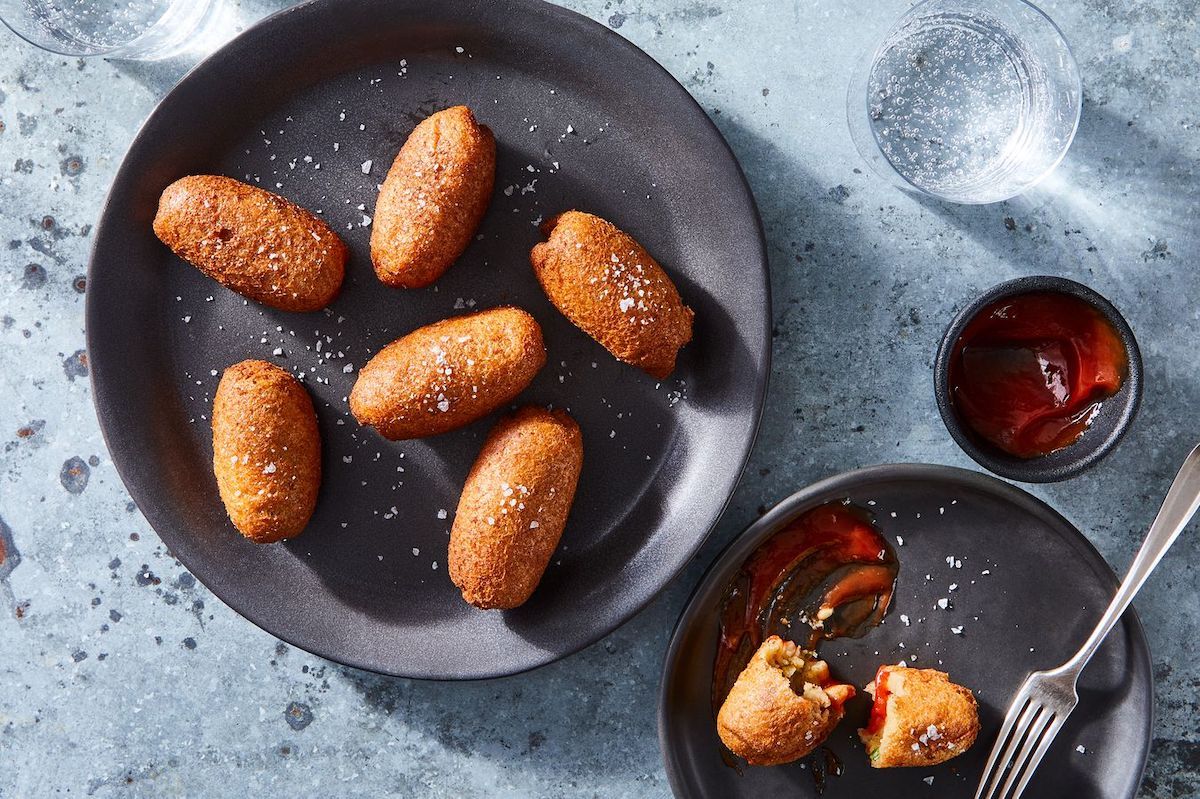 My mother often tells the story of how, as children, my sister and I would come home from friends' birthday parties absolutely famished and declare that we hadn't eaten anything at all. We'd then, she says, clamber onto our dining chairs and wait as she whipped us up something delicious in a matter of minutes: the fluffiest of cheese omelets with a sprinkling of cilantro and chile; shahi tukda that always managed to walk the fine line between cloying and scrumptious; or the thing I looked forward to the most — my favorite snack of all — the bread roll.

Even as my mother fed us, she'd puzzle over how we had returned hungry from a party where there ought to have been plenty of food. Her questions usually went unanswered.

It took my mother's presence at one to figure it out. She says she watched as my sister and I both accepted paper plates piled high with cream cake, samosas, and chips with ketchup — staples at every '90s birthday party in India. She then observed as we retreated to the furthest corner of the room, where we pushed the food around our plates for as long as we could before folding them in half, sliding them under the couch, and escaping. Before my mother could cross the room and get to us, the deed was done.

Back home, my sister and I were forced to explain. We'd been taught not to be rude, we explained, so we always accepted the food and then secreted it away, untouched. We'd rather eat at home, we added. That evening, my sister and I were taught a valuable lesson about not wasting food. It was also the first time we became aware of the concept of privilege.

It's usually when my mother is done narrating this story (for the 127th time since we were kids) that I point out that she, and her endless stream of delicious food, were, in fact, to blame.

My mother has always been the pervading influence on us, and our tastes: Our steady diet of comic books was all her, as was our proclivity for black-and-white classic films (the blockbuster releases in Bangalore's single-screen cinemas didn't stand a chance). And, whether she meant for it to be this way or not, it was her relationship with food and her consummate skill in the kitchen that shaped our ideas around the what, why, and how of eating.

The interesting thing to me has always been how she managed to do that without actively teaching either of us how to cook. So, when I try to trace how and when I came to learn anything at all about food, my mind goes straight to her orchestration of mealtimes.

Even teatime was an event at our home — comprising not just steaming cups of chai, but piles of snacks. Sometimes, those snacks would be sourced: samosas dripping with mint and tamarind chutney from a Bengali sweetshop, potato buns from the neighborhood Iyengar Bakery, masala vadas from a man in the market whose entire setup consisted only of a giant vat of boiling-hot oil atop a tiny handcart. Other times, especially on rainy days, the snacks would be homemade: onion pakoras, piping-hot pazham pori (banana fritters), and those bread rolls—fried to a crisp on the outside, warm and starchy on the inside.

Teatime was so substantial, it's a wonder we ever needed dinner. But we did.

Every evening, a mere hour or two after tea, the smells of dinner would come wafting up the stairs, compelling me to leave the comfort of my room and make my way down. I'd lean on the doorjamb in the kitchen, listening to the sound of knives on the wooden cutting board, the sizzle of onions as they hit the pan, and the grunting of our trusty Johnson mixer grinder as it pulverized tomatoes. From where I stood, I had a clear view of exactly what my mother was doing — without getting in her way.

It was there, standing at that door, that I realized that there often was a great deal of truth behind the many tired maxims I'd been fed at school. Like, "anything worth doing is worth doing well": The vegetables that went into her poriyals always needed to be chopped to millimeter precision if they were to cook uniformly. Or, "timing is everything": Ingredients went into the pan exactly when they were meant to go in and not a minute sooner — unless you wanted a curry in which water separated from the masala. I could keep going.

When I moved to Bombay in my early twenties to work as a writer at a magazine, putting 621 miles between my family and myself for the very first time, I was completely unprepared for the practical challenges of fending for myself. I remember spending that first afternoon on the bed in my temporary apartment, sobbing as I stuffed the chutney sandwich my mother had packed for me in my mouth. It tasted like home; finishing that sandwich had a heartbreaking permanence to it.

A month and a half later, when I moved into more permanent lodgings, I had to contend with cooking for the first time in my life. On my debut attempt at a meal of rice, dal, and potatoes, it dawned on me that the fact that I'd never cooked a single meal did not mean that I didn't know how. My position by that kitchen door had, in fact, been the best seat at the only culinary school I would ever need to attend.

As I write this, the 621 miles have grown to more than 4,000. All the way in Berlin, my kitchen contains as many odes to items my mother has in her kitchen as I've managed to find. A rolling pin that's exactly the same shape and weight as the one she has. A traditional South Indian filter coffee maker, because no stove-top espresso machine could ever come close. A recipe notebook with checkered pages — my mother's preferred writing paper — that contain her recipes. I've got pretty good at replicating many of them over the years, too: chana bhatura and rajma chawal, and her version of kadai chicken that I've long since given up on referring to her notes for.

Perhaps it's because snacks aren't ever totally necessary to make, or that teatime doesn't quite hold the same meaning here as it did back at home, that I've never quite developed the ability to recreate the teatime treats and midnight snacks my mother made us. Or maybe it's that I like leaving them to her deft hands —t here are things you just want to assume she will make you forever. No wonder then that it's these I miss the most; nothing terribly elaborate, but the sort of thing that really hits the spot when one wants to be reminded of home. On cold winter nights in Berlin, that craving for home can only really be assuaged by something deep-fried to golden brown perfection. Like my mother's bread roll.

I will say, though, that the days my mother packed one into my school lunch were bittersweet. The problem was that my mother's bread rolls were equally loved by my schoolmates. So nearly every single time she would send my sister and me off to school with bread rolls for lunch, we'd come back home "absolutely famished" and declare that we hadn't eaten anything at all. We'd then clamber onto our dining chairs and wait as she whipped us up something delicious in a matter of minutes.