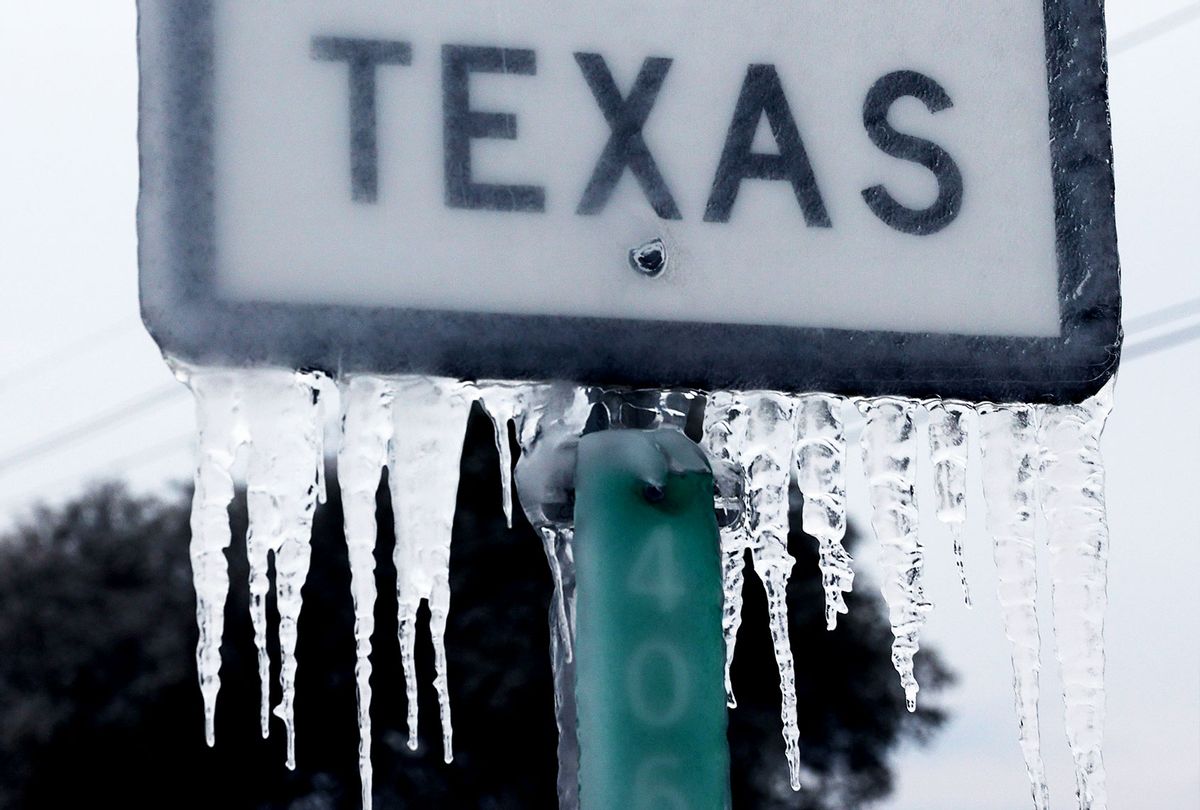 Icicles hang off the State Highway 195 sign on February 18, 2021 in Killeen, Texas. Winter storm Uri has brought historic cold weather and power outages to Texas as storms have swept across 26 states with a mix of freezing temperatures and precipitation. (Joe Raedle/Getty Images)
--

Oil refineries, chemical manufacturers, and petrochemical plants across Texas — mostly in the upper Gulf Coast — warned state regulators that they may have released millions of pounds of pollutants and greenhouse gases into the air due to last week's winter storm.

The arctic freeze in Texas claimed the lives of dozens of Texans, and more than 4.5 million customers were without power for days last week due to blackouts implemented by the state's grid operator. Plants tripping offline in the extreme cold led the Electric Reliability Council of Texas to order power outages to avoid overloading the grid.

The storm and power outages also hit industrial plants, mostly those that produce products derived from oil and natural gas, such as gasoline, diesel and the building blocks of plastic. Those facilities spewed 3.5 million pounds of additional pollution in the air during the power crisis, according to an analysis of notices by Texas environmental groups Environmental Defense Fund, Environment Texas and Air Alliance Houston.

That's nearly as much air pollution released last summer during Hurricane Laura, when facilities in the Beaumont and Port Arthur area reported releasing an estimated 4 million pounds of emissions, according to the Houston Chronicle.

Industrial plants typically shut down in advance of hurricanes to keep workers safe, avoid spills and prevent even worse emissions. Many plants did the same ahead of Winter Storm Uri, but emergency shutdowns still caused a significant amount of pollutants and climate-warming greenhouse gases such as nitrogen oxides, carbon dioxide, and volatile organic compounds.

During emergency shutdowns, and the subsequent re-starts when a storm passes, chemical plants and refineries typically emit pollution well above what their state permits allow as they burn off waste gases.

Power outages and system failures also contributed to excess emissions, companies said in their reports to the state.

Nearly 200 facilities in 54 counties reported excess air emissions between Feb. 11 and Monday, according to the analysis.

"Texas is not ready for increasingly extreme weather, and the state's failure to prepare is hurting communities, especially those near high-risk chemical facilities," Elena Craft, senior director for climate and health at Environmental Defense Fund, said in a statement.

Neighborhoods near industrial facilities are often majority Black and Latino in Texas due to the legacy of government-imposed segregation and wealth inequality, which in turn has resulted in disproportionate health impacts from air pollution for Black and Latino residents.

The Texas Commission on Environmental Quality, the state's environmental regulatory agency, reported power failures at 39 of its more than 200 air quality monitors, including 14 in the Houston area, according to a storm report by the Environmental Protection Agency. The monitors were all operational as of Sunday, according to the TCEQ. The agency deployed additional mobile air monitoring vans to sample pollutants this week.

Disclosure: Air Alliance Houston and the Environmental Defense Fund have been financial supporters of The Texas Tribune, a nonprofit, nonpartisan news organization that is funded in part by donations from members, foundations and corporate sponsors. Financial supporters play no role in the Tribune's journalism. Find a complete list of them here.