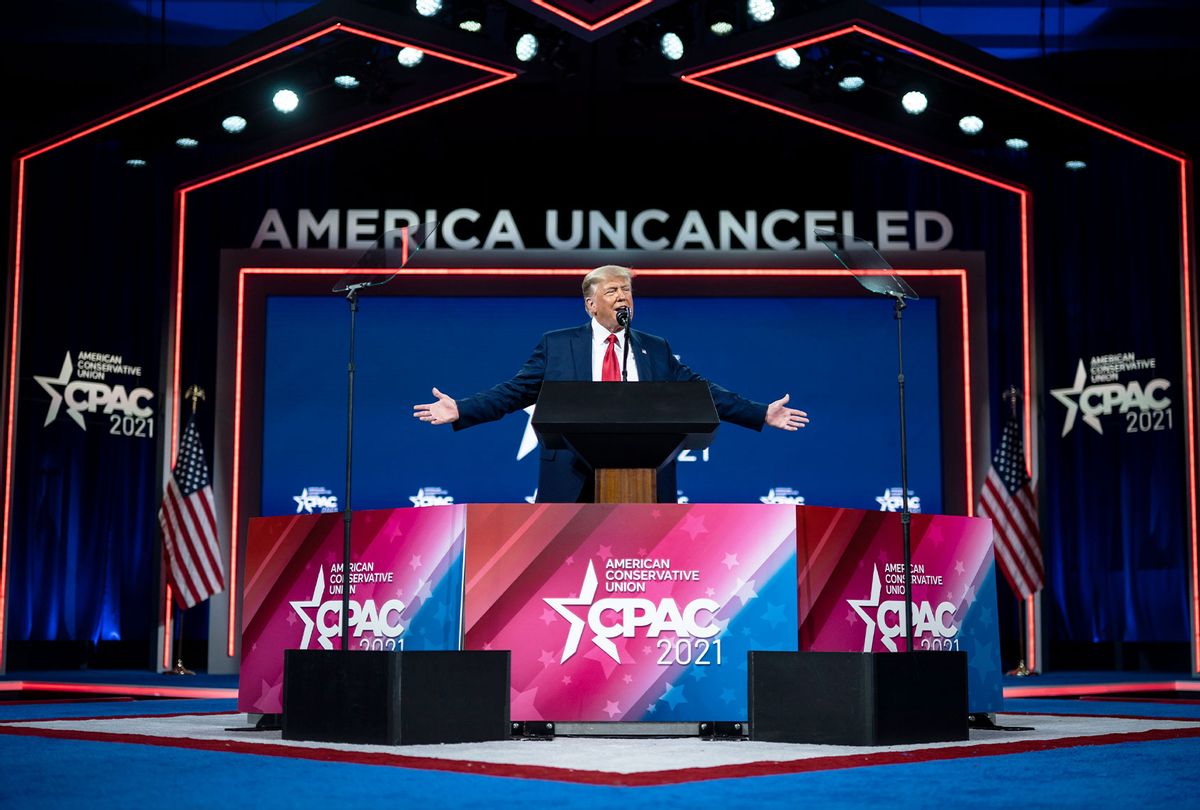 Hyatt Hotels on Sunday said it was treating concerns that the stage for Conservative Political Action Conference — held at the Hyatt Regency in Orlando — resembled a Nazi symbol "very seriously" and condemned symbols of hate as "abhorrent."

Photos of the CPAC stage at the Orlando hotel went viral on social media as thousands of users compared the design to a Norse rune used by the Nazis during World War II. The othala rune, which dates back hundreds of years, was adopted by the Nazis as "part of their attempt to reconstruct a mythic 'Aryan' past," according to the Anti-Defamation League, and was included on certain Nazi SS uniforms. It has since been incorporated by white supremacist groups in the United States and Europe and was seen at the deadly 2017 neo-Nazi march in Charlottesville.

Matt Schlapp, chairman of the American Conservative Union and organizer of the conference, rejected the comparison.

"Stage design conspiracies are outrageous and slanderous," he tweeted on Saturday. "We have a long standing commitment to the Jewish community. Cancel culture extremists must address antisemitism within their own ranks. CPAC proudly stands with our Jewish allies, including those speaking from this stage."

Schlapp also addressed the firestorm from the CPAC stage.

"Don't listen to the lies about this stage," he said. "It is very pretty."

We take the concern raised about the prospect of symbols of hate being included in the stage design at CPAC 2021 very seriously as all such symbols are abhorrent and unequivocally counter to our values as a company. The CPAC 2021 event is hosted and managed by the American Conservative Union that manages all aspects of event logistics, including the stage design and aesthetics. We discussed directly with ACU leadership who told us that any resemblance to a symbol of hate is unintentional. We will continue to stay in dialogue with event organizers regarding our deep concerns.

The company said it allowed the event to continue to avoid a "disruptive situation."

"With CPAC's denial of any intentional connection to hate symbols and our concerns over the safety of guests and colleagues in what could have been a disruptive situation, we allowed the event to continue," a Hyatt spokesperson told Reuters.

The company previously touted its "highly inclusive environment" after coming under scrutiny for hosting the event, which featured a torrent of lies supporting Donald Trump's false claims that the 2020 presidential election had been rigged.

"We believe in the right of individuals and organizations to peacefully express their views, independent of the degree to which the perspectives of those hosting meetings and events at our hotels align with ours," a Hyatt spokesperson told Fox Business on Friday.

But on Sunday, the company told Reuters that its staff "occasionally faced hostility from attendees" who were asked to wear masks and practice social distancing, and said it was "extremely disappointed by the disrespect many individuals involved in the event showed to our colleagues."

CPAC, which went with an "America Uncanceled" theme this year, previously canceled a scheduled appearance by YouTuber Young Pharaoh after he made anti-Semitic comments, calling Judaism a "complete lie" and "made up for political gain." The event still featured Rep. Paul Gosar of Arizona, an increasingly controversial Trump supporter who condemned "white racism" after coming under fire for attending a white nationalist conference organized by a Holocaust denier a day earlier.

The event came just weeks after Trump supporters overran Capitol Police and hunted lawmakers through the halls of Congress. Some members of the mob hurled a stream of racial slurs at Black officers while others wore T-shirts mocking the Holocaust.

Schlapp came under fire over for dismissing the concerns about the stage.

"I'm not sure the commitment to the Jewish community is too terribly strong if your stage is literally shaped like a Nazi rune, whether by design or by chance," tweeted Kurt Braddock, an extremism expert at American University.

Former right-wing blogger Charles Johnson questioned Schlapp's characterization of the blow-up as a "conspiracy" since the stage looked like "an exact replica of a Nazi rune."

"Schlapp's reaction actually makes me more likely to suspect the Nazi rune was deliberate," he wrote. "Who the hell learns they're using a Nazi symbol inadvertently and instead of immediately getting rid of it, makes excuses and pretends it's a conspiracy to persecute them?"