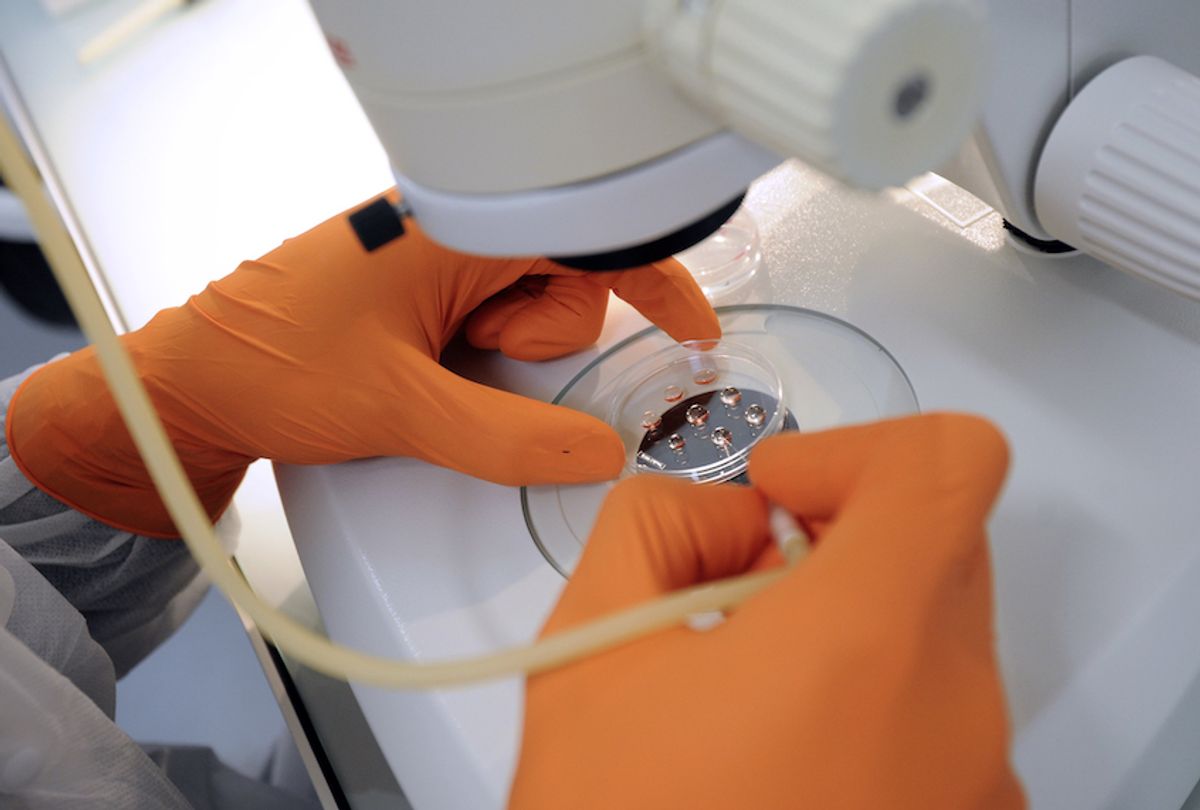 French Fabien Danjan of CNRS (French Reseach Institut Center) processes to a handling as he introduces embryonic stem cells in a mouse embryo to set a genetically modified line, on February 9, 2012, at the Centre d'Immunologie de Marseille-Luminy (CIML), in the transgenesis laboratory which in charge to create animals in order to understand how genes work, in Marseille, southern France. AFP PHOTO / ANNE-CHRISTINE POUJOULAT (Photo credit should read ANNE-CHRISTINE POUJOULAT/AFP/Getty Images) (Anne-Christine Poujoulat/AFP/Getty Images)
--

Premature ovarian insufficiency (POI) is a condition in which a person's ovaries stop working before the age of 40. Patients with POI experience ovarian dysfunction and irregular or absent menstrual periods long before the normal age of menopause, sometimes when they are still teenagers.

At birth, ovaries contain 1-2 million eggs, each one surrounded by a sac-like structure called a follicle. Every month, starting at puberty, a follicle fully develops, resulting in the release of a mature egg – ovulation.

However, people affected by POI present an unusually low number of follicles in their ovaries, and the follicles they do have are often dysfunctional and do not undergo normal maturation. Consequently, their ovaries stop producing sex hormones and releasing eggs regularly or even at all, greatly decreasing fertility. Although ovarian activity might occur sporadically, only 5-10% of people with POI are able to conceive spontaneously. Moreover the success rates of fertility treatments are low unless they use donor eggs.

But research has found that that stem cells could be used to enhance the ovarian function of people with POI. And a recent study including 61 POI patients below the age of 35 who had an intention to get pregnant, published in the journal Cell Proliferation, indicates that injecting ovaries with these cells could be a safe treatment for POI.

Stem cells are promising for treating many diseases because they are able to renew themselves and to differentiate into several cellular types. In particular, growing evidence from pre-clinical and clinical studies indicates that stem cells could restore menstruation, hormone levels and, in rare cases, the ability to conceive. These cells seem to have a positive impact in ovarian function by producing substances that limit the death of ovarian cells, inhibit ovarian aging, and improve the formation of blood vessels. In addition, stem cells also have anti-fibrotic, anti-inflammatory and immunomodulatory effects. But despite these promising findings, further clinical results are needed to confirm the potential of stem cell therapies in treating POI.

Overall, the patients treated with stem cells in this new study displayed improved ovarian function, seen in the increased number of follicles at different stages of development. The positive effect of the stem cells was particularly noticeable when the researchers realized that participants receiving an injection in only one of the ovaries developed follicles in that ovary but not in the other one.

Remarkably, two patients even started menstruating again after having had missing or irregular periods for at least a year and a half. In addition, one of them developed several follicles in both ovaries long after the treatment, suggesting that the stem cells completely restored ovarian function in that participant.

The stem cell treatment also had a positive impact on fertility. In fact, after stem cell transplantation, some patients' ovaries contained mature follicles ready for ovulation. Furthermore, three of eight patients undergoing in vitro fertilization (IVF) were able to conceive, in addition to a patient who was even able to get pregnant through sex with partner.

Despite these very promising results, the researchers noticed that some participants seemed to benefit from this therapy more than others. To understand what was causing this, they compared the clinical characteristics of patients who successfully developed mature follicles in response to the treatment and those who did not. They found that participnats who had some follicles in their ovaries prior to the stem cell transplant had better chances of presenting mature ones afterwards. These findings are an extremely important first step to define the subgroups of patients who are more likely to respond to this type of treatment.

Besides being able to improve ovarian function and fertility, this treatment did not trigger any serious side effects, indicating that stem cells, at least those derived from the umbilical cord as they were in this study, could be a promising and safe resource for the clinical treatment of POI in the future. However, some questions remain, such as how long the positive effects last and the ideal dose of stem cells. Although the findings suggested that subjects receiving more than one stem cell injection achieved higher follicle counts and thus, better ovarian function, several participants were lost to follow-up.

This study is exciting for the scientific community because it provides evidence for another potential clinical application of stem cells. Several studies have explored the use of these cells to treat cardiovascular, metabolic and neurological diseases, among others. Still, to date, the FDA has only approved the use of  stem cell-based therapies to treat blood and immune disorders. As more and more studies provide evidence of these cells' clinical benefits, it is likely that the number of registered stem cell therapies will increase in the near future.