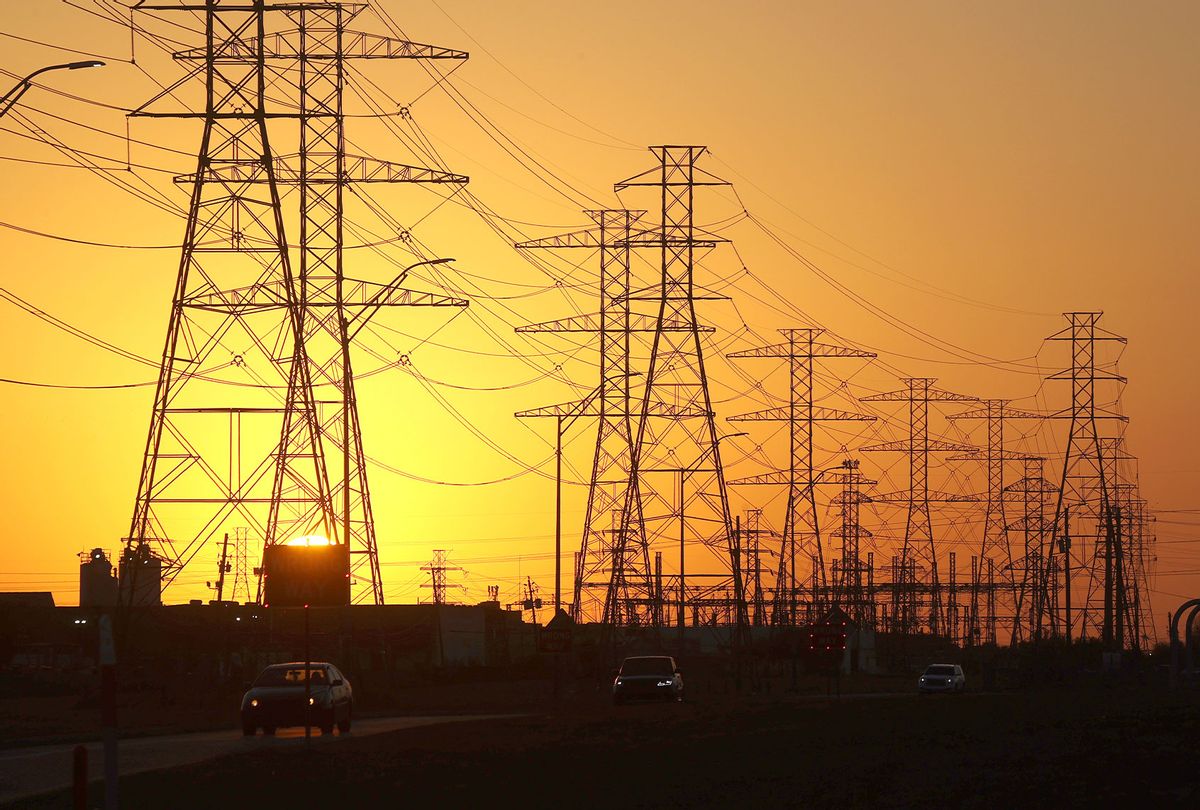 A view of high voltage transmission towers on February 21, 2021 in Houston, Texas. Millions of Texans lost their power when winter storm Uri hit the state and knocked out coal, natural gas and nuclear plants that were unprepared for the freezing temperatures brought on by the storm. Wind turbines that provide an estimated 24 percent of energy to the state became inoperable when they froze. (Justin Sullivan/Getty Images)
--

When the blame for the collapse of the Texas electrical grid is done, the political survivors, say some environmentalists, will be the Republican Governor Greg Abbott, who opposed requiring winterizing energy delivery systems, and the Railroad Commission of Texas. Known as the RRC, this low-profile, powerful agency regulates the fossil fuel industry in Texas. The fossil fuel industry has donated tens of millions of dollars to Governor Abbott and its regulatory agency – the RRC. In neighboring Oklahoma, an industry donating to its regulatory agency would be illegal.

"Energy industry contributions to Railroad commissioners likely contributed to decisions not to require gas production facilities to be weatherized," said Tom "Smitty" Smith, former director of Public Citizen in Texas. He added that RRC commissioners raised more than $11 million in recent years, taking 60 percent of it from the oil and gas industry that they're elected to regulate, according to a new study by Texans for Public Justice, Public Citizen, and the Sierra Club's Lone Star Chapter. Smith noted that in an earlier analysis 60 percent of all money donated to the RRC commissioners came not when they were running for office, but before regulatory decisions.

On Thursday morning, the Texas legislature held three hearings to examine the ice storm disaster that crippled the lone star state. Some 26 million Texans lost electricity during freezing temperatures, leading to loss of heat and water, food shortages, and millions of dollars in damages when frozen pipes burst. Eleven-year-old Christian Pineda died in the cold. The deregulated electrical system in Texas allowed for a $17,000 bill for three days of scarce electricity in one house. Those kinds of bills are on hold, but not cancelled.

The focus of the hearings will probably be on the non-profit that operates and manages the electric grid system in Texas, ironically named, Electric Reliability Council of Texas, or ERCOT. Five members of ERCOT's Board of Directors, including the chair and vice-chair, resigned as of Wednesday. Also present in the house hearings will be members of the RRC and the Public Utility Commission of Texas (PUC), which oversees ERCOT.

Smith says, "PUC has no authority over gas production. The CEOs of Texas's two largest generating companies said at the hearing today, '…they had plants that failed to run because they couldn't get gas or the pressure was too low,''' Smith concludes. "That's the result of the failure of the RRC to require weatherization."

Of the three agencies, the most powerful is the misnamed Railroad Commission, which has nothing to do with railroads, but regulates oil, gas, coal, alternative fuels, and pipelines in Texas. Natural gas is burned to generate most of the electricity in Texas. During last week's disaster, parts of the natural gas pipelines, which were not winterized sufficiently, froze and could not deliver gas to generate electricity.

Smith, a 40-year veteran of Texas environmental politics, predicts Abbott will mandate winterizing electric utilities but not the equipment that gas companies use to deliver the natural gas burned to generate electricity. He told TYT, "Time after time after time -- three times in the last ten years -- we paid big for RRC not requiring that we protect (natural) gas devices or wells." After the dust of accusations settles, Smith says, without sufficient weatherization there will be a repeat electrical breakdown in Texas. Smith also notes that the ERCOT board members who resigned at Abbott's request were all out-of-state business people. This was intentional, to make ERCOT more independent and lessen the influence of Texas business interests.

Where business interests of this fossil fuel friendly state are clearly a huge factor are with Governor Abbott and the three elected members of the RRC, all conservative Republicans.

The Fossil Fuel Donations to their Regulators

According to a study by Texans for Public Justice, Sierra Club, and Public Citizen, in his 2014 run, Abbott raised nearly $10 million from fossil fuel companies. Gizmodo reported that Syed Javaid Anwar, the CEO of Midland Energy, donated a total of $1,617,500 to Governor Abbott's PAC, the single biggest donor to Abbott. The CEO of the Dallas-based pipeline company Energy Transfer Partners, Kelcy Warren, donated $500,000 to Abbott's PAC, totaling $2,117,500 from the two fossil fuel donors.

The Railroad Commission members have similar close ties to fossil fuel companies. Chairman Christi Craddick is from an oil company family based in Midland, Texas. This is part of her description on the RRC home page: "During her career as an attorney, she specialized in oil and gas, water, tax issues, electric deregulation and environmental policy." Her ties to the oil industry, which she regulates, are so open that former RRC Commissioner Ryan Sitton, a Republican, publicly complained about what he called Craddick's conflicts of interest. In Oklahoma, ethics laws prohibit commissioners there from holding any interests or receiving anything of value from companies they regulate.

The donations to her campaigns, according to the above study, read like a who's who of the Texas fossil fuel companies, beginning with a donation from her father's oil company:

Railroad Commissioner Wayne Christian is described on the RRC web page as having, "…accumulated a strong record of standing for free markets and against burdensome regulations." The Texans for Public Justice study found nearly half of his contributions were from the fossil fuel industry he would regulate.

(Note: Above contributors gave just over $500,000, or almost half of what Christian raised.)

The third RRC commissioner was not in office when the 2016 study was completed. As TYT reported last week, the RRC web page describes Commissioner Jim Wright as a part of the fossil fuel industry, saying, "…he has successfully used his hands-on experience to create a group of environmental services companies that service the energy industry."