Memo from Texas: Without big, bold progressive leadership, we die

Republican governance has failed my home state in dramatic fashion. Now Joe Biden and the Democrats must step up 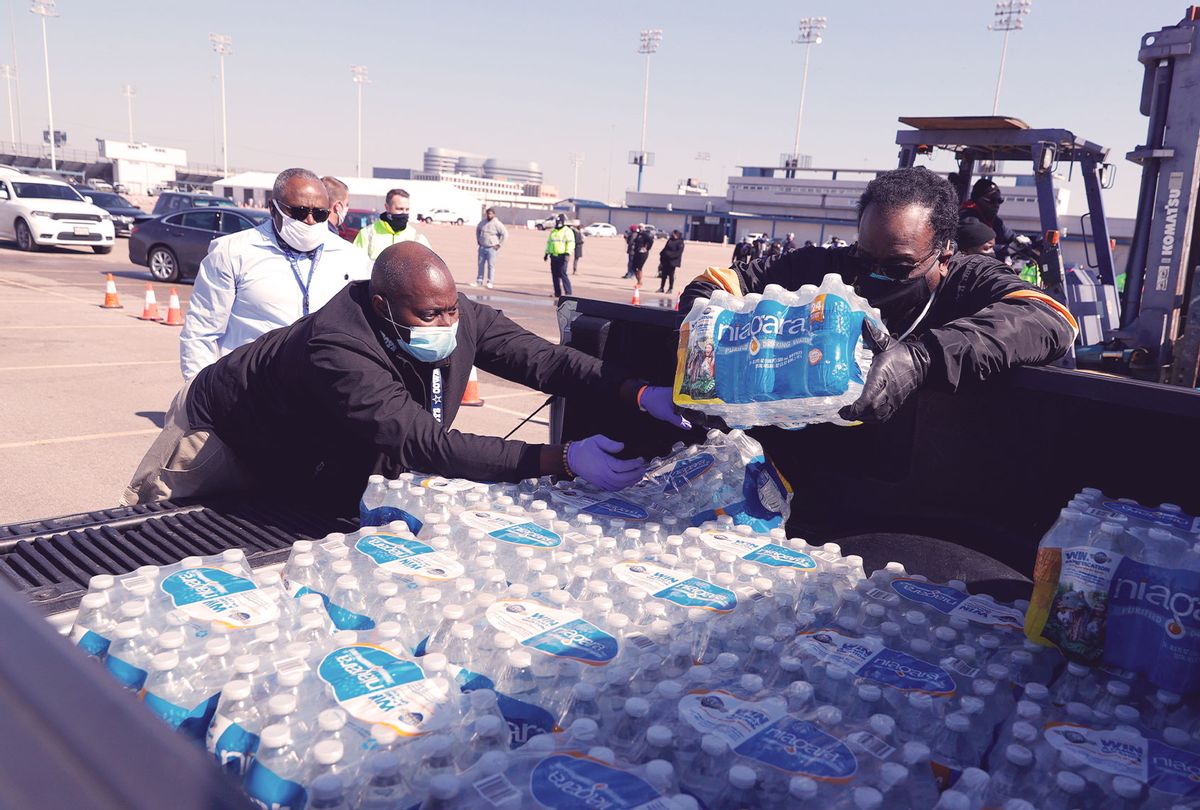 Volunteers load cases of water into the bed of a truck during a mass water distribution at Delmar Stadium on February 19, 2021 in Houston, Texas. Much of Texas is still struggling with historic cold weather, power outages and a shortage of potable water after winter storm Uri swept across 26 states with a mix of freezing temperatures and precipitation. Many Houston residents do not have drinkable water at their homes and are relying on city water giveaways. (Justin Sullivan/Getty Images)
--

President Joe Biden visited Texas on Friday as the Lone Star State worked to recover from a predictable major winter storm and preventable power outages. As a native Texas resident and longtime progressive organizer, I respectfully offer the following suggestions to the president. After a week without heat, water and food, Texans are ready for big, bold progressive leadership that sees the challenges of the future and seizes the moment to address them today.

Texas just experienced its first statewide, 254-county climate change catastrophe alongside another monumental failure of a Republican-run government that better serves the short-term profits of their corporate backers than the people of Texas. The power went out, children froze to death, pipes burst and, for a week, millions of people's lives were plunged into chaos.

I have worked and organized in Texas for over a decade. I have never experienced anything like the colossal statewide failure in governance that just occurred. I experienced the cold, the lack of water, the fear of being able to obtain food for my family and the uncertainty of this sad moment in our state's history. What happened here must not ever happen again.

While Democrats may control the federal government, progressives must invest in fighting for smart, effective governance at the federal, state and local level that meets the challenges facing our country. That means defeating the dangerous ideology of government "small enough to drown in a bathtub" locally in 2022. Last week, when the lights went out across Texas, the lights went on in many Texans' heads. What they saw was not a naked Republican emperor, but one wearing a winter coat inside his house using the water in his bathtub he had planned to drown "small government" in to flush his toilet. If that vision wasn't clear enough, we are likely to face an even worse disaster in the future.

The good news is that we can collectively do something about this: We can vote those responsible out. Let this be the moment in which we collectively activate for change. What happened in Texas is a call to action to organize and win policy changes now — and win elections in 2022.

Texas has been a laboratory for Republicans to test their ideas of governance and leadership — and they failed miserably to protect Texans from catastrophe. In 1999, when then-Gov. George W. Bush signed into law an energy deregulation bill pushed by his largest corporate backer, Enron, they promised cheap, reliable energy. It turns out that Texans received neither — as recent weeks have demonstrated, without investments in excess capacity and winterization, the energy supply was not reliable. It also turns out that, according to a Wall Street Journal study, it wasn't cheap either. Since the implementation of deregulation, Texans have paid $28 billion more for energy than if they had bought it from traditional utilities. Combined with the continued reliance on fossil fuel energy in the state, Republican governance made a bad situation worse, including worsening the climate crisis itself.

Democrats won big in 2020, and must respond with policy victories that embrace bold progressive ideas that meet the moment and the needs of the people. Locally, we must organize and invest and, through collective action, ensure that disasters like what just occurred in Texas never happen again.

Texas offers a clarion call for bold progressive policies that help all Americans, not just corporations and the mega-rich. We need policies that upgrade the energy system, invest in infrastructure, create millions of jobs and mitigate climate change. We need a $15 minimum wage to help Americans struggling through these multiple crises. We need laws that strengthen our democracy like the For the People Act  (H.R. 1) so that the public's interests are served. Democrats should embrace these policies and provide real solutions for the real challenges that face our country.

Mr. President, Republican governance has failed our state. Texans are looking to you to lead where Republicans cannot take us — a world where we invest in preventing disaster and preparing for the storms to come.

Tory Gavito is the president and co-founder of Way to Win.