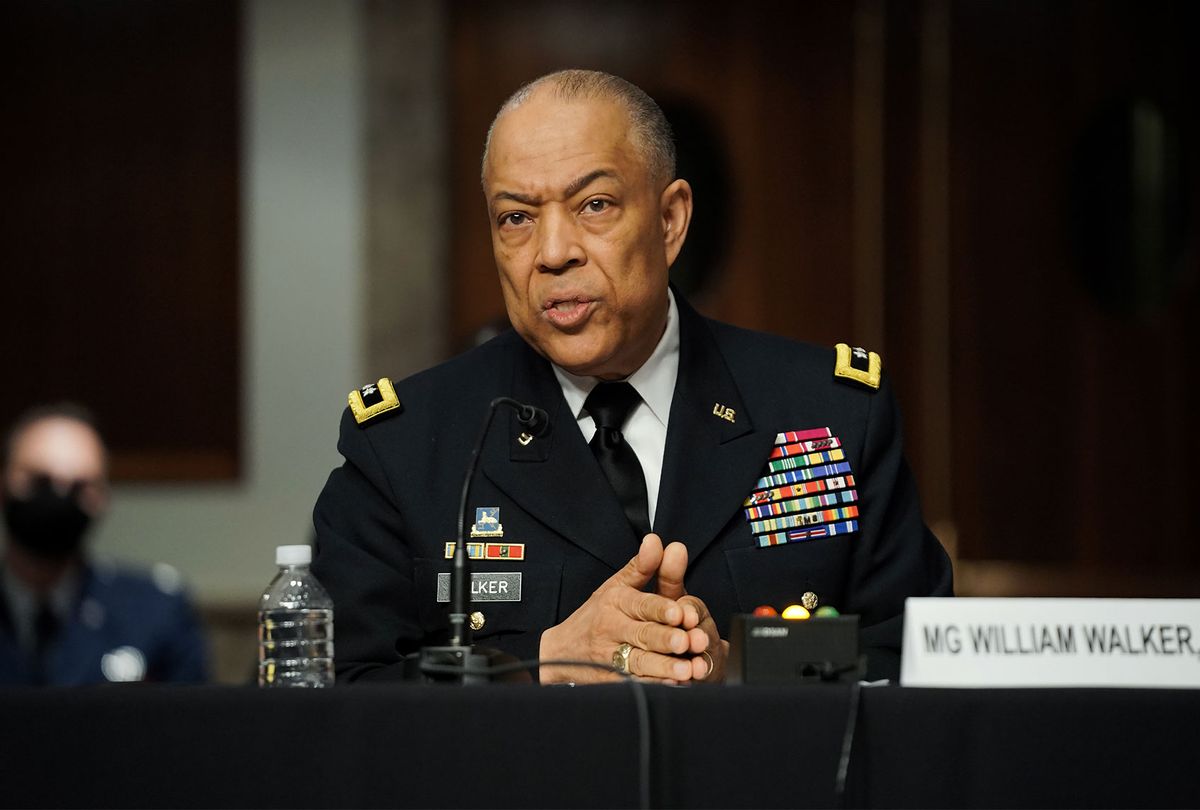 Army Maj. Gen. William Walker, Commanding General of the District of Columbia National Guard answers questions during a Senate Homeland Security and Governmental Affairs & Senate Rules and Administration joint hearing to discuss the January 6th attack on the U.S. Capitol on March 3, 2021 in Washington, DC. The committee is scheduled to hear testimony about DHS, FBI, National Guard and Department of Defense support and response to the attack on the U.S. Capitol on January 6. (Greg Nash-Pool/Getty Images)
--

On Jan. 6 at 1:49 p.m., Maj. Gen. William Walker, commander of the District of Columbia National Guard, received a frantic phone call from then-Capitol Police Chief Steven Sund. The Capitol complex was being overrun by hostile supporters of then-President Donald Trump, Sund told the general, asking for immediate assistance from as many National Guard troops as Walker could muster.

"I would have immediately pulled off the Guardsmen supporting the Metropolitan Police Department," Walker testified before a Senate committee on Wednesday, and told them to "get on buses and go straight to the armory and report to the most ranking Capitol Police officer they saw and take direction."

But the decision wasn't up to Walker; he needed Pentagon approval. While he awaited the official go-ahead, Walker quietly directed 155 Guard troops to meet at the D.C. armory and board buses, in order to be ready the second the order came down.

"That number could have made a difference" in terms of controlling the crowd and protecting the Capitol, Walker told lawmakers. "We could have helped extend the perimeter and push back the crowd. Seconds matter. Minutes matter."

At 5:08 p.m. — three hours and 19 minutes after his request to senior Army leadership to deploy troops — Walker finally received the green light. The Guardsmen waiting aboard the buses arrived at the Capitol 18 minutes later, only to be greeted with the aftermath of a chaotic bloodbath that had spread across the sprawling grounds and into the halls of Congress.

Walker agreed that the hours-long delay, which left him "frustrated" and "stunned," was unusual. He said that last summer, amid the deployment of D.C. National Guard troops during protests against racial injustice, he was in "constant communication with" then-Army Secretary Ryan McCarthy. On Jan. 6, he said, there was radio silence.

During a call with senior Army leadership, as well as Capitol and city officials, to request mobilization of the National Guard, Walker said that military leaders, including Lt. Gen. Charles Flynn — the brother of former Trump official Michael Flynn, who called for martial law amid efforts to subvert the election — and Lt. Gen. Walter Piatt, raised concerns about the optics of sending federal troops to protect the Capitol.

"The Army senior leaders did not think it'd look good [or] would be a good optic," Walker said. "They further stated it could further incite the crowd."

The National Guard commander said the issue of optics was "never discussed" when troops were deployed last summer during the Black Lives Matter protests.

Throughout Congress' probe of the riot, current and former government officials have offered conflicting timelines and statements about the events that unfolded on Jan. 6. Wednesday's hearing was no different.

Robert Salesses, a senior Defense Department official who also testified, pushed back against some of Walker's testimony, including the timing of the troop deployment, the suggestion that Flynn and Piatt were concerned about optics and Walker's authorization to unilaterally deploy troops.

Walker told lawmakers that prior to a Jan. 5 memo from then-Army Sec. McCarthy and then-Defense Secretary Chris Miller stating that he must seek their authorization to address any civil disturbances, he had the power to deploy troops. Salesses, the acting assistant secretary of defense for Homeland Security, contended that it had always been the case that Walker would need prior authorization.

Salesses also told lawmakers that McCarthy approved the request for the National Guard at 4:32 p.m. but that it wasn't until 5:08 p.m. — 36 minutes later — that Walker was notified. Salesses did not offer a clear explanation for the time lapse, suggesting there were obvious communication failures in the chain of command.

Gen. Mark Milley, chairman of the Joint Chiefs of Staff, defended the federal government's response time to the insurrection while traveling with reporters on Tuesday, according to The Washington Post.

"For the Pentagon, that's super fast," he said. "That's like sprint speed."