Why some New Age influencers believe Trump is a "lightworker" 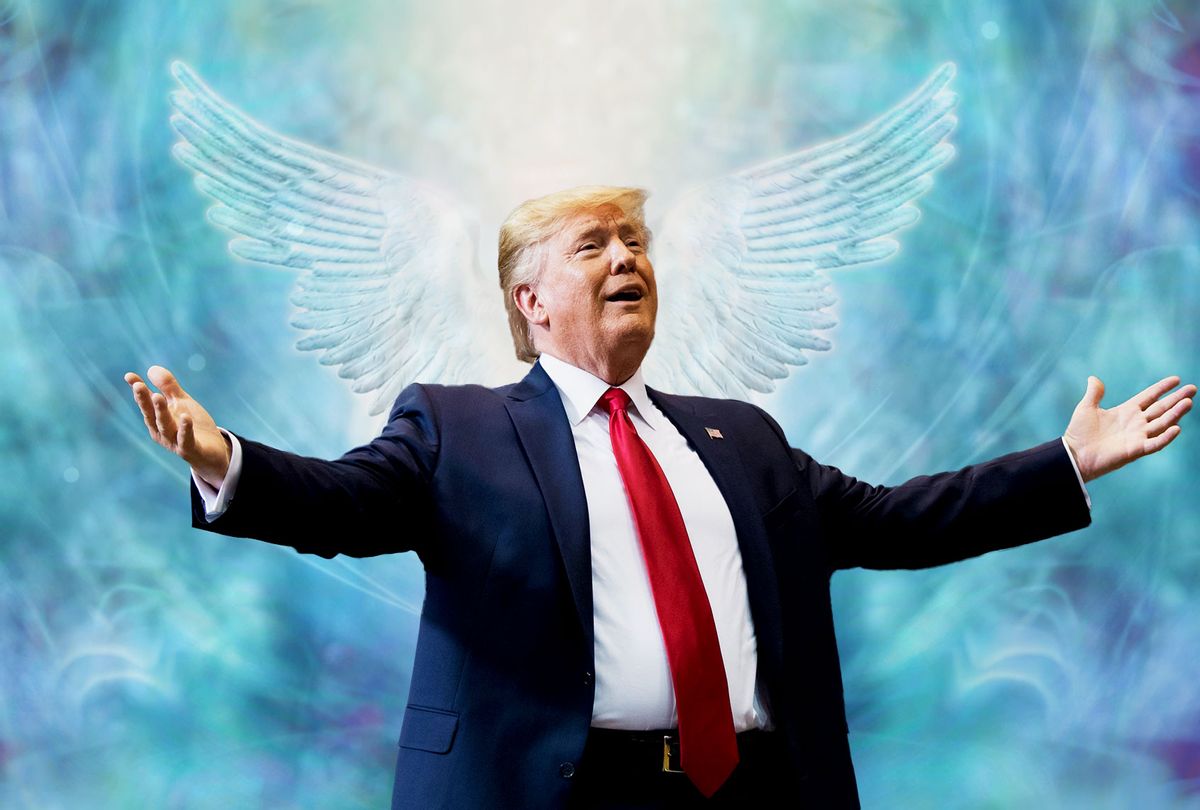 Lorie Ladd gazes into the camera with glossy eyes, a look that mimics the long stare one gets after meditating. She's about to give one of her sermons, one of the "most challenging" ones she's ever had to make, she explains. Ladd says she's received a message that needs to be shared from "higher dimensional consciousnesses," what she refers to as the "Galactic Federation of Light." But before revealing the message, Ladd, a self-described "ascension teacher," advises her viewers to shed the stereotypes that have been "programmed" into them — "polarities," she calls them, like "Democrat" and "Republican" — and listen to her message: Donald Trump is a "massive and powerful lightworker."

"To say that I was shocked was an understatement," Ladd tells her nearly 139,000 YouTube followers of her revelation. "I have been digesting information from my guides about what this lightworker in human form looking like Donald Trump has been doing for the human collective; this man has more charge around him than any other human on the planet right now."

Ladd goes on to explain that her video isn't a "political one," but a "consciousness one," and that she's not talking about "voting," but "ascension." Trump, as she explains in the next half hour, is here to help assist humans in what many in the New Age and spiritual communities refer to as a great "awakening" of consciousness. The idea behind the awakening is that human consciousness is approaching a "fifth dimension," which will eventually bring humans closer to the "Source."

A lightworker, as defined by well-being magazine Happiness, is someone who feels "an enormous pull towards helping others." The term, they say, can be interchangeable with "crystal babies," "indigos," "Earth angels" and "star seeds"; "these spiritual beings volunteer to act as a beacon for the Earth, and commit to serving humanity," the story continues. The magazine states that the term was first coined by the New Age author Michael Mirdad.

This rhetoric might sound cultish, but these phrases don't belong to any one specific religious sect. Indeed, such belief systems are part of a larger, more diffuse New Age culture embraced by the ever-increasing number of Americans leaving organized religion in droves — or who were never religious in the first place — and turning to conspirituality by way of many self-described spiritual and wellness influencers online.

Conspirituality, the term that defines this movement, was coined by researcher Charlotte Ward. She describes conspirituality as "a rapidly growing web movement expressing an ideology fueled by political disillusionment and the popularity of alternative worldviews." There is no official indoctrination video, no book to read; the hundreds of thousands of people who embrace these New Age-like beliefs find them on YouTube vlogs like Ladd's, as well as Instagram and Facebook. Recently, conspiritualists have begun to overlap with the far-right conspiracy theory QAnon.

[Related: Meet the spouses whose marriages were destroyed by QAnon.]

This notion that Trump is a lightworker shares obvious parallels with the belief, held by some evangelicals, that Trump is comparable to Jesus; similarly, some QAnon followers believe that Trump is the "world leader" whose mission is to "save the children."

Yet what makes the lightworker theory especially odd is that it has emerged from a demographic that would have previously been described as apolitical, or even far-left.

However, as the January 6 insurrection on the Capitol showed, QAnon and Trump adherents are no longer just middle-aged, conservative white men like the Republican Party of yore. Many of those who embrace right-wing fringe beliefs are yogis, and love-and-light types, too. Take Jake Angeli for example, the so-called "QAnon Shaman" who donned a horned hat and spear-tipped American flag as he stormed the Capitol building on January 6. The 33-year-old, who identifies as having "shamanistic" beliefs, was recently granted the right to be fed an all-organic diet in jail in line with his religious practice.

Ladd's declaration that Trump was a lightworker sent shockwaves through conspiritual and self-help communities. (Salon reached out to Ladd for comment, but did not receive a response.) Some spirituality and consciousness bloggers vehemently disagreed. But many influential figures in the community thought Ladd was onto something, including Christiane Northrup, a physician and best-selling author who has been spreading anti-vaccination rhetoric and has embraced QAnon.

Matthew Remski, a co-host of the Conspirituality podcast and a cult dynamics researcher, described Northrup as a "conspirituality aggregator" who feeds what she finds most interesting to her followers, of which she has many.

"What I think is really brilliant about this particular iteration of QAnon — or 'soft' or 'pastel Q,' you could call it — is that it's really effective at evading content moderation," Remski said. "To only really say something positive about the person who's at the head of QAnon mythology and sort of soft-pedal all of the aggression and triumph that is going to be involved in his mission is a really good way of brand-washing QAnon for the wellness set."

Indeed, while social media companies like Twitter and Facebook have suspended many accounts sharing QAnon-related disinformation, the wellness influencers remain. Dr. Ronald Purser, a professor of management at San Francisco State University and the author of "McMindfulness," said that in uncertain times, societies see a rise of "occultures," meaning "groups of people who are attracted to strange occult and esoteric ideas, mixing them in unforeseen ways with political movements."

"A common theme in such movements is the need for purification, purifying and purging unwanted elements – toxins, impurities, or anything foreign or other," Purser said. "This is why we see so many New Age yoga practitioners seduced by QAnon."

Purser said there are parallels between the rise of "occultures" now and the role spirituality and mysticism played in Nazi Germany. Notably, the Third Reich appropriated the swastika, a symbol used by Hindus, Buddhists and Jains; the word means "well-being" in Sanskrit.

"Consider Hitler, who was obsessed with the occult, was a vegetarian, used astrologers [and] oracles," Purser said. "The Nazi Heinrich Himmler, head of SS, was enamored with Eastern mysticism, and he sent an expedition to Tibet in search of lost remnants of a secret and pure Aryan race; Hitler was seen as a 'light worker' [as in someone who's saving humanity] that would purge Germany of Jews."

Purser added that Trump and his enablers have "mastered the ability of weaponized mass delusion through social media."

"Many of the New Agers drawn to QAnon are probably suffering from unresolved trauma – like many in Trump's base as well," Purser said. "It's easier to look to a savior and to find scapegoats than to face one's own fears and pain."

When asked about the term lightworker, and where it derives from, Remski said he first heard it when he was in a "Course in Miracles cult" from 1999 to 2003. The name is a reference to a book, titled "A Course in Miracles," that was published by Helen Schucman in 1976; Schucman claimed the book had been spoken to her via "inner dictation" from Christ. Remski said the word "light" appears in the text frequently.

"Light is not only the sort of keynote of this Manichaean universe in which things are either light or shadow, they're either good or bad, it's also like schizotypal as a universe, it is given this materiality as well," Remski said of Schucman's book. "Light is said to be something that can fill a person up, it can blow a person apart, it can enter a person, and I think it probably overlaps with some pre-modern ideas like prana or ch'i — those kind of folk medicine ideas of vital force — but it's also associated with an absolute truth, an ontological transformation . . . like once once light enters into you, you are forever changed."

Remski believes the conspiritual rhetoric around "light" started after the book was published. While the book "A Course in Miracles" doesn't include the term "lightworker," the theme of light itself runs throughout. "The key is only the light that shines away the shapes and forms and fears of nothing," a typical passage reads.

One prominent figure who was deeply influenced by "A Course in Miracles" is former presidential candidate Marianne Williamson. In 1996, Williamson wrote a book, "A Return to Love: Reflections on the Principles of 'A Course in Miracles,'" that was structured as a reflection on the original text. Williamson, too, has used the term "lightworker" before; in a 2013 Facebook post, Williamson wrote, "A light-worker is not someone who ignores the darkness; it's someone who transforms the darkness."

Obviously, Williamson and Trump are political opposites; Williamson, a Democrat, came down hard and repeatedly on Trump's policies during her 2020 campaign. Salon asked Williamson what she thought about the term "lightworker" being used to describe Trump. She replied via email: "I think it's insane. . . . Like many others, I don't understand it but I find it deeply disturbing."

When asked why he believes people have been so eager to embrace this belief that Trump is a "lightworker," Remski said that it is because it can "offer all of the benefits of the conspiratorial mindset, without a lot of the drawbacks."

"Because you're saying something kind about him," Remski said, "as the social psychologists basically repeat over and over again."

Remski believes conspiracy theories are attractive because they "satisfy epistemic needs." "Like, 'I'm now I'm going to know something that nobody else knows,' or 'I'm going to meet my survival needs, meaning this information is going to help me tolerate what's happening, but also maybe even preserve me from danger,'" he said.

But as the social media spread of the "lightworker" theory illustrates, conspiracy theories also open up their adherents to communities of people that they can hang out with, Remski mused.

*This story was updated at 10:01 pm ET to clarify Remski's quote.