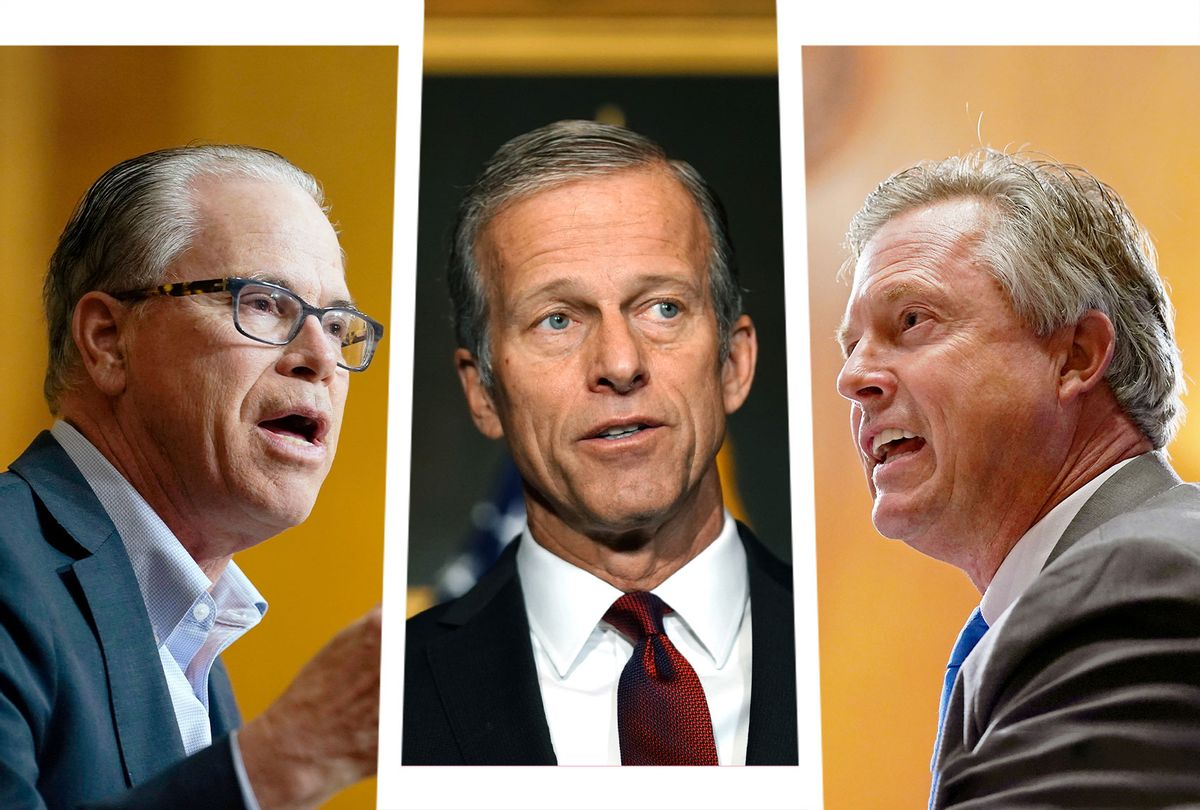 Republican senators are using a massive coronavirus relief measure now working its way through Congress to advance two major culture-war issues that are central to the GOP political agenda but completely unrelated to the pandemic: restricting affordable access to abortions and punishing schools that allow transgender athletes to participate in women's sports.

Republicans claim to be vehemently and unanimously opposed to the $1.9 trillion package under consideration because of its cost and Democrats' inclusion of "wish list" items unrelated to the public health crisis. That has apparently not deterred them from attempting to pass their own irrelevant provisions.

"The unrelated liberal policies are simply endless," Senate Minority Leader Mitch McConnell, R-Ky., said in a floor speech Friday. "It's like they've forgotten we have a pandemic to fight."

Finding ways to restrict or deny abortion access has been a central Republican tactic for years. But in a larger context, the targeting of women's sports represents a relatively new front in the culture war, one that Republicans apparently feel confident will be a winning issue at the polls in a post-Trump world. The topic has received unrelenting attention from conservative media and national Republicans, including from former President Trump himself at last week's Conservative Political Action Conference in Orlando.

These amendments have no political viability in the COVID legislation or anywhere else, given the Democratic majority in both houses. Congress' makeup. But they mark a miniature opportunity for Republicans to force the fight to the forefront by using the Senate's procedural rules and forcing lawmakers to take official stances on the underlying issues.

Sen. Roger Marshall, R-Kan., filed an amendment that would prohibit "funding for schools that allow transgender
athletes in female sports." Sen. Tommy Tuberville, R-Ala., filed a nearly identical one, demanding: "No funds for schools that allow biological males to compete in girls' sports." Republicans in a slew of states have tried to prevent trans athletes
from participating in female sports, including through congressional legislation. An executive order from President Biden, shortly after taking office, put protections in place against discrimination based on sexual orientation and gender identity.

Marshall, along with GOP Sens. Mike Braun of Indiana and John Thune of South Dakota, filed separate amendments that seek to limit accessibility to abortions by preventing certain pots of money from funding health care plans or medical institutions that provide the procedure.

Thune, the minority whip, filed an amendment to modify the Internal Revenue Code of 1986 to forbid pre-taxed money in health savings account to be used to pay for abortion services. That proposal mirrors a bill filed by Thune earlier this year, which is co-sponsored by 19 of his GOP colleagues, and a separate one pushed by Rep. Virginia Foxx, R-N.C., in 2017.

Braun's amendment would bar federal funding for continuing health care coverage under COBRA to go toward abortions. He and other Republicans introduced a similar proposal under the previous Congress that was backed by 32 other GOP senators.

Marshall's amendment would prohibit small-business loans through the Paycheck Protection Program from going to abortion providers, such as Planned Parenthood. The nonprofit reproductive health care provider was embroiled in controversy last year after its individual chapters received some $80 million, prompting demands from congressional Republicans and even the Small Business Administration to return the taxpayer funds over allegations it was too large an entity to qualify.

The organization stood by its need and qualifications for the loans, chalking up the outrage to a "clear political attack." The group argued that its individual chapters acted independently, and therefore met the requirements.

More than two dozen Republican senators, including Braun, penned a letter in January to the SBA demanding the return of the money.

Braun, Tuberville and Thune's offices did not respond to Salon's requests for comment.

A spokesperson for Marshall said that both of his amendments "certainly align with COVID."

"The first one even references PPP in the title, which is a program that was created due to COVID," the spokesperson said. "On the other one, with the amount of money in the overall bill going to education ($170 billion), Sen. Marshall wants to ensure equal opportunity for female high school and college athletes."