QAnon is not going away any time soon. The people who believe it simply need it too much 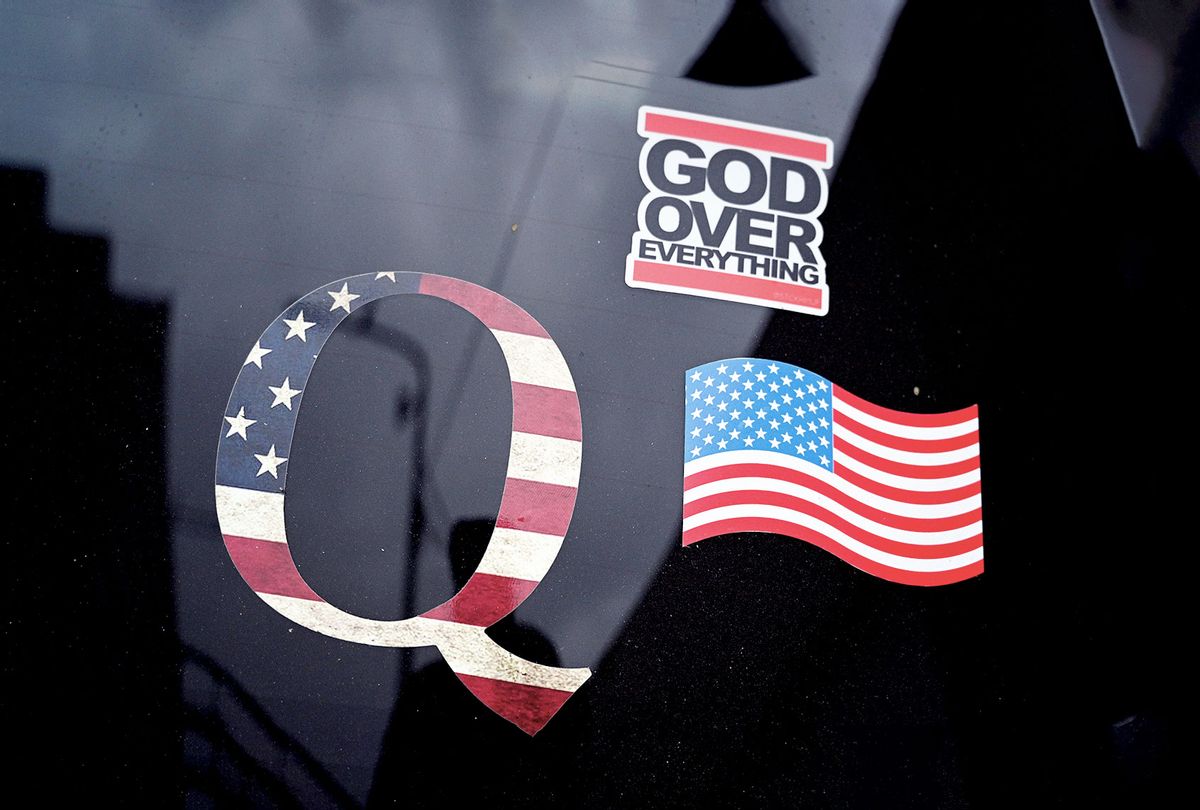 A QAnon sticker is seen on the back of a car on November 6, 2020 in Los Angeles as the entire nation awaits the result of the presidential election. (ROBYN BECK/AFP via Getty Images)
--

The day of "The Storm" keeps moving for QAnon, the loosely-affiliated cult that sprang up online with Donald Trump as its god-like savior figure. At first, the belief was January 6 was the prophesied day when Trump would supposedly ascend to his true power and have all their political enemies, who QAnon adherents believe are blood-drinking pedophiles, arrested. After all, Trump himself repeatedly signaled that January 6 was "go" time and the faithful did as they were told, storming the Capitol in an effort to turn the prophecy into reality.

That failed and many QAnoners found themselves in handcuffs while their leader, Trump, escaped without consequence. But while some got disillusioned and dropped off, many more just did what cultists do and moved the day of the prophecy down the calendar, to March 4 as the new day for Trump would ride into town and kick Joe Biden out of the White House, kicking off "The Storm" for real.

As Giovanni Russonello reports in the New York Times, however, as March 4 grew closer, the QAnon ringleaders started to get cold feet, knowing as they did that "reports" that Trump would take the White House that day were pulled directly out of their nethers. Many of them "started throwing cold water on the March 4 idea, though it had been theirs in the first place," he reports. They realized "it might not be wise to bring a group of fervid supporters to Washington for the arrival of a leader who doesn't show up," and started instead to float conspiracy theories blaming "antifa" — which is the bogeyman they blame most things on — for stirring the pot around the March 4 date in the first place.

The concern is quite clearly that, if another prediction fails to pan out, the QAnon cult will start to grow disillusioned and dissipate, which means that these ringleaders will lose the cash stream they've generated by churning out an endless supply of prophecies and "bread crumbs" to the deeper conspiracies for their followers to gobble up. But, in truth, these grifters shouldn't worry too much. While the prophecies make QAnon exciting, at the end of the day, that's not why people get caught up in the cult.

There's a reason why so few of them left after their failed January 6 coup and why few will leave now that it is clear March 4 was a dud. Much has been written about the phenomenon of people not leaving cults, even after the dates of splashy prophecies come and go without the predicted events happening. A lot of it comes down to rationalization and an unwillingness to admit that they spent so much time and energy on something that turned out to be fake. But a lot of it has to do with the reasons they joined the cult in the first place, whether it's seeking meaning or community or excitement. Those desires don't disappear just because the prophecies failed. And so the believers will continue to find excuses to stick by the cult and continue deriving what they see as a benefit of belonging.

What drives people to the QAnon cult  — as well as the other groups, such as the Proud Boys and Oath Keepers, that contributed to the January 6 insurrection — is ultimately a grotesque mix of wish-fulfillment fantasies and an abiding sense of white entitlement. These are folks who are absolutely certain that they deserve to be in charge, no matter what, and that belief feeds their attachment to increasingly complex conspiracy theories that promise that there's a "secret" rule or law that can be activated that will allow them to overcome a democratic election and install their preferred president in his place. They are in a search of a cheat code to defeat the big boss, if you will, and in this case, the big boss is democracy.

The entitlement wafting off the QAnoners is both funny and unbelievable, creating a constant churn of can-you-believe-these-people stories about those arrested for their role in the January 6 insurrection. Just this week, for instance, Richard Barnett — the insurrectionist who proudly let himself be photographed while vandalizing Speaker of the House Nancy Pelosi's office — threw a childish temper tantrum in court upon hearing his court date would be set for May.

It's "not fair" he shouted at the judge, complaining that the "government keeps dragging this out and letting everybody else out" and he doesn't want to be in jail for another month. The whole thing was so ridiculous that Rachel Maddow even acted out the transcript on her show Thursday night.

Similarly, clips from a "60 Minutes+" interview with Martha Chansley, the mother of "QAnon Shaman" Jacob Chansley, have gone viral because she is every inch of that terrible mother who believes her baby can do no wrong and will say any fool thing she needs to defend him. ("Him," in this case, being a grown man, not that you'd know it from her mama bear act.) She continues to insist her son is an innocent lamb and was merely enjoying his "right to free speech and to stand up for what you believe is right." She also defends the cause, claiming, falsely, that the election "was won fraudulently."

These stories are so compelling because they underscore the off-the-charts sense of entitlement that drives people into QAnon and various other Trump cults. Many of these people really do think they're above the law, and shouldn't have to deal with things like consequences for their actions or the results of a lost election. They are always seeking a cheat code they know must exist, just for people like them, that allows them to peace out of the normal rules that everyone else has to follow. And one thing QAnon, with all its intricate conspiracy theories, feeds is this sense of entitlement and the belief that there's a secret button that adherents can push that will make all those annoying problems — like that Democrats have the right to vote and hold office — just go away. One such conspiracy theory, in fact, was driving the push to define March 4 as the new day for "The Storm."

As explained by Shayan Sardarizadeh at the BBC, QAnoners developed this theory that the "real" inauguration day is March 4 by leaning on cockamamie theories, drawn by the "sovereign citizens" movement, that the United States ceased to exist as a legal nation in 1871, and therefore all laws and constitutional amendments from then on are invalid. The sovereign citizens movement is a long-standing far-right push by people who have long believed they have found the secret loopholes in American law that allow them to declare themselves above paying taxes or fulfilling other duties as a citizen. Their alignment with QAnon, in retrospect, was entirely predictable.

The whole thing is held together by a bunch of white people believing themselves superior to others and therefore entitled to be above the law, which drives them towards increasingly bonkers "theories" to justify this feeling. It's why so many of the January 6 rioters didn't even think to conceal their identity, and why they keep seeming to think that they'll wake up any day now and all those consequences will evaporate. It's why they love Trump, who spent his political career bragging about how he knew his way to work around any system and convinced them he had some secret plan to overturn the election.

So, no, QAnon is not going away any time soon. The people who believe it simply need it too much. They need it to justify their racism, their sense of entitlement, and their childish unwillingness to admit they aren't, in fact, secretly superior to everyone else. As long as the cult keeps feeding those feelings, the QAnoners will stick around, no matter how many prophecies fail.