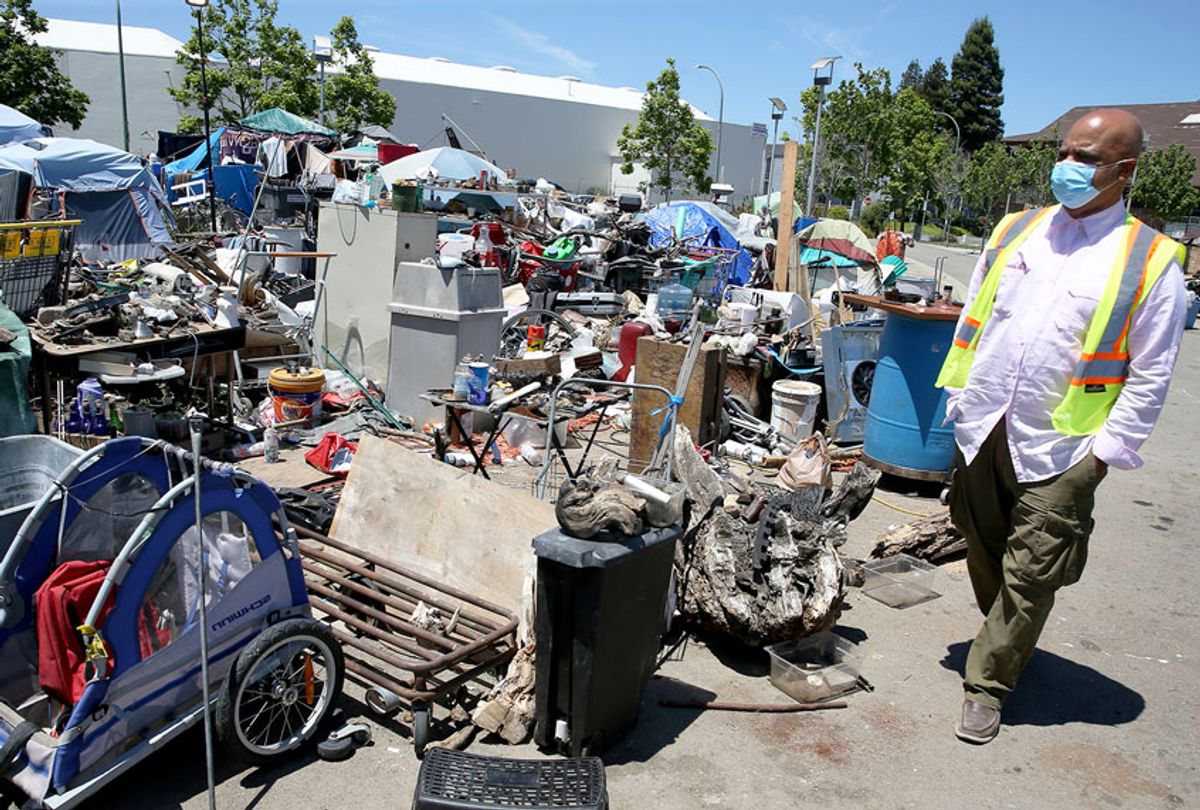 Preston Turner walks through a homeless encampment at Union Point in Oakland, Calif., on Wednesday, May 27, 2020. The city of Oakland is trying to get coronavirus testing for homeless people. (Jane Tyska/Digital First Media/East Bay Times via Getty Images)
--

Lawmakers working on a new relief package to mitigate the ongoing coronavirus crisis shouldn't hesitate to go big considering that a majority of U.S. voters say the government spends "too little" on healthcare, education, and anti-poverty measures, according to a new Hill-HarrisX poll released Tuesday.

The poll, conducted online from February 12 to 15 among 2,835 registered voters, found that 57% of the electorate thinks the federal government doesn't spend enough to combat poverty, while 56% want to see more investment in education.

As Common Dreams reported last year, the $1,200 stimulus checks and enhanced unemployment benefits distributed to Americans through the CARES Act passed in March 2020 reduced poverty even in the midst of an economic calamity driven by the Covid-19 pandemic, providing evidence that substantive anti-poverty programs are effective.

As the House prepares to vote Friday on its version of President Joe Biden's American Rescue Package, nearly half of voters (49%) say the country should spend more on coronavirus relief. Among Democrats, that figure jumps to 58%, while half of independents and 38% of Republicans agree.

In addition, 56% of those surveyed say the government spends too little on healthcare. While increased investments in public health would be welcome in the wake of a pandemic that has claimed the lives of more than 500,000 people in the U.S., improving health outcomes nationwide may not depend on spending more.

As Common Dreams has reported, the Congressional Budget Office found that implementing a single-payer health insurance program like Medicare for All would guarantee coverage for every person in the country while reducing overall healthcare spending by $650 billion per year.

Notably, 43% of voters said the government should spend more on national security, despite the fact that throwing more money at endless wars is at odds with increasing public investments aimed at improving social and environmental well-being.

As Sen. Elizabeth Warren (D-Mass.) said about the Pentagon budget earlier this month, "After the past year, watching more than 400,000 fellow Americans die, tens of millions unemployed due to Covid-19, millions more who are lined up at food banks, and even millions more who are on the threshold of losing their homes and being put out on the street, spending $740 billion dollars a year on this one piece of the federal budget is unconscionable."