Republicans are radicalizing Senate Democrats on the filibuster 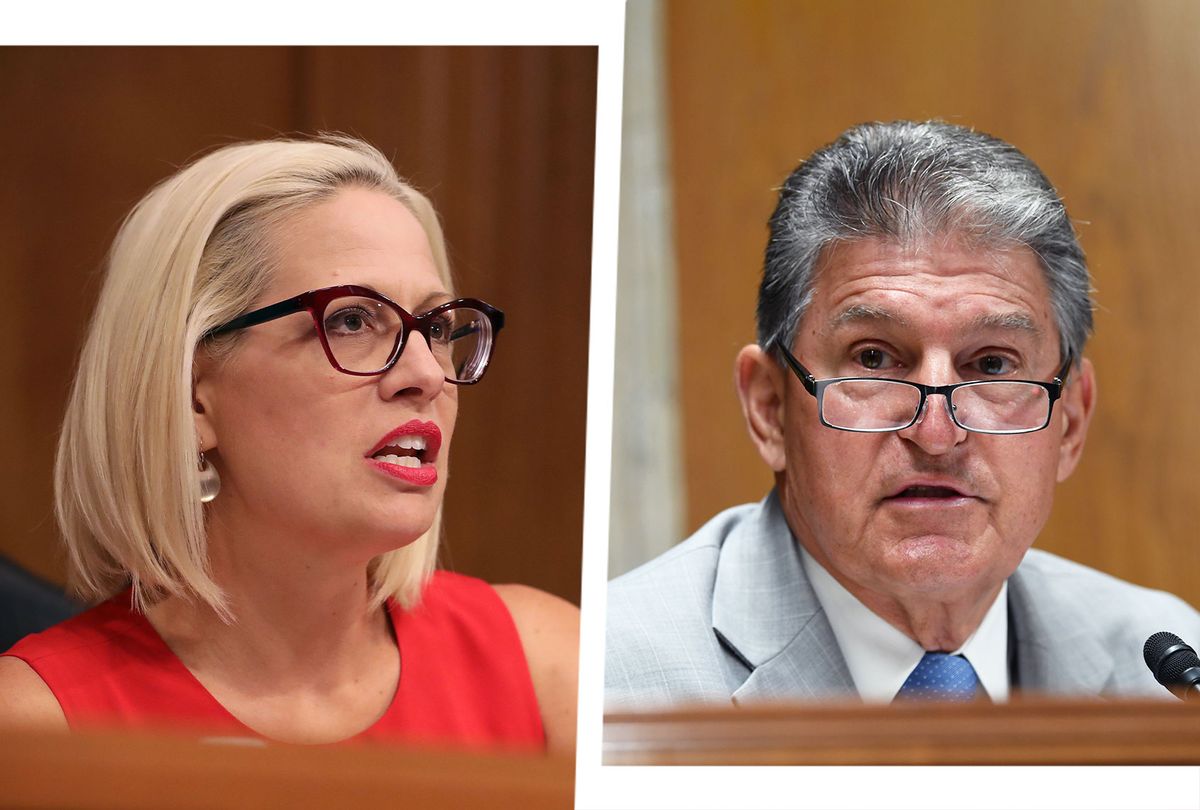 President Joe Biden and the Democratic Congress scored a huge victory this weekend with the passage of the $1.9 trillion COVID relief bill in the U.S. Senate. It is a major accomplishment that, if signed into law, gives the average family of four more than $7,600 right away, makes Obamacare more affordable for more people, provides $27 billion in rental assistance and much-needed help to cities and states, and finally establishes a child allowance of $3000-$3600, which will hopefully become permanent over time. Upon the package's passage, none other than Sen. Bernie Sanders, I-Vt, gave this statement:

I'm still a little bit shocked that they actually made it happen considering how fraught these negotiations have always been in the past. Yes, there was the disappointment of losing the $15 an hour minimum wage provision and there was a last-minute delay of 10 hours as the Democrats had to soothe the sore feelings of Joe Manchin, D-WV, when he found out they failed to run a minor change by him. But when you look back on previous big pieces of Democratic legislation, such as President Clinton's 1993 tax bill or President Obama's 2009 health care bill, this one, with such a gigantic price tag, was passed relatively easily. And as with both of those earlier bills, no Republicans voted for it.

This is not a new phenomenon, which makes this New York Times headline laughable:

Bipartisanship has been dead for nearly 30 years, at least when it comes to Democratic initiatives. Yet Republican legislation rarely suffers the same fate.

Back in 2001, when the Senate was at 50-50, as it is now, 12 Democrats crossed the aisle to vote for George W. Bush's tax cuts for the rich. Perhaps some of you might remember the names John Breaux of Louisiana, Blanche Lincoln of Arkansas, Mary Landrieu of Louisiana, Tim Johnson of South Dakota? There were currently familiar names, like Dianne Feinstein from California and Bob Torricelli from New Jersey, as well. Five Democrats just skipped the vote altogether and two voted present. In the House, 28 Democrats supported the bill, from states that included New York, California, Michigan, Minnesota, Oregon and Washington, while another 29 House Democrats didn't vote.

The vote was before 9/11 so it wasn't driven by the compulsory "national unity" bipartisanship that ruled Washington for several years after the attacks. It was just the way these things always played out. Republicans would hang tough and all but one or two wouldn't even pretend to negotiate in good faith on a Democratic proposal unless the government was shut down or a national security emergency was at hand. The Democrats, on the other hand, would always have a "gang" of some sort that would accept some shallow compromise in the name of bipartisanship, often led by a showboating diva who looked in the mirror and saw a president. It's hard to know if Democratic Sens. Joe Manchin and Kyrsten Sinema are going to play that role in this Congress despite all the drama over the past few days.

Sinema had her moment when she ostentatiously gave a John McCain thumbs down tribute to the $15 an hour minimum wage plan, but it didn't really sing since seven other Democrats voted with her. And Manchin pouted for a bit and demanded a token concession but he didn't pull a full Joe Lieberman (the former Connecticut senator who single-handedly killed the Public Option in Obamacare) and fully gut an extension of federal unemployment benefits, a vital piece of the bill. But it's pretty clear that the dynamics we saw last week in the Senate show how we can expect the rest of the agenda to play out if the Democrats manage to end or reform the filibuster.

And there is a bit of good news on that front.

It appears that 48 Democratic senators are now on board with some kind of reform. Senator Bob Casey of Pennsylvania, at one time a dependable "moderate," explained to MSNBC on Sunday that's he's been radicalized on the issue:

Look, major changes to the filibuster for someone like me would not have been on the agenda even a few years ago. But I'm tired of it. The Senate does not work it used to. This idea of the Senate of old just doesn't make any sense anymore. We've got an unyielding, partisan, ideological foe in the Republican party and they won't allow major legislation to come forward.

While both Manchin and Sinema have said they will not vote to eliminate the filibuster altogether, according to Josh Marshall at Talking Points Memo, Sinema indicated in a letter to a constituent that she may be open to reviving the talking filibuster because today's "virtual" version makes it just too easy. And this weekend Manchin seemed to indicate the same:

He repeated a version of this on every show he was on which indicates that he is looking at one of the "mend it don't end it" arguments that will allow the recalcitrant senators to say they are actually preserving the filibuster for the future even as they make it at least possible to pass legislation over an obstructionist Republican party.

According to this piece by Ian Millhiser at Vox, which lays out a number of proposals for filibuster reform, this return to the "talking filibuster" was proposed in 2012 by Sen. Jeff Merkley to ensure that "senators who feel that additional debate is necessary would need to make sure that at least one senator is on the floor presenting his or her arguments." If no senator is present who wants to continue, the presiding officer of the Senate would rule that the debate was over and would schedule a simple majority vote for cloture. There are a number of other tweaks to this idea that could be enacted as well.

If you think that the Republicans would simply take to the floor to read the entire Dr. Seuss oeuvre, as they seem to be doing on a regular basis these days, you might be right. But the process that we just went through with the Covid relief bill was actually a bit of a dry run on this concept. Reconciliation allows for what they call a "vote-o-rama" allowing endless amendments to the bill, similar to the filibuster. As you can see, it didn't take long for Republicans to lose interest. The bill passed in a couple of days. The "vote-o-rama" was a dud because they are always duds. Republicans love to pull the stunt but they never follow through. And frankly, I don't think they will follow through with talking filibusters either.

In fact, we may be coming to an end of this era of obstruction to a time when they literally do nothing when they are in the minority. Why? I think they are sure they have the Supreme Court in their pocket for the next generation so now they can spend all their time ranting about Mr. Potatohead and just let their Supreme Court majority do their dirty work for them. Why even bother to filibuster at all?