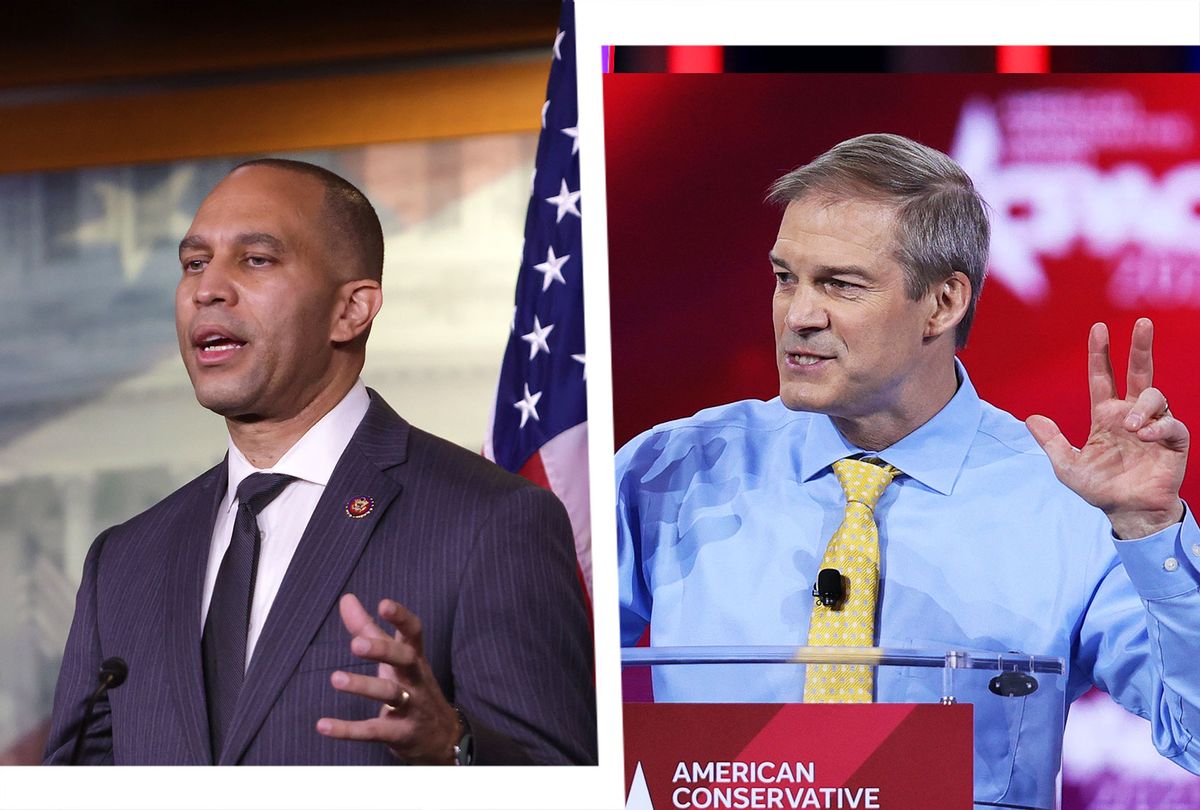 Reps. Jim Jordan, R-Ohio, and Rodney Davis, R-Ill., have demanded that House Administration Committee Chairwoman Zoe Lofgren, D-Calif., ensure that Fox News and One America News Network will remain available to members and staff via Congress' internal television system. The demand, which came in the form of a letter on Tuesday, was in response to a push by two Democrats for cable, satellite and streaming companies to combat misinformation and conspiracies by dropping outlets like Fox News, OANN and Newsmax.

Jordan — the hardcore Trump loyalist and ranking member of the House Judiciary Committee, known for rarely wearing a jacket — and Davis also demanded that Newsmax, a far-right media outlet that has seen its popularity grow among disgruntled Fox News viewers, be added to the list of channels. A press release from Jordan's office stated that such a decision would "demonstrate the House's commitment to rejecting cancel culture."

The GOP duo's focus on which channels Capitol Hill viewers can access is emblematic of the much larger Republican strategy — or reflexive impulse — to focus on hot-button culture issues. Their Democratic colleagues, meanwhile, were busy reassuring reporters that they would emerge united ahead of a forthcoming vote on more coronavirus relief that is expected to pass on party lines.

Just weeks into President Joe Biden's tenure and their hard-won majority in both houses of Congress, Democrats are aware they're gambling by proceeding with a nearly $2 trillion package without the backing of a single Republican lawmaker.

But leading Democrats say they're largely OK with that, betting that public opinion will outweigh the barrage of GOP attacks they are sure to face through next year's elections for appropriating such a "partisan" and expensive aid bill.

In the meantime, many Republicans have been fixated on trying to rid society of what many conservatives claim is a far more looming political and societal threat: "cancel culture."

Democrats say they see this as a welcome distraction.

"Heaven forbid we pass something that's going to help the damn workers in the United States of America! Heaven forbid!" Rep. Tim Ryan, D-Ohio, said in a passionate floor speech. "Now, stop talking about Dr. Seuss and start working with us on behalf of the American workers."

Democrats' steadfast pursuit of yet another hefty spending bill to combat the pandemic — despite zero Republicans voting for their legislation — has been largely driven by two main factors. The first is that millions of struggling families teetering on the financial cliff can be rescued by quickly injecting money into the economy. The second, not unrelated, is that voters really seem to like it.

Public polling has shown that while GOP lawmakers in Congress rebuke the "socialist" and "wasteful" relief, support among regular Americans transcends across party lines, even in a climate of intense partisan division and heightened attention to the details.

There's a lot of wobble in those Republican numbers, but what's apparent is that the plan is far more popular among GOP voters than elected officials. Jeffries was unable to offer an explanation for the disconnect, conceding that it too was "unclear" to him.

The legislation's relative popularity among Republican voters is striking, given the fierce criticism GOP members of Congress have directed at their Democratic colleagues and the Biden administration for failing to trim down its size and scope to win them over.

"Clearly, when you look at the priorities of Speaker Pelosi, it's to spend as much money as quickly as possible on her socialist agenda and to turn her backs on those of us who want to work together to confront this virus and to safely reopen our economy and our schools," House Minority Whip Steve Scalise, R-La., told reporters.

Combating cancel culture has clearly emerged in the early days of the Biden administration as a central theme of Republican messaging. Whatever the downside in the short term, GOP leaders clearly feel this is a winning strategy among its base.

This theme has been dominating airtime in the conservative media world. Fox News, for example, made twice as many references to "cancel culture" over the past week than it did to "COVID relief bill," according to data from Lexis Nexis reported by CNN.