A (culture) war of desperation: Without Trump, Republicans wage their last stand

Trump let the racist genie out of the bottle 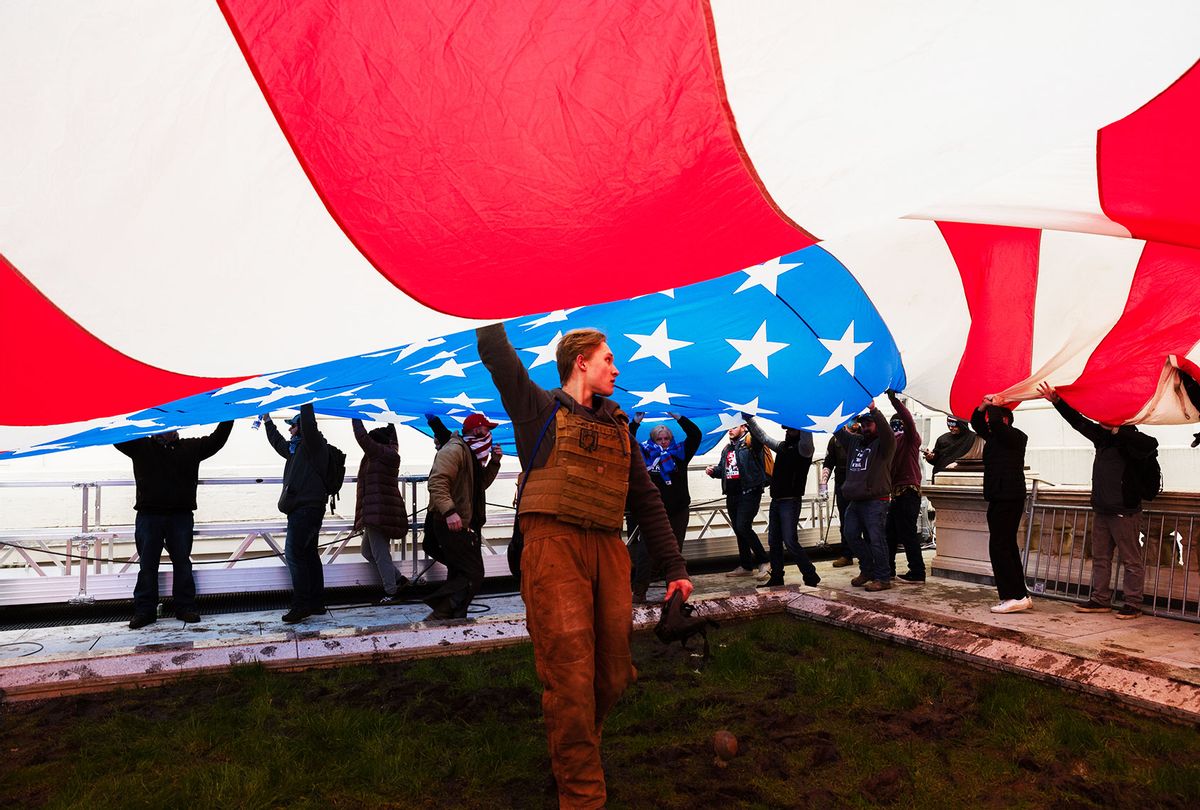 A group of pro-Trump protesters raise a giant America Flag on the West grounds of the Capitol Building on January 6, 2021 in Washington, DC. A pro-Trump mob stormed the Capitol earlier, breaking windows and clashing with police officers. Trump supporters gathered in the nation's capital today to protest the ratification of President-elect Joe Biden's Electoral College victory over President Trump in the 2020 election. (Jon Cherry/Getty Images)
--

Back in the 1970s and 80s, a group of young Republican campaign operatives and consultants, including familiar names from today like Karl Rove and Roger Stone, took up the baton that was dropped when Richard Nixon's crooked men all went to jail. One of them was a canny strategist from South Carolina named Lee Atwater, who became powerful and famous first working for hardcore racists in his home state, then joining the Reagan revolution and finally becoming campaign manager for George H. W. Bush in 1998. Atwater gave an infamous interview in 1991 in which he explained how conservatives had been able to win for years by simply screaming racial epithets, only for the strategy to backfire as the country evolved:

So you say stuff like, uh, forced busing, states' rights, and all that stuff, and you're getting so abstract. Now, you're talking about cutting taxes, and all these things you're talking about are totally economic things and a byproduct of them is, Blacks get hurt worse than whites.… "We want to cut this," is much more abstract than even the busing thing, uh, and a hell of a lot more abstract than [the "N" word.]

Such dog whistles, phrases that only racists understand as racist, are repeated over and over again by the right-wing media and Republican politicians until the subliminal meaning becomes so reflexive that GOP voters can't articulate why terms like "tax and spend" evoke such an emotional response in them.

Consider the violent reaction against Obamacare, a health care program designed to benefit people of all races who weren't covered by employer insurance or some other program like the VA. Republicans lost their minds over it and they were never really able to explain why except for some vague notion of a government takeover of everyone's health care despite the fact that the program was backed by the insurance and hospital industries. Republicans just rejected the reforms rooted in right-wing ideas initially pushed by the Heritage Foundation and Mitt Romney automatically and it's clear their fury was even more fueled by the fact that such a program had been championed by the first Black president. Obamacare pushed every button the Republican strategists had built into their narrative for the previous 40 years.

So by the time Donald Trump finally committed to running for president as a Republican, he didn't have to care about or be inconvenienced by even the slightest of subtleties such as a dog whistle. He just spewed blatantly racist rhetoric all over the place and it turned out that it was exactly what those Republican voters had been yearning for.

Back in 2016, I wrote a piece for Salon called "Nothing Left But The Dog Whistle" when it became clear that all the right-wing intellectuals' worship of Ayn Rand and paeans to free markets had no substantive meaning in themselves to their base voters. They wanted their red meat plain and sizzling and they loved that someone was finally feeding it to them. Five years later, Trump has been defeated, the country is reeling from the wreckage he left behind with the Democrats back in charge trying to clean up the mess. To the extent the GOP establishment cares at all about their former small government, laissez-faire ideology, they seem content to make a few passing comments about "liberal wish lists," vote against everything and then go back to delivering shrill diatribes about cancel culture to entertain the faithful on Fox News. And as a Media Matters analysis found, the right-wing media's coverage of the $1.9 trillion COVID relief bill expected to pass in the House of Representatives on Wednesday has been lackluster as well. Fox News and company are all much more concerned with the culture war battle of the day.

And whither the venerable conservative economic institutions like the Chamber of Commerce and the Club for Growth? The Chamber endorsed the COVID bill. The fact that GOP officials didn't even blink tells you everything you need to know. The Club for Growth lobbied GOP senators to vote against President Trump's first COVID relief bill last March and were similarly ignored. They haven't been heard from since.

This would have been unimaginable a decade ago. In fact, we don't have to imagine it. In 2009, they went into hysterics over President Obama's stimulus package that was half the size of this one.

I suspect the Republicans are betting, as many of the experts have predicted, that the economy is going to rebound sharply once the pandemic is under control and they may be looking at a very robust recovery going into the midterms anyway. Trying to run against that is unlikely to be very popular even with their own voters. So culture war is probably all they've got anyway.

CNN's Ron Brownstein took a look at some recent polling of Republican voters and the results lay out a roadmap for their strategy. He found that in one recent survey of GOP voters, "anxiety about America's changing identity in an era of growing racial and religious diversity has emerged as the core unifying principle of the GOP coalition" with immigration, lack of support for the police (read: Black Lives Matter), liberal media and moral decline as their top issues. A poll in January showed that "roughly 9 in 10 Trump voters agreed with a series of stark propositions: that America is losing faith in the ideas that make the country great, that Christianity is under attack in the US and that discrimination against Whites 'will increase a lot' in years ahead." Virtually all of these people are convinced that there is no discrimination in America against well, anyone except them.

Citing some interesting research in the journal Political Behavior about the role of victimization in American politics, Parker Molloy at Media Matters reports that it was central to both Donald Trump's success as well as a necessary component of right-wing media's hold on its audience. She writes:

This is what's driving the GOP's current assault on voting rights and their mind-numbing obsession with "cancel culture." The racist genie is out of the bottle and after four years of Donald Trump giving voice to all their cultural resentment and anxieties it can't be pushed back in. The Republican establishment has simply lost whatever will they might have had to resist. They have obviously decided that their only chance to stay in power is to join the club.