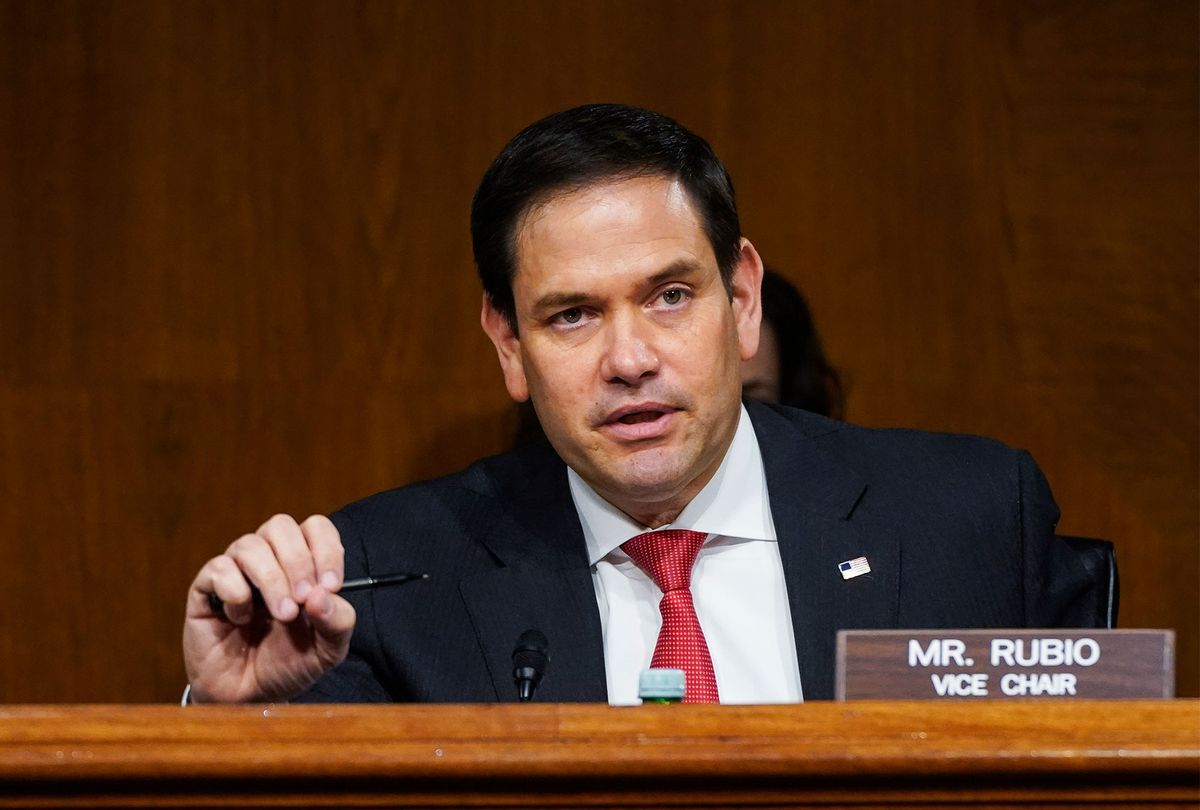 Ranking member Sen. Marco Rubio (R-FL) questions witnesses during a Senate Intelligence Committee hearing on Capitol Hill on February 23, 2021 in Washington, DC. The hearing focused on the 2020 cyberattack that resulted in a series of data breaches within several agencies and departments in the U.S. federal government. (Drew Angerer/Getty Images)
--

The temporary child tax credit provision within Democrats' massive $1.9 trillion coronavirus relief bill could ultimately become a permanent pillar of the U.S. tax code — and could even transform the way the nation handles child poverty.

But any substantial policy change invites bitter partisan opposition, and all signs point toward a major forthcoming political battle between Democrats and Republicans over whether families should continue to receive such large tax savings for children.

The new stimulus, approved Wednesday by the House along party lines and now moving to President Joe Biden's desk for approval, will increase the annual tax credit from $2,000 per child to a maximum of $3,600 for parents with qualifying income. Children aged 6 to 17 would qualify for a $3,000 credit ($250 a month) and those under age 6 would qualify for $3,600 ($300 a month).

The credit will also be offered to parents who are typically ineligible because of low incomes and will be given monthly, providing families with a consistent economic boost. The amount would be phased out for single parents who make more than $75,000 and joint filers who earn above $150,000.

The tax break alone, experts have said, could put a major dent in the number of children living in poverty. The nonpartisan Center on Budget and Policy Priorities estimates the proposal would lift 4.1 million children out of poverty — a 40 percent decrease.

Democrats have made it clear that this is a temporary policy in name only, and they want this major reform to last beyond the COVID pandemic and the current economic downturn. But without future action, those who may rise out of poverty thanks to the credit could fall right back into it once the provision expires at year's end.

That tees up a difficult political battle for Republicans. Public polling suggests the stimulus is widely popular — even though it has zero support from GOP lawmakers on Capitol Hill — and that the child tax credits are even more well-liked. Trying to cancel those credits heading into the 2022 midterm elections could hand the Democrats a golden political issue.

The credits targeting families, along with the various other tax credits included in the legislation, are "going to change lives," House Ways and Means Chairman Richard Neal, D-Mass., told reporters Tuesday.

"One thing you should know about the tax code: getting something out of the code is oftentimes harder than getting something in the code," Neal said. "I've already had some thoughts about how we're going to expand it and make it permanent."

Neal declined to share what those ideas were, or how the new tax credits would be paid for, but added: "What we did is unlikely to go away."

Republicans aren't prepared to let that happen without a fight. They've already argued that the tax credits are an extension of "welfare" that would act as yet another disincentive to work.

One potential solution, Republicans have said, would be to tie the benefits directly to work: If you're not working, you don't get the credit. GOP Sens. Marco Rubio of Florida and Mike Lee of Utah have even said they could get behind as much as $4,500 in credits — if properly incentivized under their criteria. They claim, however, that the current proposal amounts to "universal basic income to all parents." (In Republican Land, of course, that would be a bad thing.)

"That is not tax relief for working parents; it is welfare assistance," the duo said in a joint statement last month.

Rubio went a step further in a National Review op-ed.

"No questions asked and no strings attached. That is not pro-family policy, no matter how much Democrats will claim it to be," Rubio wrote. "If pulling families out of poverty were as simple as handing moms and dads a check, we would have solved poverty a long time ago."

Sen. Mitt Romney, R-Utah, has offered a similar proposal to the Democratic plan included in the relief bill, with one big difference: To pay for the new tax credits, Romney suggests eliminating other assistance and credits for families, which Democrats oppose.

In this partisan battle, unlike so many others of the still-young Biden era, Democrats appear to have Republicans on the defensive — and the American public largely behind them.